Beaked Whale Cruise a Success Despite a Hurricane 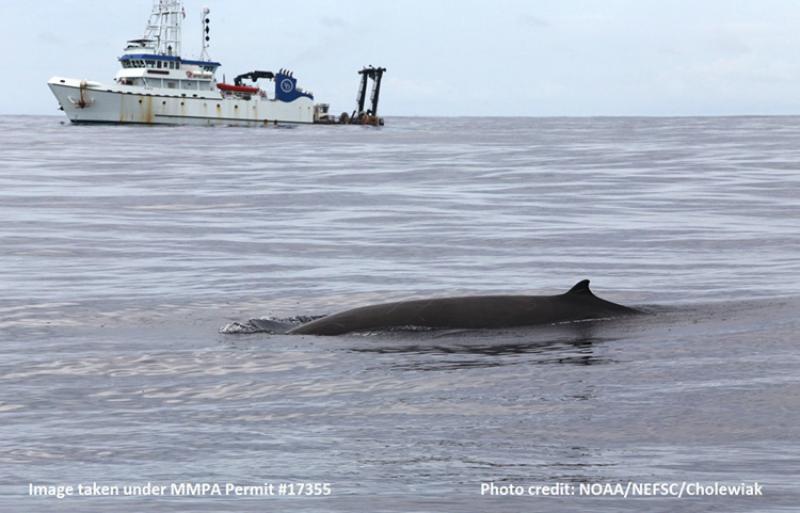 Marine mammal researcher Danielle Cholewiak and colleagues were looking forward to a long-planned 17-day cruise this summer to observe and study beaked whales in offshore waters in the Northeast. Just days before the July-August cruise was set to depart, their research vessel encountered mechanical problems and the work was suddenly in limbo.

As luck and rescheduling efforts would have it, the 146-foot research vessel Hugh Sharp from the University of Delaware was available in September for 12 days, departing from its homeport at Lewes.  Cholewiak, chief scientist for the cruise, jumped at the chance and redesigned the survey track and cruise plans for this new platform and time frame.

“The University of Delaware marine operations team and the ship’s crew went out of their way to help us accomplish what we needed to get done, despite poor weather and an approaching hurricane,“ Cholewiak said. “They provided a great platform when we needed it and allowed us to work offshore as long as possible.  Overall it was a very successful cruise.”

Cholewiak is a research ecologist in the passive acoustics group at the Northeast Fisheries Science Center’s laboratory in Woods Hole, Mass. She and the rest of her nine-member science team departed Lewes on September 9 and headed for Georges Bank, where researchers believed beaked whales would be found based on prior broad-scale ship surveys. Along the way they towed a hydrophone array to listen for whales in Hudson Canyon, Veatch Canyon, and then through the canyons in the Northeast Canyons and Seamounts Marine National Monument. They even towed the array over two moored listening stations to collect data to help validate what those stations are hearing.

“Our main goals were to find different species of beaked whales, particularly True’s beaked whales which had been repeatedly identified for the first time in 2016. We hoped to apply tags to obtain detailed information about their diving behavior. We also planned to acoustically map the distribution of beaked whales near Georges Bank and in the offshore slope areas around seamounts and canyons where some species are  known to frequent,” Cholewiak said. “After a week of very poor weather, things started to turn around. We had three days of great weather to get work done before we had to head back to shore to avoid the brunt of Hurricane Jose, which was headed up the East Coast toward us.”

Although no whales were tagged, the team did document the distribution of beaked whales between the southwestern region of Georges Bank and Bear Seamount, by sighting animals and by recording their vocalizations with passive acoustics using an array of underwater microphones called hydrophones. They found lots of Cuvier’s beaked whales, the most commonly sighted and well-known beaked whale in that area, but more importantly many True’s beaked whales, which have rarely been studied in the wild. Data were also collected on the occurrence of other whale species, sea turtles and seabirds in the area.

“We worked long hours to visually and acoustically track animals during multiple surfacing and foraging dives, matching the real-time sounds we were hearing from the array with the visual observations of specific animals,” Cholewiak said. “We know a lot about Cuvier’s beaked whales and their sounds, so we could easily identify those clicks. Other beaked whale clicks we found came from True’s beaked whales, which we were able to confirm based on the sightings and data from this cruise and from data we collected in 2016. It was really rewarding after overcoming so many obstacles to get this cruise completed. The whole team was really dedicated and did fantastic work.”

Knowing their time at sea was more limited than originally planned, Cholewiak and the science team worked closely with the ship’s crew to get a small boat safely in the water for visual observations,taking photos for later identification, and to collect water samples for eDNA studies at spots where whales dove. Environmental DNA, or eDNA, refers to DNA that is released from an organism into the environment through shed skin, mucous, or feces, and can be extracted from water or soil samples without first isolating a target organism or animal. Once analyzed, the water samples will provide further information about the environment and species verification at that location. The scientists know some beaked whales are found there in July and August but were not sure they would be there in September since so little to known about their habitat use and migration.

“Scientists have only recently started to identify True’s beaked whales, which are even lesser known that Gervais’ beaked whales partly because Gervais’ are found in areas that have been studied,” Cholewiak said. “To go to a spot in the ocean where we thought True’s beaked whales would be and find them, under these circumstances, was really exciting. Add to that the fact we visually and acoustically tracked groups of True’s over multiple dive cycles, each lasting many hours, was a bonus.”

The team did not find any Sowerby’s or Blainville’s beaked whales but didn’t expect to in September, as Sowerby’s seem to live further north and Blainville’s further south. And while weather and time did not allow a survey of the entire Georges Bank area, Cholewiak is looking forward to next summer’s cruise, when they hope to tag some True’s beaked whales and have opportunities to collect more data, allowing researchers to distinguish individual animals from groups. Instead of 11 days, she and colleagues will have about a month to conduct detailed studies of a species about which so little is known.

The R/V Hugh R. Sharp returned to port in Woods Hole September 18 and spent most of the week at the NEFSC’s Woods Hole Laboratory dock riding out the storm before returning to Delaware and resuming their scheduled cruise operations.

The 2017 cruise and next year’s planned survey are part of a multi-year federal agency program known as AMAPPS, for Atlantic Marine Assessment Program for Protected Species. Now in its second five-year cycle, it is focusing on fine-scale research on areas and species of particular interest.  NOAA, the U.S. Navy, and the Bureau of Ocean Energy Management are working together to develop models and related tools to provide seasonal, location-specific density estimates of marine mammals, turtles and seabirds in the western North Atlantic Ocean.  Phase One, conducted from 2010 to 2014, focused on collecting broad-scale data on the seasonal distribution and abundance of these animals using direct aerial and shipboard surveys.