The new stock assessment for butterfish accounted for the effects of ocean temperatures on the distribution of the stock, something that will become increasingly important as the climate changes and the oceans warm. 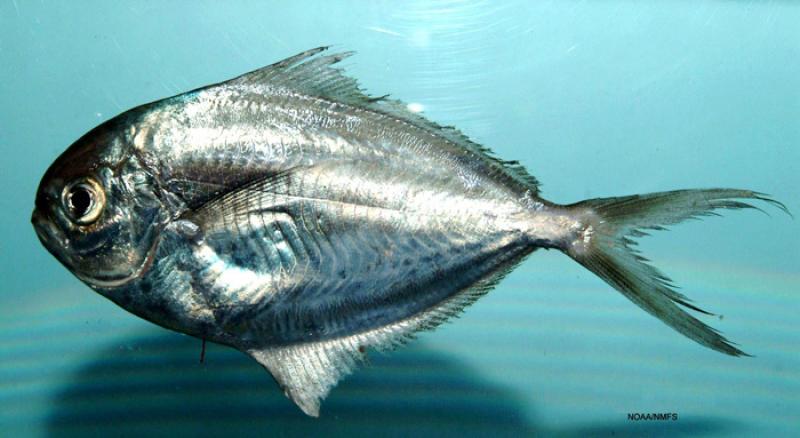 You've probably never eaten butterfish—a small, silvery species that doesn't much appeal to American palates. But butterfish are a favorite meal for tuna and other valuable species, so NOAA Fisheries scientists keep track of their numbers, and the latest stock assessment has good news for fishermen. Butterfish are abundant, and the stock has been declared rebuilt.

But the bigger news isn't the results of the assessment so much as the science that went into it. For this assessment, scientists developed a new method for estimating fish abundance that takes changing environmental conditions into account, something that will become increasingly important as the climate changes and the oceans warm. As we head into an uncertain future, this unassuming little fish is leading the way.

First, the good news for fishermen. Although butterfish aren't eaten much in the United States, they are a popular menu item in Japan, and the new assessment shows that the stock is healthy and can support a substantial fishery. Following the recent assessment, the Mid-Atlantic Fishery Management Council proposed annual catch limits of roughly 20,000 metric tons, and seafood companies are working to develop new markets here and in Japan.

"That means jobs on the boat, jobs at the plant, and fishermen buying more gear." said Gregory DiDomenico, executive director of the Garden State Seafood Association. "People are very much looking forward to getting into this fishery."

Most stocks are declared rebuilt after a period of population growth. But in this case it was our scientific understanding of the stock that grew rather than the size of the stock itself. To estimate stock size, scientists do stock assessments, and the prior assessment for butterfish had a high degree of uncertainty. This made it difficult to set sustainable catch limits precisely, so to be conservative, they were set low. 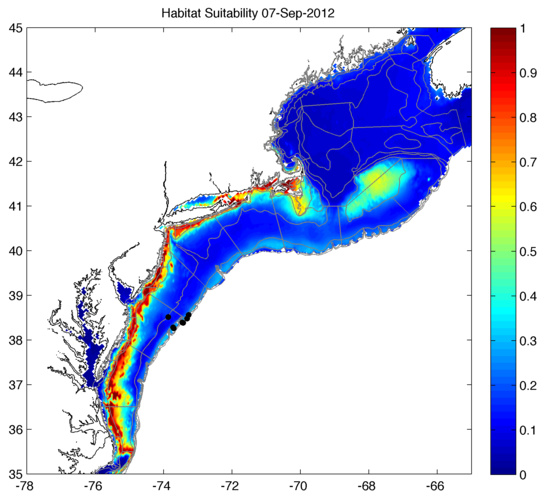 Changes in temperature-defined butterfish habitat off the Northeast U.S. coast from September 7 to November 10, 2012. Red is good butterfish habitat, blue is not so good. The dots show sampling locations for the fish survey that took place during that period. Knowing how much of a species' total habitat the survey sampled can help scientists fine-tune their estimates of fish populations. Map: John Manderson/NOAA.

Much of that uncertainty was caused by the fact that butterfish shift their distribution in response to changing bottom water temperatures. Those shifts can affect the results that scientists get when they survey fish at sea. The breakthrough came when scientists devised a way to account for the effect of bottom water temperatures on the survey results. That reduced the uncertainty enough to set more precise sustainable catch limits.

"By analyzing how butterfish respond to bottom temperature, we were able to nail the critical parameter for the stock assessment," said Paul Rago, NOAA's lead stock assessment scientist for the Northeast region. "That's what allowed us to estimate the total size of the stock."

Including environmental variables in a stock assessment might seem like an obvious thing to do. After all, fish populations, like all wild populations, respond to changes in the environment. But it’s often difficult to know which variable is driving the results. And even if the correct variable can be identified, measuring it accurately can be surprisingly difficult.

The first problem—identifying the key environmental variable—was solved thanks to a close research collaboration between scientists and commercial fishermen, who joined together to form the Open Oceans Working Group. Based on their long experience on the water, the fishermen helped scientists determine that the key variable driving butterfish distribution was bottom water temperature.

The second problem—measuring that variable—was not nearly as simple as it sounds. Scientists needed to estimate bottom water temperatures at a fine spatial scale across much of the Northwest Atlantic. For that, physical oceanographers led by Josh Kohut at Rutgers University ran computer simulations that produced maps of estimated bottom water temperatures going back 40 years. Scientists used those maps to re-analyze the results of past fish surveys and arrive at a reliable estimate of the size of the stock today.

“What we’re trying to do is to get the smartest people involved from academia, government, and the fishing industry, and to develop the science in a less adversarial way,” said NOAA Fisheries scientist John Manderson. “We all want better science.”

In the future, this type of environmental analysis might be more common, especially as fish populations shift in response to climate change. This will require new technology to monitor ocean conditions and enough computing power to crunch the data. But it will also require something more basic—old-fashioned collaboration between scientists and fishermen.

"This shows what we can accomplish when we're all working together," said DiDomenico. "We've still got plenty of other problems to solve, but this one's behind us."