The Bycatch You Can't See 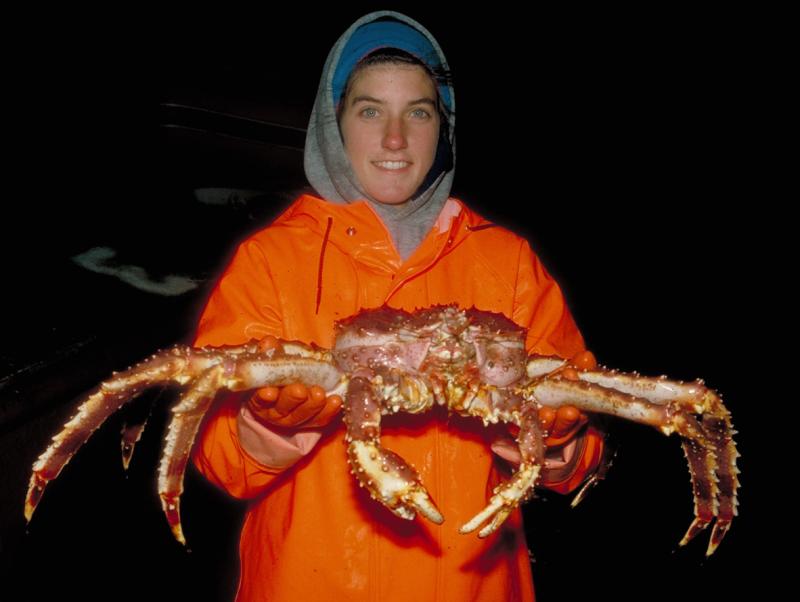 Some of the most valuable fish and crab species in the world mingle on the bottom of the Bering Sea off Alaska. As a result, fishermen chasing groundfish sometimes find red king and other crab in their bottom trawls. Observers on the fishing vessels keep tabs on this unintended bycatch to ensure that it stays within allowable limits, but they can only count the crabs brought up in the net. How should they account for crabs run over by the net and killed but never brought to the surface? That mortality is unobserved, and quantifying it would seem impossible.

And so it was, until scientists came up with a clever strategy for estimating this unobserved mortality. Described in a recently published paper* (see citation in sidebar), their research also gave rise to trawl modifications that significantly reduced the problem. In recognition of both the innovative research design and its role in helping to solve a long-standing problem, the authors won a Best Paper Award from The Fishery Bulletin.

"The only way to have a substantial harvest of flatfish species is with a trawl. The question is how to make trawl fishing as sustainable as possible,"said Craig Rose, a now-retired biologist formerly with NOAA's Alaska Fisheries Science Center and the lead author of the study. "Some people think that's not a tractable question. I believe it is."

Bringing Up What the Trawl Left Behind

The net of a groundfish trawl is pulled by long cables called sweeps. The sweeps open from the mouth of the net like a funnel, and at the wide end, cover a much greater area than the net itself. As they bounce along the seafloor, the sweeps herd flatfish toward the center and into the net. This configuration reduces habitat impacts because the net, which is harder on the seafloor than the sweeps, only contacts a small portion of the swept area.

But unlike groundfish, crabs aren’t meant to be caught and can't be herded. The sweeps pass over them, injure or kill some, then leave them behind. This research estimated what fraction of crabs that encounter a trawl remain on the seafloor and ultimately succumb to their injuries.

"The first challenge was getting those crabs up into our hands," Rose said.

To do that, Rose and his colleagues rigged a typical bottom trawl with secondary nets called underbags. The underbags trailed the main components of the net, including the sweeps, and scooped up crabs left behind. Rear-facing video cameras attached to the net ensured that the underbags effectively captured what the net missed.

Once the crabs were onboard, scientists faced another challenge. Mortality can be delayed, and they would have to hold the crabs in tanks for several weeks to know what proportion of them die from their injuries. "That would require a huge number of tanks and a lot of time," Rose said.

Instead, researchers tested the crabs' reflexes, including antenna response, eye response, and mouth movements. At first, they tested a number of injured crabs, held them for a few weeks, and correlated their reflex response scores with the likelihood that the crabs would die from their injuries. After that, all they had to do was test the crabs’ reflexes to estimate how many of them would die.

The researchers looked at the effects on red king crab, snow crab, and southern Tanner crab. Unobserved mortality rates varied by species, but in most cases were below 16 percent.

A diagram of a typical otter trawl. This trawl is not drawn to scale. In Alaskan flatfish fisheries, the sweeps can be much longer than those shown here. Photo: NOAA Fisheries.

They say you can’t manage what you don’t measure. This research allowed scientists to measure unobserved mortality, and managing it is now possible. Rose and his colleagues designed experimental trawls with rollers that raised the sweeps several inches off the seafloor. They found that raised sweeps were still effective at herding groundfish, but killed roughly 60 percent fewer red king crabs than unmodified trawls. Significant reductions were also achieved for southern Tanner and snow crabs.

John Gauvin, science projects director for the industry group Alaska Seafood Cooperative, was one of the co-authors of the study. "We found that you don't need to be hard on the bottom to herd fish into the net," Gauvin said, "and everything you do to reduce seafloor contact has an added benefit in fuel savings."

The evidence for raised sweeps was so convincing that new regulations requiring them were put in place even before this research was published. Today, all flatfish trawlers in the Bering Sea and the Gulf of Alaska are required to use raised sweeps.

This research would not have been possible without the participation of fishermen. "We do all our research cooperatively with fishermen, on their vessels and using the same kind of gear they use," Craig said. "In many ways they're the experts, and I learn a lot from them."

"We make a point of testing gear under realistic conditions," said Gauvin. "Fishermen and scientists have different perspectives, but there's a lot of mutual respect, and both are focused on catching fish sustainably."

Thanks to this award-winning research, the sustainability of Alaskan flatfish fisheries has been measurably improved.