The Call of the Wild Fish Template 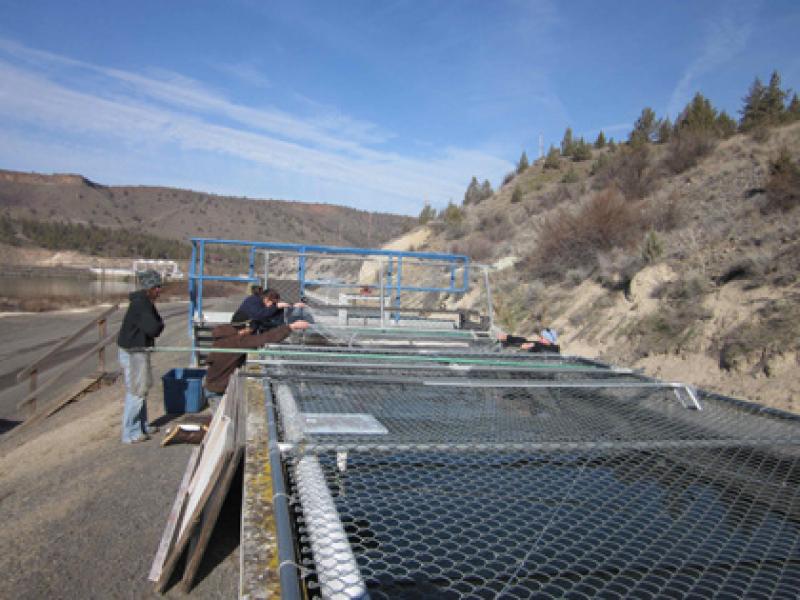 Salmon recovery efforts may have just taken a big step forward, thanks to a collaborative project between the Northwest Fisheries Science Center, the Hood River Production Program, and the Bonneville Power Administration. As detailed in a new research paper published by the American Fisheries Society, NWFSC researchers may have found a way to help fish hatcheries increase productivity while reducing their impact on threatened, wild salmon. The key is in how the eggs are reared to the smolting stage.

A Brief History of Salmon Exploitation on the Columbia River

The first commercial salmon cannery on the Columbia River opened in 1866, focusing exclusively on Chinook salmon. That year, it produced 4,000 cases of 48 one-pound cans each, a total of 192,000 pounds of fish. Not even twenty years later, in 1883, there were more than 50 commercial canneries operating along this river. Together they produced almost 630,000 cases of canned Chinook salmon—that’s over 30 million pounds from a single river basin.

That was the peak. By the next year, production had already begun to fall. Slowly at first, then more rapidly, as the river began to feel the effects of dams, pollution, and unchecked overfishing, the numbers of Chinook on the Columbia River began to drop.

“There is no question but salmon were most plentiful before civilization had begun its work,” wrote R. D. Hume in his 1893 book, Salmon of the Pacific Coast. Hume, one of the founders of the original 1866 cannery, expressly wrote the book to help prevent what he called “the total extinction of this most valuable of food fishes.”

Recovery efforts have been underway ever since. They began, in fact, even before production had peaked. The first salmon hatchery in the area opened in 1877 on the Clackamas River. Today, there are over 200 hatcheries throughout the Columbia River basin. Some are private,  some are run by the federal government, and some are managed by tribes.

Chris Brun is the Coordinator of the Hood River Production Program, a joint recovery effort by the Confederated Tribes of the Warm Springs Reservation (CTWSR) and the Oregon Department of Fish and Wildlife, on the Hood River, a tributary of the Columbia in northern Oregon.

“HRPP was established in 1993,” Brun said, “with three goals: first, to start a hatchery program to rebuild the salmon runs; second, to rebuild the fish habitat that had been degraded; and third, to monitor the success or failure of the first two prongs for adaptive management.”

Brun has been in charge of this program since 2008. At that time, he noticed several inefficiencies in its organization. “The State of Oregon used to collect fish in a trap at Powerdale Dam. We would take this broodstock from the dam, spawn them at our Parkdale facility [on the Hood River], raise them in the Deschutes River, then release them to the Columbia. And we noticed that a lot of the males were becoming minijacks.”

A minijack is what’s known as a precociously maturing male. In the life cycle of a typical Chinook salmon, the smolts head downstream at around 18 months old. They then spend the next few years in the ocean, some even crossing through the Aleutian Islands and entering the Bering Sea. Although they grow large during this time—adults have been reported weighing 100 pounds or more—they don’t return to the river until they are ready to spawn. For some, this may take up to five years.

Minijacks, on the other hand, may never enter the ocean at all. Instead, they remain in their river basins, small yet reproductively mature. They can fertilize the eggs of the returning females, potentially skewing the genetics of the wild fish. And from an economics perspective, they never put on the mass to make them worth harvesting.

Brun wanted to expand the production of salmon on the Hood River while reducing the number of minijacks, which sometimes made up almost 40% of the fish produced in HRPP hatcheries. He contacted the Northwest Fisheries Science Center to see if they could offer any advice.

The Promise of Pelton Ladder

Don Larsen, a research fishery biologist specializing in salmonids at NWFSC, was excited to work with Brun. “So many impactful studies on steelhead, trout, and Chinook have used the Hood River basin as a model,” he explained. “It’s sized very well for research—it’s not too small, but it’s also not unwieldy.”

“It’s always exciting when we can take science and apply it to a real-world problem,” added Brian Beckman, another salmon specialist and Larsen’s NWFSC colleague.

Together, they worked with Brun to design a three-year experiment that would shed light on HRPP’s concerns while leveraging Larsen and Beckman’s expertise in salmonid developmental biology. In the experiment, which began in 2010 with funding support from the Bonneville Power Administration, eggs from a single spring Chinook salmon broodstock were split up and reared in three different hatcheries around the Columbia River basin:  Parkdale, on the Hood River;  Pelton Ladder, on the Deschutes River; and Carson National Fish Hatchery, on the Wind River.

Smolts from Pelton Ladder and Carson were brought back to the Hood River for acclimation before release, and all three groups were released within the same three-day period. In this way, any differences between the groups would be due to differences in the rearing environments alone—namely, the three hatcheries.

Salmon success is measured in the smolt-to-adult return rate, or SAR. The more smolts return as adults to spawn, the higher the SAR and the more successful the rearing group. In order to calculate SAR, the researchers used PIT tags to keep track of thousands of individual fish. From 2010 to 2012, over 40,000 PIT-tagged fish were released as part of this study.

What did they find? In all three years of the study, the smolts with the highest SARs had been reared at Pelton Ladder. Beckman and Larsen then reexamined the SAR data from an experiment they had conducted in the early 1990s that also studied Pelton Ladder smolts. Then, too, they had outperformed all other fish in the study.

So what is it about Pelton Ladder? “Although it’s artificial,” Brun explained, “it’s like a natural river system, with natural water temperatures and lots of foraging food and insects, instead of the managed temperatures and artificial food you see at many hatcheries.”

“It’s almost wild,” said Larsen, “that’s what’s good about it. After all, wild fish have evolved to succeed. So the more closely you approximate what fish experience in the wild, well, that may be a blueprint for success.”

The researchers are calling this the “wild fish template,” and it’s a combination of several factors including water temperature, food abundance, and light. In many hatcheries, production quotas dictate a certain size at release. Hatchery managers often achieve this by maintaining warmer water temperatures and regular day/night cycles throughout the winter, which encourages the fish to eat and grow larger.

“But bigger doesn’t always mean better,” Larsen said. “They grow in weight, but not in length. It’s unnatural.”

“Actually, the fish that did the worst were fed a lot in the winter,” Beckman added.

According to the wild fish template, it’s better to let the fish deal with colder seasonal water temperatures. The fish will naturally fast throughout the winter, then perk up again in the spring as temperatures rise. As the researchers discovered, Pelton Ladder smolts raised on this template were consistently larger, better adapted to saltwater, and far less likely to become minijacks than those from the other hatcheries. They also returned in the greatest numbers as adults.

Brun was very happy with Larsen and Beckman’s experiment. “We asked them where the best place was to rear fish in the basin,” said Brun. “And they said, ‘It’s not about where you rear them, but how.’ They gave us a different answer, which was actually much better than the question we had asked. We could rear all our fish in-basin if we reared them in this different way.”

The researchers were excited, as well. “This experiment showed that we can collaborate and both generate a productive, successful change in management, and create a scientific product,” Beckman said. “Those aren’t always compatible.”

The results of this experiment are being published in the journal Transactions of the American Fisheries Society. The online version is available now, and the print copy will be published later this month.