Canyons, Corals, and Sustainable Fishing in the Bering Sea

Should the Bering Sea canyons be closed to fishing to protect sensitive habitats? Here are a few FAQs about the science and the decision-making.

The Bering Sea off Alaska is home to an enormously productive ecosystem, where the upwelling of nutrient-rich waters fuels a vibrant diversity of marine life, from crabs to whales and everything in between. It is also home to some of the most valuable fisheries in the world, among them salmon, king crab, and the biggest catch of all: Alaska pollock. The continued existence of these fisheries depends on a healthy and productive ecosystem, and our goal at NOAA Fisheries is to make sure it stays that way.

Alaska pollock isn’t only the largest catch in the nation, it’s also one of the most sustainable. With few exceptions, all the large ships that account for the bulk of the catch carry independent, NOAA-trained fishery observers to ensure accurate data on both the catch and the unintended bycatch of other species. Bycatch is managed with closed areas, gear modifications, and limits that, when tripped, trigger closures. And the fishery is managed using a “catch shares” system that gives fishermen a strong incentive to protect the resource.

Most importantly, NOAA Fisheries scientists head out to sea every year to survey pollock. The stock assessments they produce are then used by the North Pacific Fishery Management Council to set sustainable catch limits. This model of fishery management, in which regional councils make decisions based on scientific information from NOAA Fisheries, was established almost 40 years ago. In the decades since, Bering Sea pollock has never been overfished. This record of success is one we are working to replicate across the nation.

But sustainability requires a process of continual improvement, and new issues frequently arise. One such concern is that fishing gear, including the nets used to catch Alaska pollock, may be impacting deep-water coral habitats in the Bering Sea canyons and that to protect them, it may be necessary to close the canyons, or parts of them, to fishing.

The North Pacific Fishery Management Council has initiated a public and transparent process to decide whether and how to protect deep-water coral habitats in the Bering Sea. The role of NOAA Fisheries in this process is to provide independent scientific information and advice to the Council.

The following questions and answers describe cold water corals and the Bering Sea canyons, the scientific research NOAA Fisheries is doing to learn more about them, and the process the Council will use to arrive at a decision. 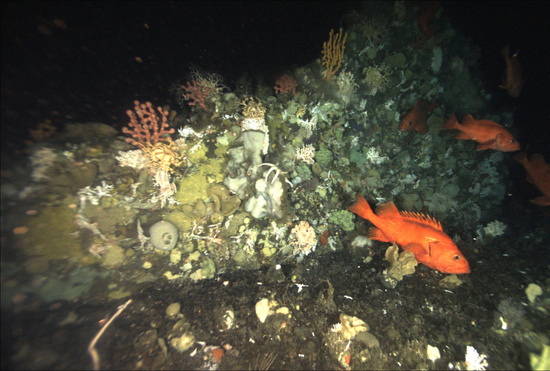 Taken near the Aleutian Islands at a depth of 307 meters, this photo shows bubblegum corals, hydrocorals, and several species of sponges. Corals and sponges provide habitat for myriad species of fish and crabs, including the rougheye rockfish shown here. Photo: NOAA Fisheries

What are deep-water corals?

Many people are familiar with the coral reefs that thrive in shallow, clear, light-filled tropical waters where colorful corals provide habitat for numerous invertebrates and fishes. The corals provide protection and cover, sources of nutrition, and sites for reproduction.

Corals also grow in the deep, cold sea. Unlike their shallow-water cousins, these corals grow beyond the reach of sunlight, so they don’t have photosynthetic algae living inside them to provide nutrients. Instead, they survive by filtering nutrients from the water. Because they live beyond scuba range, we know little about their distribution, biology, behavior, and function as essential habitat for fishes and invertebrates. 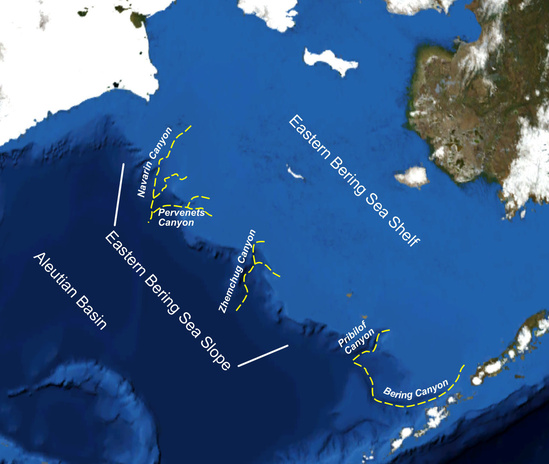 What are the Bering Sea canyons?

Several hundred miles from shore, the bottom of the Bering Sea starts sloping down into the abyss. Most of the slope makes a gradual descent. But in several places, canyons interrupt the regular topography and bite deeply into the slope and shelf. Unlike the V-shaped canyons we’re familiar with on land, these come in a variety of shapes. Some resemble gently sloping amphitheaters. Others are similarly broad, but steeper and more rugged. One of these, Pribilof Canyon, is so broad that its footprint covers about 10 percent of the entire Bering Sea continental slope.

Parts of the canyons contain deep-sea coral communities that are important habitat for myriad species of fish and crustaceans, including valuable commercial species. These coral habitats are vulnerable to damage by fishing gear and, if damaged, take a long time to recover. For this reason, several environmental organizations have requested that the North Pacific Fishery Management Council close the canyons, or parts of them, to fishing.

Do the canyons contain unique habitats?

In 2012, NOAA Fisheries undertook a study to determine just that. Looking at corals, sponges, crabs, and fishes, our scientists found that species composition varied mainly with depth and latitude. But at a given depth and latitude, species composition was similar both inside and outside the canyons. In other words, if you dropped down randomly onto the slope, you wouldn’t be able to say, based on the species you saw around you, whether you were inside a canyon or not.

The study did find areas with relatively high concentrations of corals in the western portion of Pribilof Canyon. However, those habitats extended beyond the canyon and onto the adjacent continental slope. While high compared to the rest of the slope, coral densities there appear to be only about one-fourth those found in the Aleutian Islands area generally, and about one-twentieth those found in the Aleutian Island coral gardens, which were closed to fishing in 2006.

Would closing the canyons to fishing be the best way to protect coral habitats?

The canyons are very large, and vast stretches of them contain little or no coral habitat. At the same time, many areas outside the canyons do contain coral habitat. So if the goal is to protect sensitive habitats, there may be better ways to do that than simply closing the canyons to fishing. 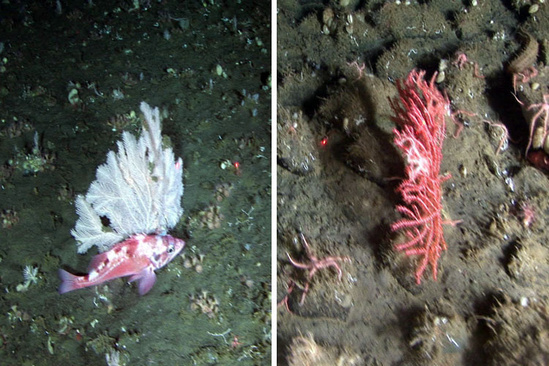 On the left, a gorgonian coral and a Pacific Ocean perch in Pribilof Canyon. On the right, a gorgonian coral surrounded by sea stars in Zhemchug Canyon. Both photos are from a 2007 submersible dive to the Bering Sea Canyons. Photo: Greenpeace USA, NOAA Fisheries, UC Santa Barbara

What about focusing protection on areas that we know have a high density of corals?

Unfortunately, we don’t have enough scientific information to do that today. Although scientists have visited the seafloor a few times in submersibles, the areas in question are far too vast to cover that way. Instead, we use scientific models that predict where corals are likely to occur based on factors such as bottom type, depth, and currents.

Currently these models are very coarse and produce results with a high degree of uncertainty, making it impossible to identify tightly focused areas for protection just yet.

Given this uncertainty, should we take a precautionary approach and close the canyons, or large parts of them, to fishing now?

High uncertainty does generally call for a precautionary approach. The degree of uncertainty in this case, however, will likely be greatly reduced this summer, when NOAA Fisheries conducts the first-ever, large-scale survey targeting corals in the Bering Sea.

The results of this survey will be used to validate and refine our predictive models so they produce finer-scale results with less uncertainty. If there are areas that contain corals in high enough densities to warrant protection, this survey will hopefully help us find them, which would allow for more tightly focused and targeted protections.

Of course, you could use today’s coarse models to close Pribilof Canyon and the adjacent slope to fishing. But that area is vast—more than 10 percent of the entire slope—and closing an area that size could have unintended consequences. If fishermen intensify their effort elsewhere in response, that might increase Chinook salmon bycatch, for instance, or shift any impacts to other habitats. Minimizing unintended consequences requires a focused and strategic approach, and this summer’s survey will help make that possible. 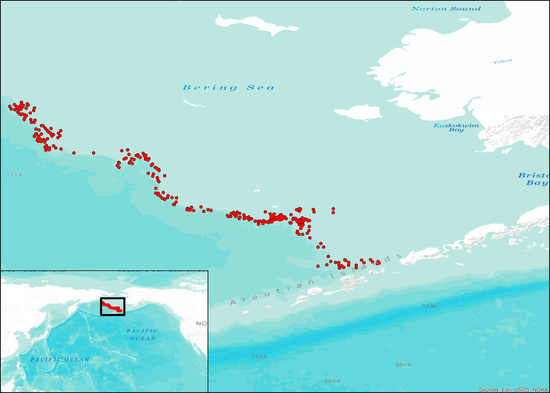 This summer, NOAA Fisheries will conduct the first-ever, large-scale, systematic survey targeting corals in the Bering Sea. Scientist will drop a stereoscopic camera at 300 locations (shown as red dots) along the Eastern Bering Sea Slope that are between roughly 150 meters and 1000 meters deep. Although the canyons reach much greater depths, most fishing, and all trawl net fishing such as that for Alaska pollock, happens at depths of less than 1000 meters. This survey will greatly increase our understanding of the distribution and abundance of corals and other benthic species in the Bering Sea. Map : ESRI, NOAA.

What will we learn from this summer’s deep-sea coral survey?

A large-scale, systematic survey for corals has never been attempted in this area before. The results will greatly increase our understanding of the distribution and abundance of corals in the Bering Sea.

What is the process for arriving at a science-based decision?

At its most recent meeting, in April 2014, the Council approved a motion to determine whether and how to protect corals in and around Pribilof Canyon. They decided to focus on Pribilof Canyon for now because current scientific models indicate that’s where corals are most concentrated.

That motion initiated a series of well-defined steps the Council will follow, including gathering scientific data, collecting public input, and weighing alternative measures. The results from this summer’s survey will inform their deliberations.

This process is open, transparent, and accountable, and periodically pauses to invite public comment. In fact, this is the very mechanism that environmental organizations used to bring this issue to the attention of the Council in the first place. Based on past experience implementing closures elsewhere, the process will likely take 2 to 3 years to complete. 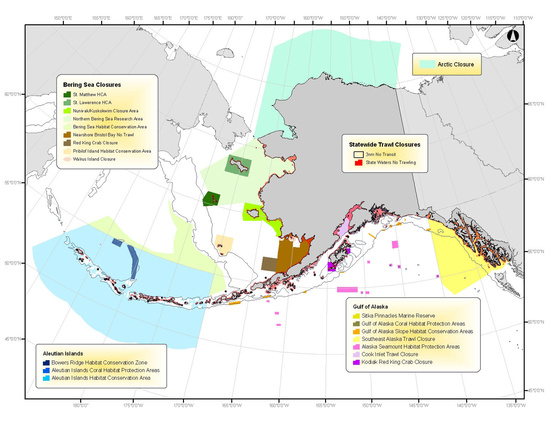 Many areas in the Alaska region have been closed to certain gear types, or closed to fishing entirely, to protect sensitive habitats. Map: North Pacific Fishery Management Council.

Has this decision-making process resulted in protections for sensitive habitats in the past?

The North Pacific Fishery Management Council is widely recognized as a leader in promoting sustainable fisheries, and it has a history of protecting sensitive habitats. In 2006 the Council created a series of six marine protected areas around the magnificent coral gardens in the Aleutian Islands. In 2008, the Council created the Northern Bering Sea Research Area, which excludes bottom trawling from an area the size of Arizona. And in 2009, the Council closed all U.S. waters above the Arctic Circle to commercial fishing. As summer sea ice in the Arctic retreats, the shipping and energy industries are quickly exploiting new frontiers. But no U.S. commercial fishing vessels will steam north of the Bering Strait until we have the scientific information we need to fish there sustainably.

These are just a few examples of the habitat protection measures the Council has adopted in recent years. All of them were based on sound science and on the same deliberative process now underway regarding sensitive habitats in and around Pribilof Canyon.

The Council process, and the science that supports it, is what makes the United States a global leader in sustainable fisheries management. Like all open, deliberative processes, this one takes some time. But industrial fishing has been going on in these areas for more than 50 years, and there is no state of emergency. If coral habitats in the Bering Sea are worth protecting, then it’s worth taking the time, and doing the necessary research, to get those protections right.