Tribes and local governments play an important role in collecting marine mammal data and responding to entangled and stranded marine animals throughout remote areas of Alaska. 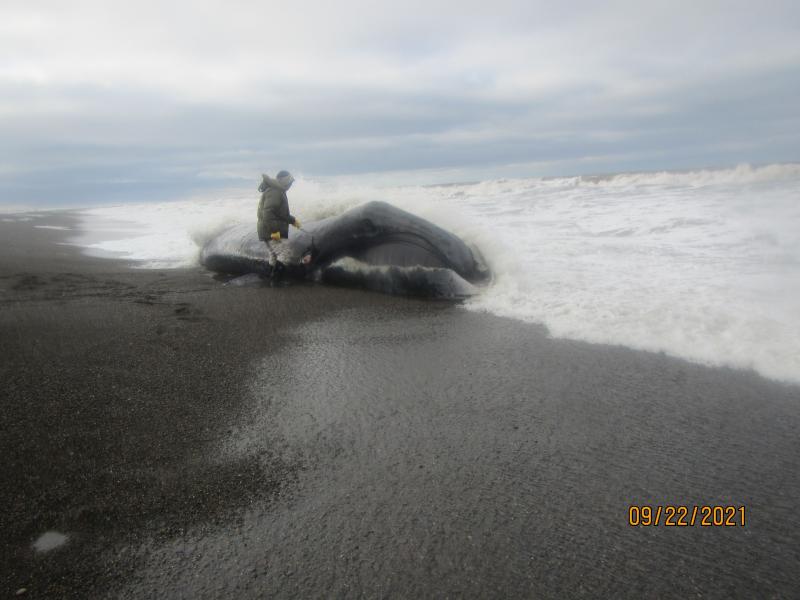 Perry Ashagnuak (Utqiagvik) collecting an eye from a stranded bowhead whale that had been killed by killer whale predation. Photo credit: Raphaela Stimmelmayr

November is Native American Heritage Month and the NOAA Fisheries Alaska Region celebrates Alaska’s indigenous people. Much of Alaska is remote, with nearly 34,000 miles of coastline stretching along the shores of the Beaufort Sea, Chukchi Sea, Bering Sea, and the Gulf of Alaska. Coastal communities often live a subsistence lifestyle with many Alaska Natives relying on marine resources including fish and marine mammals as essential nutritional and cultural resources. Several Alaska Tribes and local governments are part of the Alaska Marine Mammal Stranding Network. They collect data and reports from community and tribal members on stranded, distressed, or entangled marine mammals.

“Subsistence has special meaning for Alaska Natives and refers to a way of living that emphasizes the importance of respecting the land and its resources, as well as acknowledging a connection to the natural world.”   — Sun’aq Tribe of Kodiak

The Sun’aq Tribe of Kodiak is one of the 10 federally recognized Alutiiq tribes of the Kodiak Archipelago. Alutiiq people have lived along the shores of the Alaska Peninsula, Kenai Peninsula, and Kodiak Archipelago for at least the past 8,000 years. As part of their cultural tradition, the Sun’aq Tribe of Kodiak uses seal and sea lion pelts for handicrafts.

The Tribe has been part of the network since 2018, responding to stranded marine mammals and participates in carcass surveys. The Tribe is an important contributor to the investigation of the ongoing gray whale Unusual Mortality Event that began in 2019. As part of scheduled surveys aboard U.S. Coast Guard helicopters, Tribe biologists and NOAA Office of Law Enforcement officers monitor the coast of Kodiak Island and some of the smaller islands including Tugidak and Sitkinak Islands. The Tribe received the John H. Prescott Marine Mammal Marine Mammal Rescue Assistance Grant Awards in 2019 and 2020.

The Aleut Community of St. Paul Island is a tribal government on the Pribilof Islands, located 300 miles from mainland Alaska in the Bering Sea. The Pribilof Islands support colonies of laaqudan (northern fur seals) and qawan (Steller sea lion), both important subsistence resources. Since 1998, the Aleut Community of St. Paul Island has been a member of the Network. They collect data and samples from stranded marine mammals as well as documenting entanglements of pinnipeds in fishing gear and marine debris. In addition to documenting pinniped entanglements, the Aleut Ecosystem Conservation Office and NOAA collaborators have successfully captured and disentangled numerous juvenile northern fur seals, removing the gear and assessing injuries.  The Community received three  John H. Prescott Marine Mammal Marine Mammal Rescue Assistance Grant Awards in 2002, 2004, and 2006.

On the Arctic coast of Alaska, the North Slope Borough has been a Network member since 2009. The majority of North Slope’s people are Iñupiat, residing in eight villages with Utqiagvik (formerly Barrow) being the largest. Iñupiat, meaning “the real people,” have lived in the Arctic for thousands of years. Marine mammals—in particular bowhead whales—have a central role to their culture and traditional way of life.

The Borough supports the collection of stranding data through outreach with community members and subsistence hunters. It conducts dedicated beach surveys for marine mammal carcasses. During these dedicated beach surveys, members collect data and samples, and may tag carcasses to ensure they are not counted again. The Borough received three John H. Prescott Marine Mammal Marine Mammal Rescue Assistance Grant Awards in 2009, 2013, and 2021.

Much of Alaska is remote with sparsely populated coastal regions. As Network members, the Sun’aq Tribe of Kodiak, the Aleut Community of St Paul, and the North Slope Borough have ensured more complete coverage and understanding of stranded and entangled marine mammals in Alaska. Other coastal community members and Alaska Native organizations play a key role in reporting and responding to stranded marine mammals.