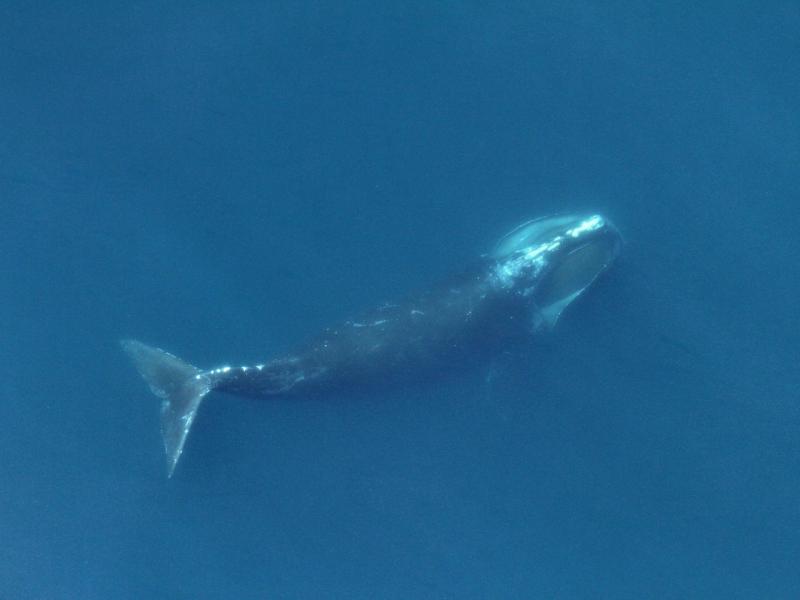 Researchers have found that right whale calls, much like human voices, change as individuals age.

In a study published in Animal Behaviour, scientists examined 986 high-quality calls from 49 individual North Atlantic right whales of known ages spanning from 1 month to 37 years.   Much like those of human infants and other mammals, calls made by whales younger than 1 year were shorter and less structured than adult sounds. As the animals matured their calls became more clear, with better defined structure and longer call durations.

“Acoustic maturation does not stop when a female right whale reaches sexual maturity at about age 9 and for males around 15,” said Sofie Van Parijs, leader of the passive acoustic program at NOAA’s Northeast Fisheries Science Center (NEFSC) laboratory in Woods Hole, Mass. and a co-author of the study. “The calls continue to develop as the animal ages, decades after it is physically mature. The frequency and duration of these calls may be able to tell us about body weight and size, and physical condition, including stamina.”

Calls were analyzed for five age groups. Sub-adults were divided into two groups: calves less than one year old and juveniles 1-8 years old. Adults were split into three groups: ages 9-14, 15-25, and 25 and older. Right whales are thought to have a life span of 65 or more years.

Previous studies have shown they have complex, information-rich calls and a large repertoire, including quick gunshot and constant frequency tonal calls, high to low sweeping “down-calls,” and low to high-sweeping “upcalls.” Upcalls are used by all ages of right whales as contact calls between individuals.

Lead author Holly Root-Gutteridge was a postdoctoral researcher at the time of the study with Susan Parks, an associate professor in the Syracuse University Biology Department. Root-Gutteridge noted that right whales have control over their voices as they age and may be sending more complex information that we previously thought. Parks, also a co-author of the study, and NEFSC’s Van Parijs have collaborated on several projects to improve understanding of the acoustic behavior of right whales.

Control over voices as they mature

Call rates have been shown to vary with behavior. Higher rates occur during surface activity and travelling than occur during foraging and "logging" behavior. Logging is when whales spend prolonged periods at the surface without engaging in much physical activity, resembling floating logs. Right whales also display flexibility in sound production, responding to changes in background noise by modifying their frequency and call amplitude in noisy environments.

In this study, the most noticeable changes observed in whale calls occurred between the first and second years of life. When younger than age 1, the calves made highly distinctive and chaotic calls comparable to babbling in human infants. By their second year, the calls were still short and chaotic but more closely resembled adult calls. Between ages 2 and 8, the juvenile calls developed with less chaos and increased control over the sounds, possibly showing a need to distinguish between individual animals.

Data used in the study were collected during 1999 to 2016 in the Bay of Fundy, Cape Cod Bay, and off the southeastern U.S. coast. Of the 986 calls from 49 individuals, 515 calls were collected using digital archiving acoustic recording tags (DTAGs) briefly attached to an individual whale. Researchers first attached the tag to a carbon fiber pole that they then used from a small vessel to reach the whale. The work was conducted under federal research permits and after observation of the animal’s behavior, with photo identification to determine the identity of the whale.

The remaining 471 calls were recorded using underwater microphones deployed from small boats. One individual whale was recorded by both a hydrophone and a DTAG. Most of the recordings were made in the Bay of Fundy or in Cape Cod Bay, when the animals were feeding or were engaged in social interaction. The rest were made when whales were calving or nursing in coastal waters off the southern U.S. coast.

“This is the first evidence for similarities in acoustic changes between humans and a long-lived whale species,” said Van Parijs. “It is exciting, but we have a lot more work to do to understand how possible physical changes, social learning, and environmental influences impact right whale communication.”

In addition to NOAA’s Northeast Fisheries Science Center, participants in the study are affiliated with Syracuse University, Cornell University, and the Duke University Marine Lab.