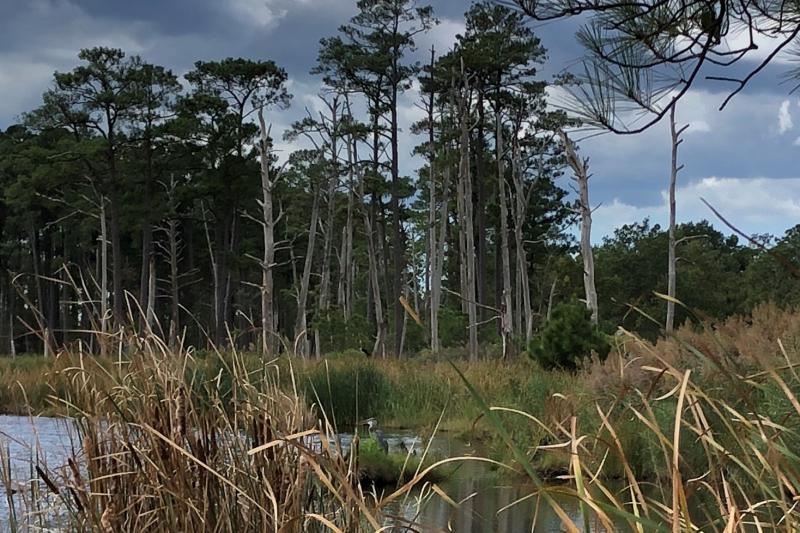 As salt water intrudes into marshy areas, some trees are unable to survive. Photo by Alison Hammer.

The Chesapeake Bay is home to more than 3,600 species of plants and animals. That includes 348 species of finfish, 173 species of shellfish, and more than 16 species of underwater grasses. It’s a vibrant ecosystem that has supported healthy fisheries for a long time. It has provided people with lots of great seafood, and supported many people who make a living in the seafood industry.

But climate change is affecting Chesapeake Bay habitats and, in turn, the species that rely on them. As habitats change, some species find challenges, while others may see opportunities.

Changes in the Bay

We are already seeing some changes in the Chesapeake Bay.

Sea level rise brings salt water to marshes that aren’t used to higher salinity. Plant and tree species that can’t migrate to less salty, newly inundated areas die. Grasses and other herbaceous plants stand a better chance of migrating, unless they run into a barrier like a road or housing development.

Submerged underwater grasses like eelgrass, which juvenile crabs need as habitat, are also affected by warming waters. The range of where those grasses can live is shifting. Rising water temperatures cause fish and other species including shrimp to shift north to find cooler water.

Increased temperatures, changes in precipitation patterns, and rising sea levels can cause hypoxia, or areas of very low or no oxygen. Hypoxia pushes fish away in search of more oxygen and kills immobile shellfish.

Intense rainfall events, which are more frequent due to climate change, can lower salinity in affected areas. Different fish prefer different salinity levels, and low-salinity areas can encourage the spread of fish that prefer fresher waters, like invasive blue catfish.

The water column reaches from just below the surface of the Chesapeake to the bottom of the Bay. Climate change is affecting these waters, from rising temperatures to changing salinity patterns. Because fish use this water as habitat, they are directly affected by climate change.

Striped bass are an important species in the Chesapeake Bay. They are a key commercial species and are beloved by anglers. But they face a “habitat squeeze” that limits the waters they can occupy due to a combination of rising water temperatures and low oxygen areas. In summer, the water near the surface now often exceeds 85°F. Hypoxic “dead zone” waters near the Bay bottom limit how deep fish can go to seek cooler water. Conditions have changed so dramatically that the Maryland Department of Natural Resources has recently instituted a two-week closure on fishing for striped bass in July (when water quality and temperatures are most stressful) to limit mortality.

While the iconic Chesapeake Bay dinner table features crab and rockfish, local shrimp could soon be on the menu, too. That’s because shrimp species are shifting north. Until recently, waters off the mouth of the Bay and in the southernmost part of the Chesapeake were not warm enough to host large numbers of shrimp. But in the last decade, warmer ocean temperatures have pushed shrimp farther north in numbers big enough to host a commercial fishery off Virginia. In addition to areas off Virginia Beach, Virginia is experimenting with a shrimp fishery off the coast of the Eastern Shore. Other fish are also shifting their distribution northward, including cobia and red drum.

Too Wet or Dry, Too Hot or Cold?

Some species are able to tolerate or adapt to habitat changes over time. However, most species have a much harder time dealing with more sudden changes to their habitat. But one aspect of climate change we expect to see in the mid-Atlantic is more intense weather experiences. That means more downpours rather than gentle rains, so fresh water runs quickly into creeks, rivers, and on into the Bay rather than sinking into the soil. It also can mean more extreme temperatures, both hot and cold. All of these extremes can affect plants and wildlife, which have evolved to live in more moderate conditions.

In 2018, the Chesapeake Bay watershed experienced record amounts of rainfall. This led to salinity levels well below average in the waters of the Chesapeake Bay and many of its tributaries. While oysters can tolerate some fresh water, they need saltier waters to be able to grow and reproduce. The timing of the rainfall was especially troubling. Much of the rain came in spring and summer, and those rains often came in intense, short bursts—giving oysters very little time to adjust. Those are the seasons when oysters spawn and their larvae drift in the waters as they try to find a hard surface on which to settle. Because of the low salinity, oyster reproduction was very low that year. That causes challenges for watermen who harvest them, aquaculturists who grow them, and restoration experts working to bring back the oyster population in large-scale projects around the Bay. More areas with fresher water may also have made it easier for invasive blue catfish, which prefer lower salinity water, to move around the Bay. That lets these voracious predators have access to more areas where they eat native species.

While areas of warming are an attribute of climate change, we also expect intense cold snaps in some locations. The Chesapeake Bay area experienced several very cold winters in the past decade. To shelter themselves from cold water temperatures, as winter arrives, blue crabs retreat to deeper waters and burrow into muddy or sandy bottoms. But when extreme cold affects the Bay, not even these areas are safe for crabs. Every year, scientists track the “overwintering mortality rate” of blue crabs in the Chesapeake to monitor how the winter’s weather may have affected the crab population. While usually about 4.5 percent of crabs die over the winter, in the winter of 2017–18, 6.37 percent died. In the warmer winter of 2019–20, only 0.36 percent of the crabs suffered from overwinter mortality.

We are funding research to help us learn more about how climate change affects species in the Bay. For example, researchers are exploring how summer flounder may be affected by rainfall and hypoxia. Scientists are also looking into how forage species may be challenged by climate change. Species we often look to as important commercial and recreational fisheries rely on other species as forage. That means that if climate change reduces the available forage base, those larger fish will have less to eat.