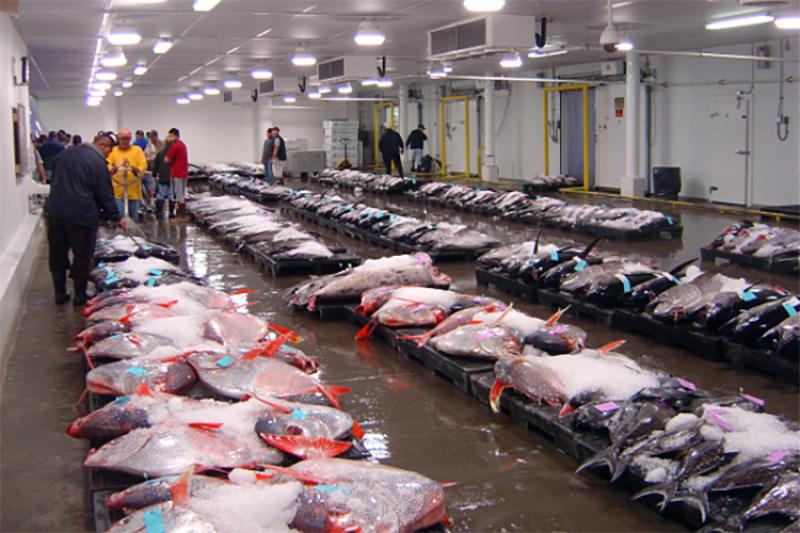 As commercial fishermen sold their catch at the busy United Fishing Agency (UFA) auction house in Honolulu, Hawaii, fish buyer Garrett Kitazaki noticed something curious about the opah changing hands: some had much bigger eyes, and their spots and color looked different.

Karen Underkoffler and Megan Luers, then contractors for NOAA Fisheries, followed up by measuring and taking tissue samples from the circular fish that are becoming an increasingly popular dish in restaurants. They sent the samples to John Hyde of NOAA Fisheries’ Southwest Fisheries Science Center (SWFSC) in La Jolla, Calif., who took the next step of examining their DNA.

Kitazaki was on to something. Opah DNA varied to the extent that the researchers identified three new species of the deep-diving fish, and resurrected one that had been previously described, in addition to the two currently named species for a total of six different species of opah that roam the world’s oceans. Each species is distinguished by different characteristics such as eye size, fin length, and other measurements, Underkoffler, Hyde, and their colleagues reported in a A taxonomic review of Lampris guttatus with descriptions of three new species in the journal Zootaxa.

“Once we started looking closely, we noticed more and more differences,” said Underkoffler, lead author of the new paper and now a consumer safety officer in NOAA’s Seafood Inspection Program. “Who knew we were going to dig up so many species when we started? We sure didn’t.”

The scientists examined fish coming through the UFA auction, focusing on eight key measurements that they could make quickly and accurately. They also inspected museum specimens and scanned the scientific literature dating to the 1700s to better understand the physical variations between and among opah.

“One of our biggest challenges was that opah specimens are very rare in museum collections, making comparisons to earlier descriptions almost impossible,” said Matthew Craig, a SWFSC research scientist and coauthor of the study.

Opah can cover such long distances that they had been widely assumed to be one worldwide species, he said. The discovery of several species came as a surprise, and may suggest that the fish have developed more specialized niches in different parts of the world.

In the last few years, opah has gained popularity among seafood consumers. Fishermen do not typically target opah directly, but rather catch them inadvertently as bycatch in tuna and swordfish fisheries. Fisheries managers need to understand the population structure of species and their geographical distribution so that each species receives sufficient protection and none become overfished.

“If you want to be sustainable, you need to know what you’re managing so you can understand what the impacts are,” said Hyde, the SWFSC’s program leader for fisheries genetics.

Opah made the news recently when other scientists at SWFSC demonstrated that they are the first fully warm-blooded fish, circulating heated blood throughout their bodies much like mammals and birds, and gaining a competitive advantage in the cold ocean depths. The new research paper catalogs the different species and their distinguishing characteristics, and includes a key to help others determine which species they’re looking at.

For instance, Lampris megalopsis is characterized by the largest eye of all the species, while Lampris incognitus has a smaller eye and others are distinguished by proportional measurements, colors, spots, and other features. Lampris australensis is the scientific name given the southern spotted opah, known from the southern hemisphere.

“They do visually look different if you know what to look for,” said Hyde. “Suddenly when you realize there are six species instead of two, it tells us there’s a lot to still discover out there.” 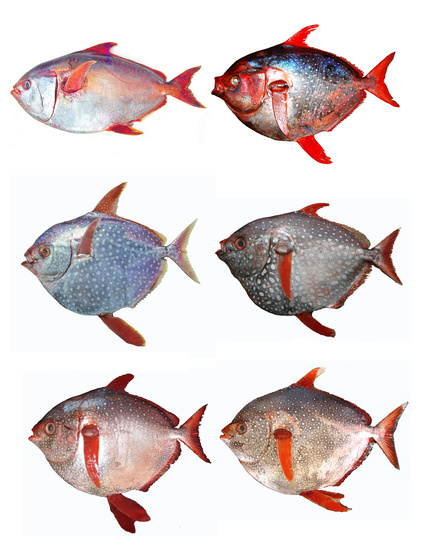