Stranded Kemp’s ridleys and loggerheads are heading south for rehabilitation. 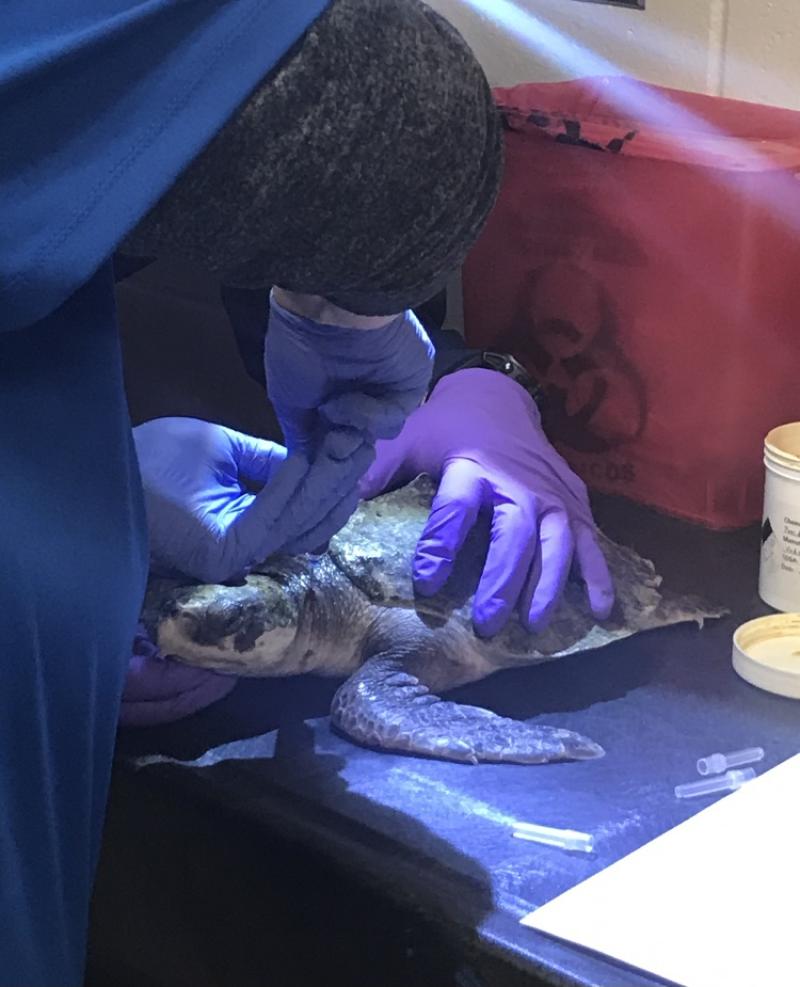 The turtles became stranded as a result of a cold stun event. When water temperatures drop below 50 °F, the turtles experience hypothermia causing them to become lethargic and stop swimming. Cold stunning occurs when sea turtles fail to migrate to warmer water for reasons that are poorly understood. Cape Cod Bay, Massachusetts is a common area where this occurs.

By the time the turtles washed up on shore, they had been in cold water for weeks. When they stranded, the turtles had reduced heart and respiration rates and other medical issues related to their organ systems slowing down. Cold stunned turtles also often come down with secondary infections, such as pneumonia. These turtles were first treated at the New England Aquarium and the National Marine Life Center. There, the turtles were warmed slowly, provided fluids, and started on antibiotics.

Yesterday the turtles were flown to airports in Atlanta, Georgia, Gulfport, Mississippi and Panama City, Florida, thanks to an organization called Turtles Fly Too. Their mission is to coordinate and facilitate the inclusion of general aviation in large scale “first responder” relocation efforts. The organization works with pilots who donate their expertise, aircraft, fuel, and labor while leaving a lasting mark on endangered species rescue efforts. Each flight averages between $10,000-$30,000. Thanks to the pilot Chuck Yanke and co-pilot Julie Tromblay for making these important flights.

Upon arrival at the various locations, the turtles were met by NOAA’s Sea Turtle Stranding and Salvage network partners, the Institute of Marine Mammal Studies, the Mississippi Aquarium, the Georgia Aquarium, Gulf World Marine Park, Gulfarium Marine Adventure Park. They will need medical care for weeks or months until they are healthy enough to be released back into the wild.

Last week more than 100 cold stunned turtles were flown to Texas by Turtles Fly Too to be treated for similar conditions.

If you see an injured or dead sea turtle please call your local stranding network coordinator to report the animal.

NOAA Fisheries and the U.S. Fish and Wildlife Service share responsibility for helping these endangered turtles recover. Kemp’s ridleys have been listed as endangered since 1970, and the population experienced a rapid and significant decline between the late 1940s and the mid-1980s. This dramatic decline resulted from intensive egg collection, killing of nesting females, and bycatch and drowning in the shrimp fleets of the U.S. and Mexico. Due to intensive conservation actions, Kemp's ridleys began to slowly rebound during the 1990s. However, an overall decline in nests was observed from 2009 through 2017, when total documented nests reached near 25,000.

At this time, it is unclear if future nesting will steadily and continuously increase, similar to what occurred from 1990-2009. It’s also possible that nesting will continue to exhibit ups and downs as recorded in the past 5 years. The most recent 5-year status review conducted by NOAA Fisheries and the U.S. Fish and Wildlife Service concluded that Kemp’s ridley remain in danger of extinction.