Copepods: Cows of the Sea

If you look very closely at a glassful of water from a bay or the ocean, you would probably be surprised by the life inside. 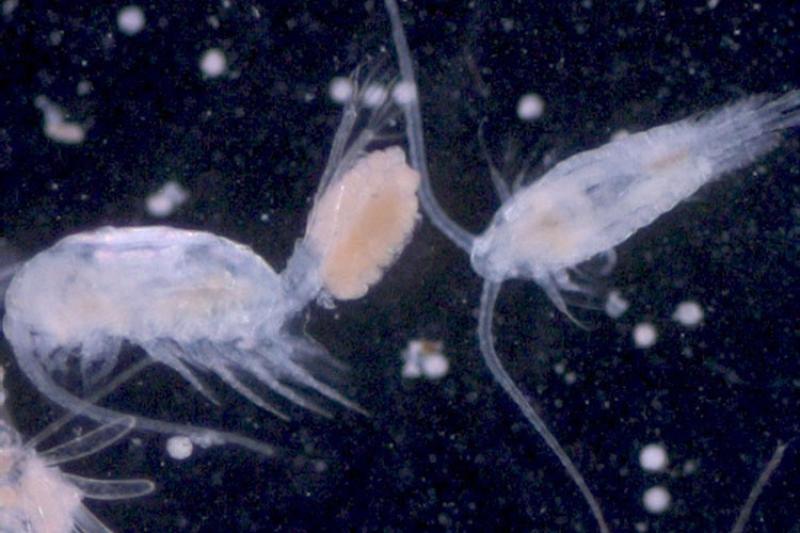 If you look very closely at a glassful of water from a bay or the ocean, you would probably be surprised by the life inside. You might see miniature crustaceans the size of the period at the end of this sentence or baby crabs and fish that spend only a short span of their lives this small. These creatures are zooplankton, aquatic animals that drift with the currents.

These tiny animals form the basis of the food web of estuaries, coastal waters, and oceans. Zooplankton feed on microscopic plant-like organisms called phytoplankton, which get their energy from the sun. Tiny crustacean zooplankton called “copepods” are like cows of the sea, eating the phytoplankton and converting the sun’s energy into food for higher trophic levels in the food web. Copepods are some of the most abundant animals on the planet. 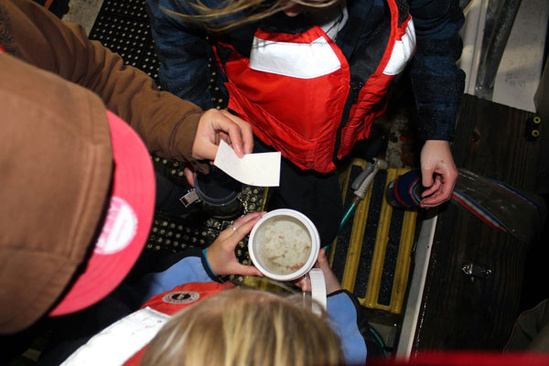 Fish such as anchovies cruise through the water with their mouths wide open, filtering copepods and other zooplankton from the water. Anchovies and other planktivores (plankton-eaters) are prey for bigger animals, like tuna, sharks, marine mammals, and seabirds.

But sometimes there’s no middle level. One of the largest and rarest animals alive, the right whale, filter-feeds on copepods. As you might imagine, right whales have to eat a lot of zooplankton. It helps, then, that sometimes zooplankton are found in vast numbers called “blooms.”

When conditions are right, copepods and other zooplankton can bloom in such numbers that the water becomes cloudy. Off our coasts here in New England and the Mid Atlantic, this often happens in the spring. When water temperatures rise and sunlight increases, the phytoplankton increase, and then the copepods that eat them grow in number, too. These great blooms of phytoplankton feed the zooplankton, which are what make our waters able to support large commercial and recreational fisheries, as well as populations of whales, dolphins, seals, and sea birds.

More than Meets the Eye

In addition to the tiny animals that spend their lives floating in the water, there are many other aquatic animals, such as crabs, shrimp, sea stars, snails, clams, and fish, that spend the first stages of life as plankton. At these early stages, they feed on zooplankton. This nomadic, floating existence also allows them to colonize new habitats. These groups have adaptations specifically for life as plankton. For example, many have clear bodies and spines to make them difficult for predators to see, and oil droplets that allow them to float.

Here at NOAA, we are charged with stewardship of our nation’s fisheries. Since plankton stocks support our estuarine and marine food webs, we look out for the welfare of these tiny creatures. Anything that affects plankton can ultimately affect our fishery resources. Because our coastal habitats support plankton and food webs, it’s very important to conserve and protect those habitats.

As a habitat conservation biologist, I work to conserve salt marshes, estuaries, and other coastal habitats to maintain a healthy ecosystem – one that will support the plankton that, in turn, supports a healthy food web. Maintaining healthy “cows” of the sea is one of the important ways we support our recreational and commercial fisheries.