The Cost of Saving Sea Turtles from Gillnets

In small-scale fisheries around the world, gillnets are helping individual fishermen put food on the table day in and day out. But at the same time, this non-selective fishing gear is inadvertently catching bycatch. 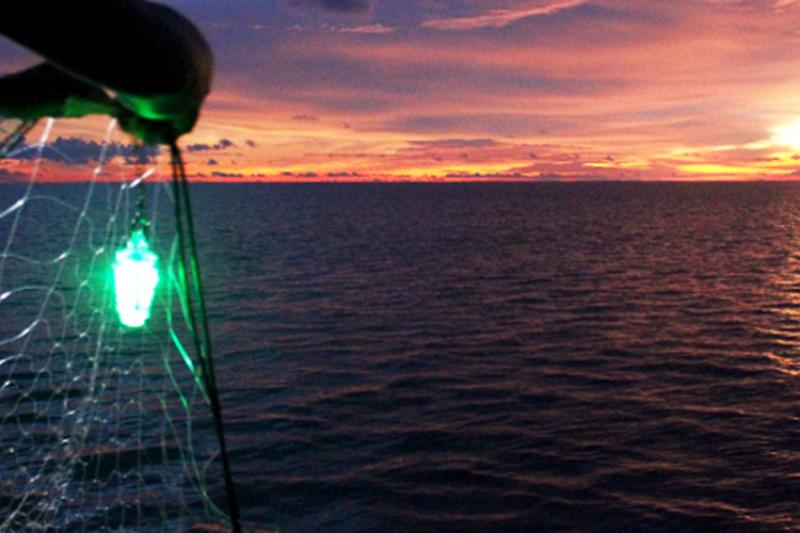 In small-scale fisheries around the world, gillnets are helping individual fishermen put food on the table day in and day out. But at the same time, this non-selective fishing gear is inadvertently catching — and at times killing — large numbers of unintended and unwanted animals, known as "bycatch."

For nearly a decade, scientists with the NOAA Pacific Islands Fisheries Science Center (PIFSC) and their colleagues at other institutions have been working to develop mitigation measures, particularly using lightsticks to illuminate gillnets, to prevent sea turtle bycatch. Now, in the first test of the technology in a real-world fishery setting, the researchers have shown that green LED lightsticks attached to gillnets can reduce sea turtle bycatch in Sechura Bay in northern Peru by about 64 percent — without affecting the catch of desired fish.

What's more, the research, published recently in the journal Marine Ecology Progress Series , estimates that it would cost as little as $34 over a three-year period to reduce sea turtle bycatch by one turtle.

"This is a global form of fishing and the bycatch of turtles is a global problem," says study co-author John Wang, a PIFSC research ecologist. "This study shows that this is a useful tool for gillnet fisheries to reduce their interaction with sea turtles. And it can be done in a way that does not negatively influence the target catch for the fishermen."

In the United States and other industrialized nations, we rely heavily on high-seas, large-scale fisheries, such as purse seines and longlines, for our seafood.

But small-scale, "mom and pop" fisheries that utilize gillnets actually make up a huge percentage of the global fishing effort, Wang says, adding that "lots of times we focus on what these industrial boats are doing but we forget what the masses are doing and their potential impact on the environment."

That is to say, the easy-to-use gillnets have a well-known dark side: They frequently snag bycatch, including sea turtles, seabirds, and elasmobranchs (sharks and rays).

This bycatch is a major issue for the animals' survival, especially considering that the six species of sea turtles that occur in U.S. waters — including the green, loggerhead, and leatherback (a NOAA Fisheries' Species in the Spotlight) sea turtles — are listed as either threatened or endangered under the Endangered Species Act.

To help turn the tide for these threatened reptiles, Wang and others have long sought to develop inexpensive, effective bycatch mitigation tools. But first, they had to better understand how the sensory physiology of sea turtles compares with various commercial fish.

Sea turtles, the research showed, see well into both the ultraviolet and red ends of the spectrum, with their peak vision occurring around green light. "It's very different from how some fish see," Wang says, explaining that commercial fish often can only see within a much narrower band of the light spectrum.

But it's important to consider environmental context along with sensory physiology. For example, light can be used in longline fisheries to attract swordfish to baited hooks, but when these lights are placed on nets, they illuminate the barrier and help sea turtles avoid the fishing gear.

After understanding how light affects sea turtles and other animals, Wang and other PIFSC scientists wanted to see how lightsticks affect turtle catch rates in a controlled research setting. They teamed with the Ocean Discovery Institute (ODI) — a nonprofit organization based in San Diego, California that seeks to transform underserved youths into science and conservation leaders — to conduct studies at ODI's research platform in Baja California, Mexico.

As in gillnet fisheries, turtles are caught at the platform frequently — but for population studies rather than as bycatch. The lightstick research, conducted by ODI students from California's City Heights community, showed that the tools do indeed reduce sea turtle catch significantly.

The next step was to test the mitigation strategy in a real-world setting.

For the new research, which is the culmination of 8 years of work, Wang and his colleagues at the University of Hawai‘i, University of Exeter in the United Kingdom, and ProDelphinus and Universidad Cientifica del Sur in Peru, tested the effects of green LED lightsticks on the catch rates of sea turtles and target fish in a gillnet fishery in Sechura Bay.

Over a period of two years, the researchers put out 114 pairs of gillnets using typical fishing practices and as part of regular fishing trips. One-half of the paired nets were regular, unmodified gillnets stretching about 1970 feet (600 meters) across; the other half of the nets had green LED lights placed every 33 feet (10 meters) along the float line. 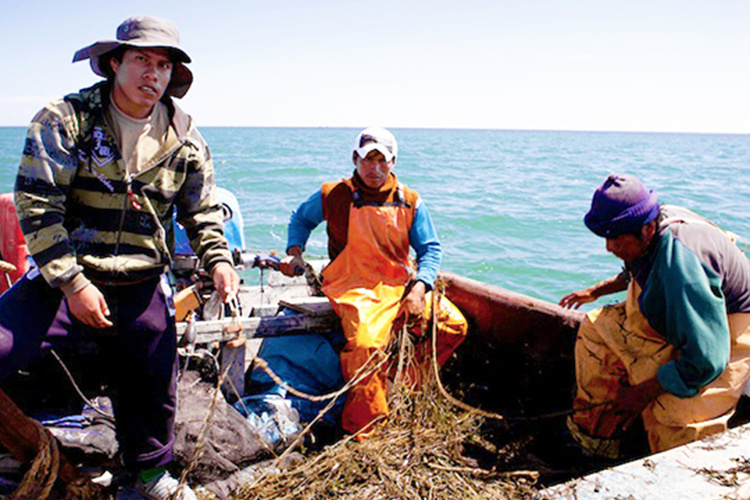 Two Peruvian fishermen with an on-board NOAA Fisheries observer (Sergio Pingo, on the left) fishing the Pacific waters near the town of Constante in Northern Peru.

The team then wanted to see, realistically, how much it would cost to save a single sea turtle in small-scale gillnet fisheries. "We're very cognizant of the fundamental issues with employing technologies in fisheries, and how these issues are exacerbated in small-scale fisheries," Wang says.

Their calculations took into consideration a number of factors, including the cost of LED lights, the number of lights needed for each boat in the Sechura Bay fishery, and potential reduction in sea turtle bycatch from the lights, among other things.

Over a three-year period, it would cost between $34 and $61 to save a single sea turtle from bycatch, with an annual cost per vessel of $1155 to $3003 to outfit their gillnets with the lightsticks, the researchers found. But Wang points out that this technology is still unaffordable for the Sechura Bay fishermen who'd be using it, and stresses the need for subsidies from national-level fisheries or international conservation organizations.

Importantly, though the research focused on green sea turtles, the lightsticks could be helpful for a range of species. For example, the team saw also saw a very strong reduction — almost 90 percent — in seabird bycatch from using the LED lights, Wang says. In the near future, the technology could also be further tuned, such as by altering the LED's color, to possibly increase the catch rates of certain target fish in certain fisheries.

"We've tested it in this one individual fishery, but we're cognizant that there's no silver bullet that will work for all fisheries," Wang says. "But this work creates a solid foundation as we move towards is a much broader-based bycatch reduction tool."