The Hawaii Community Tagging Program engaged in a collaborative effort to record an amazing encounter. 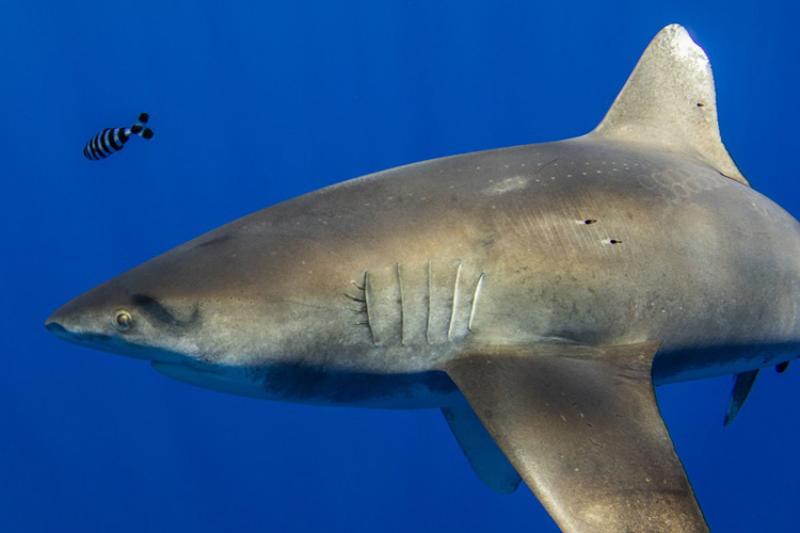 This oceanic whitetip shark is more than 6 feet long. The circular markings next to its dorsal fin were likely caused by a giant squid. Photo courtesy of Deron Verbeck, iamaquatic.com

Deron Verbeck is what you call a “waterman.” He spends more time underwater than most, interacting with some very interesting creatures doing some very interesting things. Deron is also one of the more prolific taggers in the Hawaiʻi Community Tagging Program. As a professional wildlife photographer, he has provided more than a decade’s worth of oceanic whitetip photos to the program. Those photos are helping us get to the bottom of one shark’s encounter with another underwater predator.

Oceanic whitetip sharks have unique markings on their very large fins, which lend credence to their Latin name, Carcharhinus longimanus. We can use these markings to identify individual animals. Our partners at Hawaiʻi Unchartered Research Corporation have identified more than 100 individuals, and found that some of them are repeat visitors to the islands. This citizen science program allows anyone with a camera who spends time around sharks to upload their photos to our database. It has really improved our understanding of this highly migratory species’ population demographics and residence times around Hawaiʻi.

In November 2019, Deron came back from a trip offshore of Kona, Hawaiʻi, with photos of an oceanic whitetip that were truly unique. “I noticed the uniform dots that went into a point under the dorsal fin of the shark at first and thought it was unusual, as I’d never seen it before. But the shark only presented itself on the left side twice, so when I got back home and started going through the photos, I was able to zoom in on the sucker marks. It was really lucky I was able to get a few photos of its left side.” The photo showed a 6-foot male oceanic whitetip, and evidence of its interaction with what was very likely a giant squid.

Dr. Yannis Papastamatiou is a shark biologist from Florida International University who has spent time tagging sharks with Deron around Kona. But when he saw these pictures he was astounded. “When we saw the size of the sucker scars along the body of this animal, we were amazed … we think these scars tell the tale that the shark may have won that battle.”

He had never observed these distinct sucker scars on any shark he has tagged throughout his career. This inspired him to investigate further. He recently published the results as a short communication in the Journal of Fish Biology. “Satellite tagging studies have shown that oceanic whitetips often make deep dives to meso-pelagic layers potentially to forage, and thus may encounter cephalopods at deep depths, especially while they associate with pilot whales that may help locate prey at these depths... sucker markings have also been seen on sperm whales,” says Yannis.

Yannis sought the expertise of a local cephalopod expert at Florida International University, Dr. Heather Bracken-Grissom, who was able to help identify the squid. “The bilayer of smaller dots could be from very small suckers on the narrowing section of the end of the tentacle. And suspected species are the giant squid (Architeuthis dux), or species from the genera Thysanoteuthis and Megalocranchia. All these species reach lengths greater than 2 m (and up to 18 m in Architeuthis), have tentacle morphologies consistent with scarring patterns, and are found (or likely found) in Hawaiian waters.”

“We are still learning so much about oceanic whitetip sharks,” said Dr. Melanie Hutchinson, the Hawaiʻi Community Tagging Program leader with the Joint Institute of Marine and Atmospheric Research, a NOAA Fisheries cooperative institute. “This study really proves the value of working with marine stakeholders from all different backgrounds. This is one of my favorite aspects of the tagging program; it facilitates conversations and information exchange. I think fisheries and conservation are meant to work like this. Everyone has a role, everyone has a voice, and we all work together using our unique skill sets to ensure healthy ecosystems for future generations.”

Oceanic whitetips are particularly hard to study because they are extremely elusive. Overfishing has caused their populations to decline, so we don’t often interact with them. They have wide ranging movements throughout deep oceanic habitats, and we don’t know which places and times are critical to population growth. This species is listed as “threatened” under the Endangered Species Act. The tagging program is working hard to understand what drives the shark’s movements in order to predict its habitat use. This information can help fishers avoid the sharks, reducing depredation rates and mortality—both are beneficial for fishers and sharks.

The Hawaiʻi Community Tagging Program is a collaborative citizen science initiative led by Dr. Melanie Hutchinson and her team since 2015. The program has support from

The program works to reduce the impact of fisher-shark interactions on shark populations, as well as economic losses to fishers when sharks steal their catch. The community effort involves training local fishers and ocean users to tag incidentally captured sharks. In doing so, the program incorporates the valuable ecological knowledge of local fishers with information about movement and habitat use from tagged sharks. The program can use these data to come up with strategies that may reduce shark depredation rates and mortality. This collaborative effort has led to many interesting discoveries over the years, but the discovery of a shark’s interaction with a giant squid may just take the cake!