Dall’s porpoise are not hard to find in Alaska waters. If you are in a boat, chances are they will find you.

Possibly the fastest of all dolphins and porpoises, Dall’s are notorious bow riders, darting back and forth in front of a moving ship, carving a rooster-tail spray as they surf the bow wave.

This affinity for ships and speed makes the compact black-and-white porpoise one of Alaska’s more visible marine mammals, but also one of the most difficult to study. Their behavior confounds traditional survey methods that depend on research subjects not racing eagerly toward the survey vessel. Although Dall’s porpoise are an abundant fish predator, they have been little studied in Prince William Sound since the 1980s – before the Exxon Valdez oil spill.

“Dall’s porpoise generally prefer open or deep water, where they can use speed to escape predators,” says study leader John Moran, fisheries biologist of the Alaska Fisheries Science Center. “But during our study in 2007-2015, we also found them in bays, shallow water, and nearshore habitats. These areas are not typical habitats for the species. Dall’s porpoise were not found in bays and shallow water during surveys in 1958-1980.”

Moran suspects that one reason Dall’s porpoise are venturing into new waters is the decline of the local ATI (transient) killer whales in the Sound since the Exxon Valdez oil spill.

For many marine mammals, open water is a risky environment, unless they can outswim their predators. But for speedy Dall’s porpoise, flight in open water may be the best strategy to escape from predators. A bay can be a trap.

“In a Southeast Alaska bay we saw killer whales hunting Dall’s porpoise by cooperatively blocking their escape route to open water,” Moran explains. “The porpoise appeared to panic, and the whales killed several of them.”

Before the Exxon Valdez oil spill, the genetically distinct population of killer whales known as AT1 were the main predators of Dall’s porpoise in Prince William Sound. These transient, or Bigg’s killer whales, specialize in hunting marine mammals, specifically harbor seals and porpoise—they are not fish predators. After the oil spill, the AT1 population plummeted by 41%, and has not recovered since. The pod lost its reproductive age females and has failed to produce young. The AT1 population is now thought to be heading toward extinction: scientists estimate that seven of the whales remain. 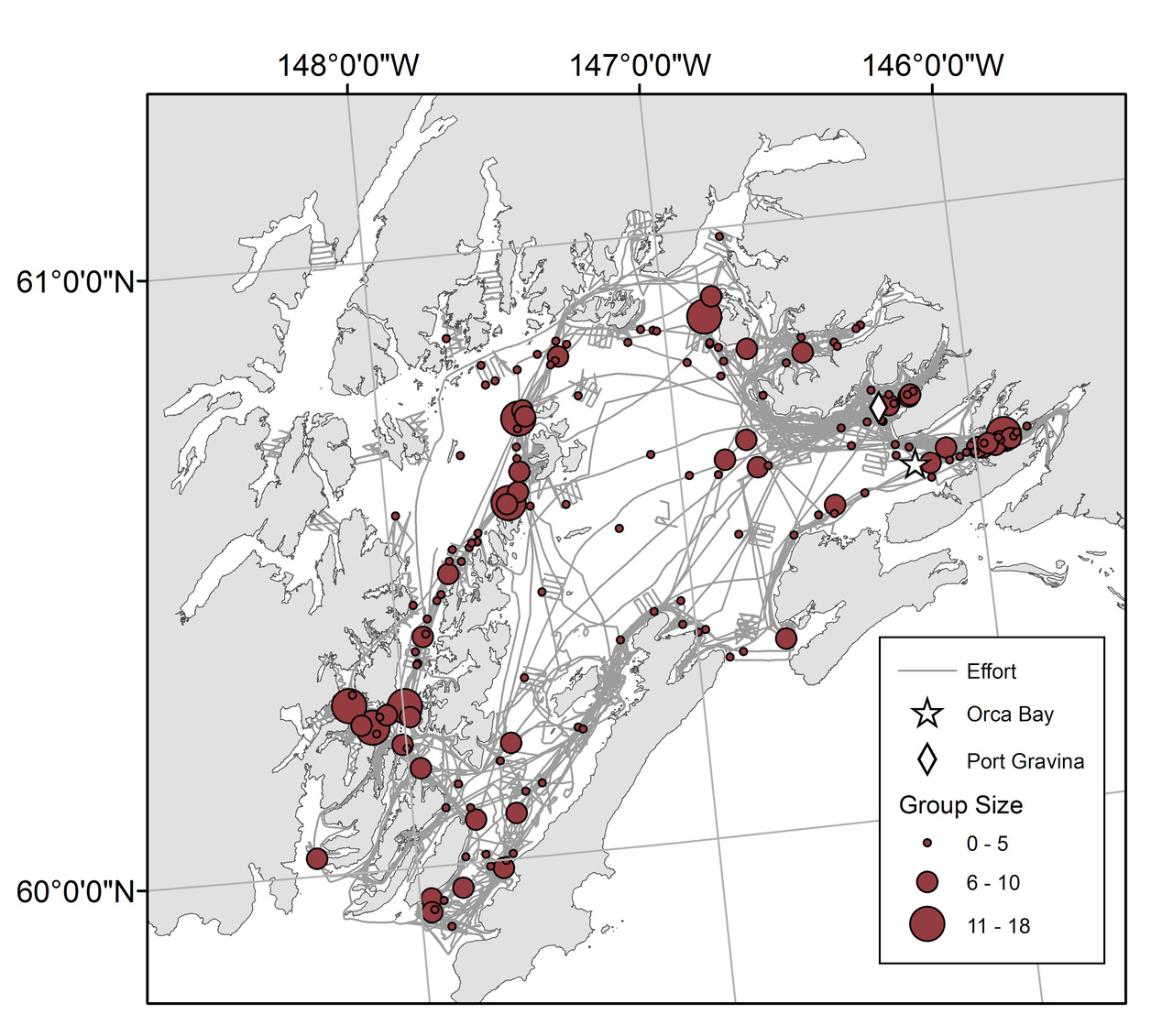 Effort and sightings of Dall’s porpoise during whale and forage fish surveys in all seasons from September 2007 - April 2015 in Prince William Sound, Alaska. Symbol sizes indicate the number of individuals in the observed groups.

The decline of the AT1 pod may have opened new foraging ground to Dall’s porpoise. During Moran’s study, forage fish (walleye pollock and herring) were concentrated in the areas Dall’s porpoise had moved into.

The current population size of Dall’s within Prince William Sound remains uncertain, but their high metabolic rate and ubiquitous presence make them one of the more important and likely underestimated forage fish predators, whose ecological niche may be expanding with the decline of the AT1 killer whale pod.

The new study provides the up-to-date information that resource managers need to mitigate potential conflicts with human activities like commercial fishing, noise, and oil spills: where Dall’s porpoises are, what habitats they use, and what their ecological role is in a changing Prince William Sound.