Young female monk seal, known as Nanea, was found dead on the North Shore of O'ahu. 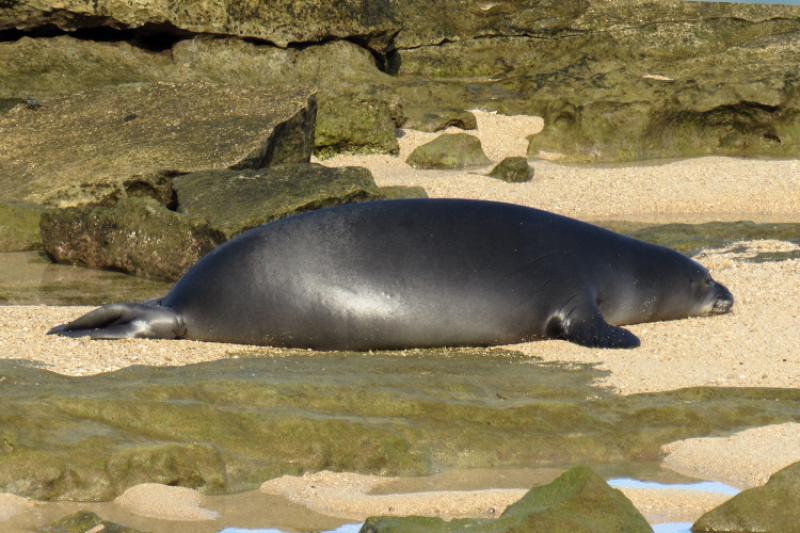 We are saddened to report that recently-weaned female Hawaiian monk seal pup RL44, also known as “Nanea,” was discovered dead on the North Shore of Oʻahu on the morning of September 24, 2019. The circumstances surrounding her death indicate that she did not die of natural causes. The case has been referred to NOAA's Office of Law Enforcement for investigation. Anyone with useful information should call (800) 853-1964.

RL44 was born at Paradise Cove, a popular recreational beach, on July 19, 2019. Hawaiʻi Marine Animal Response (HMAR) and NOAA Fisheries monitored her during her 6-week nursing period (a normal time frame for nursing monk seal pups). After she weaned, we decided to relocate her to a remote location on the North Shore. Our primary concern was that RL44 have the opportunity to interact with other monk seals, and not people, during an important time in her behavioral development. On the North Shore, she could grow up in the company of several other young, wild monk seals, with less likelihood of human disturbance and, more importantly, not becoming fixated on people.

Management decisions like translocating a seal are carefully weighed in a series of in-depth risk assessments. All decisions are ultimately made with seal and human safety as the primary concern. To reduce the threat of Nanea interacting with discarded fishing gear in her new location, the Hawaiʻi State Division of Aquatic Resources performed a sweep prior to translocation and removed line, nets, hooks, and other debris from the area.

On the day of her translocation everything went smoothly.  NOAA staff members evaluated her status at the time of the translocation and had no concerns about her behavior or physical health. In the 4 weeks following translocation, HMAR volunteers closely monitored RL44 and it appeared the goal to get her close to other seals was incredibly successful. She was seen frequently socializing and playing with other seals in the area.  Her smooth transition to her new home following the translocation and our hopes for her future were shattered by this tragic loss.

"... brought exactly what she seemed: peace for our water and our reefs for a period of time, so [they] had time to heal. Nanea brought peace to Milo Beach; that's why I named her that."

We will continue to provide updates as we receive information. We will continue engaging in dialogue about threats to monk seals and the challenges associated with managing and mitigating those threats.

Last updated by Pacific Islands Regional Office on May 06, 2020