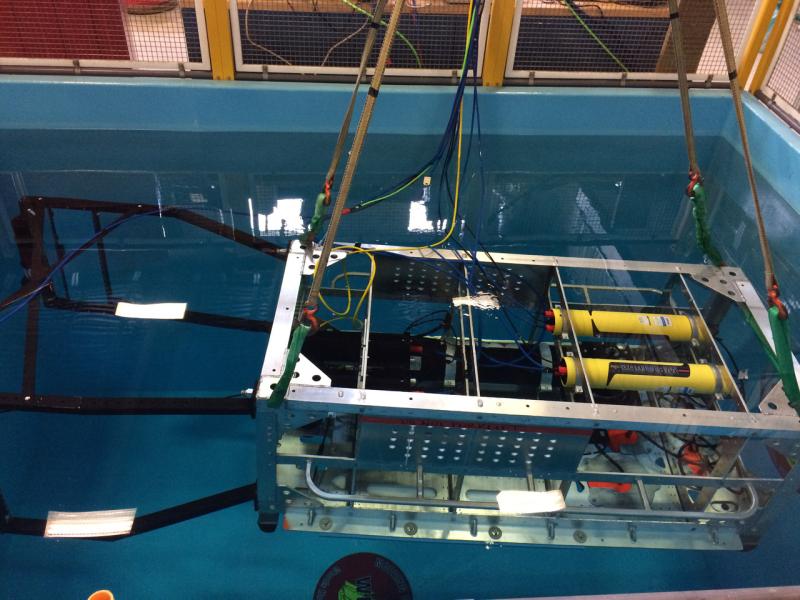 Developing and testing a new piece of equipment at sea is always a challenge, one Mike Jech is no stranger to tackling. A fisheries biologist and acoustics researcher at the Northeast Fisheries Science Center (NEFSC) laboratory in Woods Hole, Mass., Jech is using his skills and expertise on a joint project with the neighboring Woods Hole Oceanographic Institution (WHOI) and a new instrument platform called Deep-See. NEFSC is the project partner.

As a co-principal investigator on the project, Jech has spent the last three years helping to design the instrument, securing the long fiber optic cable needed to launch it into the ocean and send back high resolution real-time images and data, and find a ship able to test it.

His efforts paid off.  On August 11, the NOAA Ship Henry B. Bigelow will depart Newport, RI, for 10 days with 16 scientists including Jech and engineers aboard to take the new instrument to sea for the first time for testing, calibration and evaluation. Jech’s expertise will be used on the fisheries and acoustics aspects of the cruise since he has experience using the Bigelow’s trawl net and acoustics systems on previous cruises as a member of the Center’s Ecosystems Surveys Branch.

“Deep-See is an acoustic, optic, oceanographic, and biological sampling system that integrates wideband echosounders, stereo and holographic cameras, environmental and light sensors, and eDNA instruments towed at the depths of the meso and bathypelagic communities to get an in-depth view of the organisms living there,” said Jech. “There is no other instrument like it in existence.”

Weighing more than 2,000 pounds, the roughly 20-foot long towed platform carries a variety of instruments and sensors adapted for use on this platform. It will collect data at unprecedented rates and send real-time information back to the surface for researchers to see and monitor. Deep-See was funded by a National Science Foundation grant to Andone Lavery at WHOI, a long-time colleague with whom Jech has collaborated on other acoustics project.  Lavery will be the chief scientist on the Bigelow testing cruise, with Jech handling the trawling and fish aspects of the at-sea operations.

“Our goal is to explore an area of the open ocean just off the edge of the continental shelf  known as the Twilight Zone, where light from the surface stops penetrating, from about 200 to 1,000 meters depth (about 660 to 3,300 feet),” said Jech. “That is the mesopelagic zone, where the largest animal migration on earth happens every day. We don’t know a lot about it since most of the animals have been captured with nets in the past, so this project is about exploration in greater detail even though the location is not that far from shore. This first cruise will allow us to test the platform and see how all the sensors and instruments work together and how they adapt to pressure under water. Calibrating the instruments will be a big part of the work.” 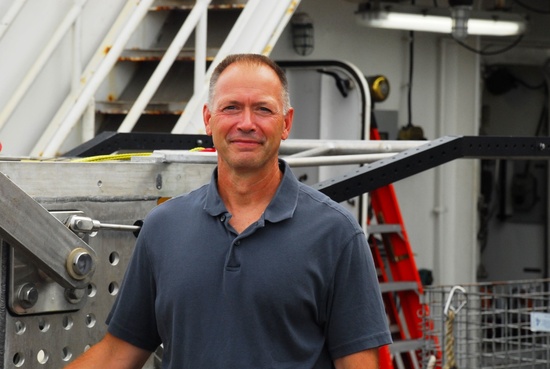 As an acoustics researcher who is also interested in prey fields for whales, Jech would like to use this opportunity for further collaboration with the Center’s Protected Species Branch.  He has conducted research using acoustics to visualize schools of fish like herring, menhaden, and tuna and their prey but began to look at using acoustics to quantify prey for beaked and other deep-diving whales off the continental shelf about five years ago.

“We know doing multi-frequency work that there are layers within layers in the ocean. We see different species in different parts of the layers,” Jech said. ”Some animals migrate, some don’t.  We’ve never been able to see them in great detail.  Hopefully we will with the optical stereo cameras and holographic imaging systems on Deep-See. We will be using acoustic signals ranging from 1 kHz to 500kHz to find individual animals within the layers, which is amazing. We are putting a lot of smart sensors down with these instrument packages, including an eDNA in situ sensor.“

Bigelow Only Vessel in NOAA Fleet with This Capability

To make it all happen, a very long 0.681 inch fiber optic cable with three copper conductors and three optical fibers to provide enough power and bandwidth to communicate with all the sensors and instruments on the platform, had to be located.  Nathan Keith, the NEFSC’s vessel coordinator, helped Jech locate the cable at the Southwest Fisheries Science Center in La Jolla, Calif. and with the help and support of NOAA's Office of Marine and Aviation Operations (OMAO) had it transported across the country to Newport, RI, for installation of the Bigelow in June. That meant unspooling all the old cable and installing 4,000 meters (roughly 13,000 feet) of the new fiber optic cable onto the Bigelow’s traction winch.

“Getting the cable here and onto the Bigelow presented a lot of challenges, both logistical and technical,” Jech said. “It took a lot of people willing to work together to make it happen. OMAO, NOAA Fisheries, the leadership of the NEFSC, and the ship’s officers and crew have been very supportive.”

The Bigelow is the first NOAA Fisheries research vessel to have this capability. The addition of fiber optic technology, along with the vessel’s other scientific and gear handling capabilities, greatly expands the utility of the Henry B. Bigelow for scientific monitoring and research.