Finding out how many marine mammals, sea turtles and seabirds are in U.S. waters, where they are located at different times of the year, and how they may be changing over time is the focus of this multi-year federal effort now in its tenth year. 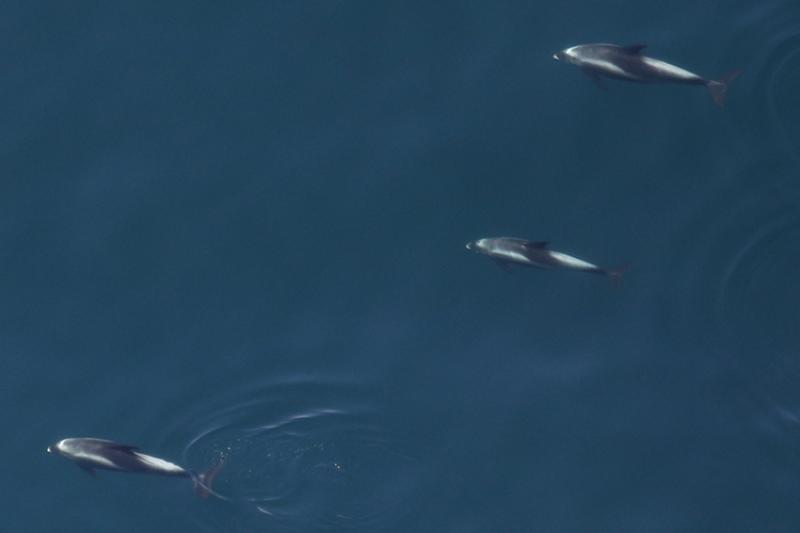 The Atlantic Marine Assessment Program for Protected Species, or AMAPPS, allows researchers to put all the information about abundance, distribution, ecology and behavior of protected species - from whales, dolphins, and seals to marine turtles and seabirds - into an ecosystem context so resource managers can use it for conservation measures and decision-making. 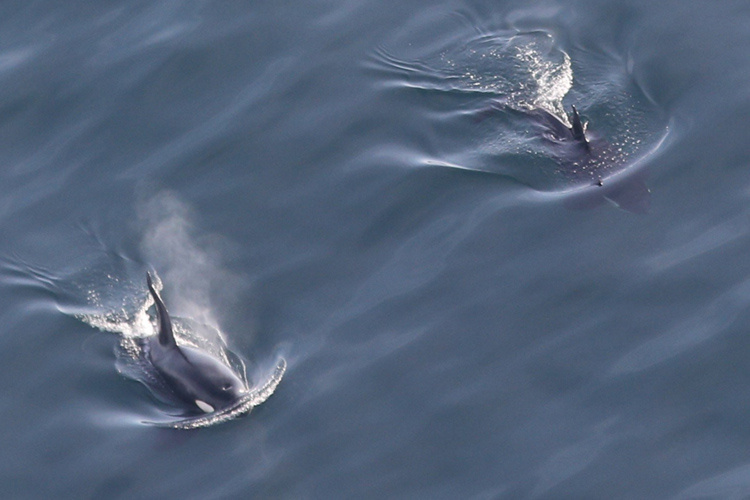 Killer whales, also known as orcas, are the largest member of the oceanic dolphin family and are a top marine predator. Photo: NOAA Fisheries

“Long-term year-round ecological data on protected species and their environment in the Atlantic are limited,” said Debra Palka, a research biologist at the NOAA Fisheries Northeast Fisheries Science Center who coordinates the program for the Northeast and Southeast Fisheries Science Centers. “The aerial and shipboard observations, oceanographic sampling, telemetry and passive acoustic monitoring supported by AMAPPS give us data that can be used to quantify changing distributions and assess the potential impact on protected species caused by human
activities.”

The primary funders of AMAPPS are NOAA, the Bureau of Ocean Energy Management (BOEM), U.S. Fish and Wildlife Service, and the U.S. Navy. One of the goals of the program is to develop models and related tools to provide distribution patterns and density estimates by season and location that includes habitat characteristics of marine mammals, turtles and seabirds along the U.S. East Coast.

The next five-year program, AMAPPS III, runs from 2019 to 2023. During AMAPPS III, in addition to continuing the above data collection, plankton (in particular larval tuna) samples will be investigated. 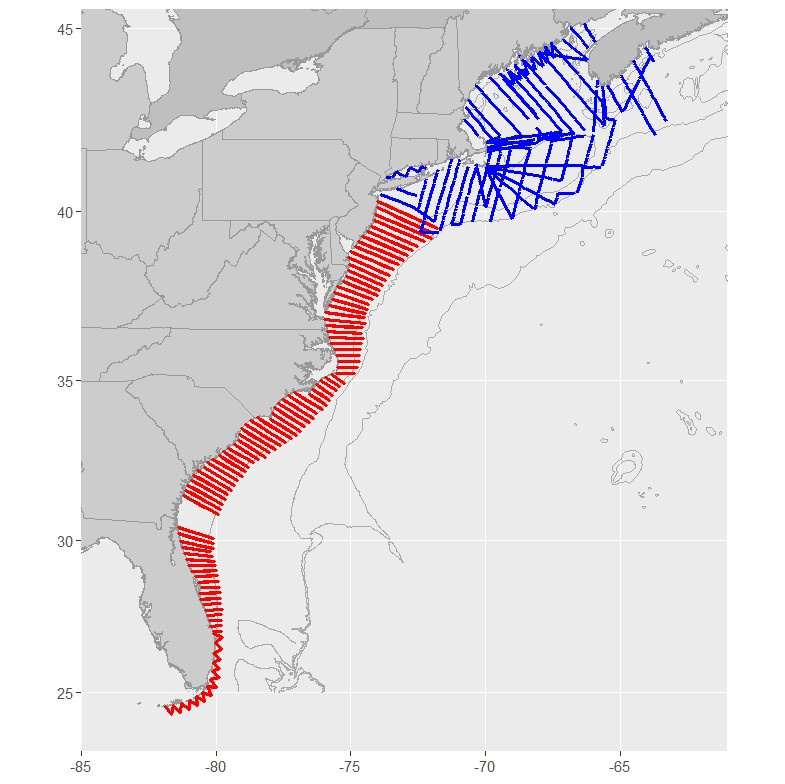 As part of AMAPPS activities in 2019, NOAA Fisheries scientists for the Northeast and Southeast Fisheries Science Centers conducted spring aerial surveys covering waters from Florida to Maine from the coastline to more than 200 miles offshore during April 1 to June 30 using NOAA Twin Otter aircraft.

The Northeast Fisheries Science Center also collects oceanographic and environmental data on its own shipboard survey cruises throughout the year, such as the Ecosystem Monitoring survey, which also hosts AMAPPS marine mammal and seabird observers. Data are  also collected on whale and other protected species through opportunistic surveys aboard vessels from other marine research organizations. Leatherback turtles were equipped with satellite and suction cup tags in May off North Carolina and in August off Massachusetts. Veterinarians examined the turtles in both locations to assess their health. Also during August, researchers went to the edge of the continental shelf to test and integrate multiple new technologies to assess the ecology and distribution of little known deep-diving cetacean species, like beaked whales and sperm whales. 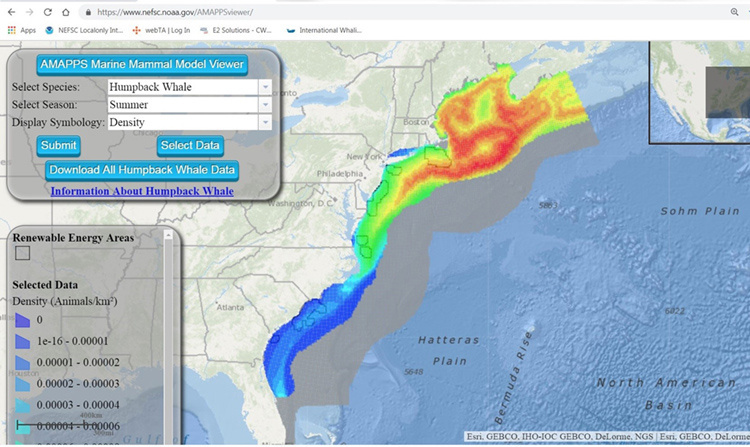 The Marine Mammal Model Viewer displays data on a variety of species in different seasons in the year. Data can be downloaded for a variety of analyses. Photo: NOAA Fisheries

One product of the program to date has been the Marine Mammal Model Viewer, which displays the data on a map of the East Coast showing the predicted abundance and distribution of a specific marine species in different seasons of the year, based on the data scientists collected during this project. Sightings of the 17 most common whale, dolphin and porpoise species are included, with more species to be added. Wind-energy lease areas are marked on the maps, which can be viewed on computers as well as on mobile devices. A user can draw a box around an area of interest, investigate in more detail the density patterns within that box, then download the density data for use in other analyses.

“We wanted to offer a product where the public could not only see our results but also download and use the data for their own analyses,” said Palka. “The viewer has a lot of fine-scale information. Most of the feedback we have received has come from wind farm companies and fishermen. They find it informative, which was our goal.” 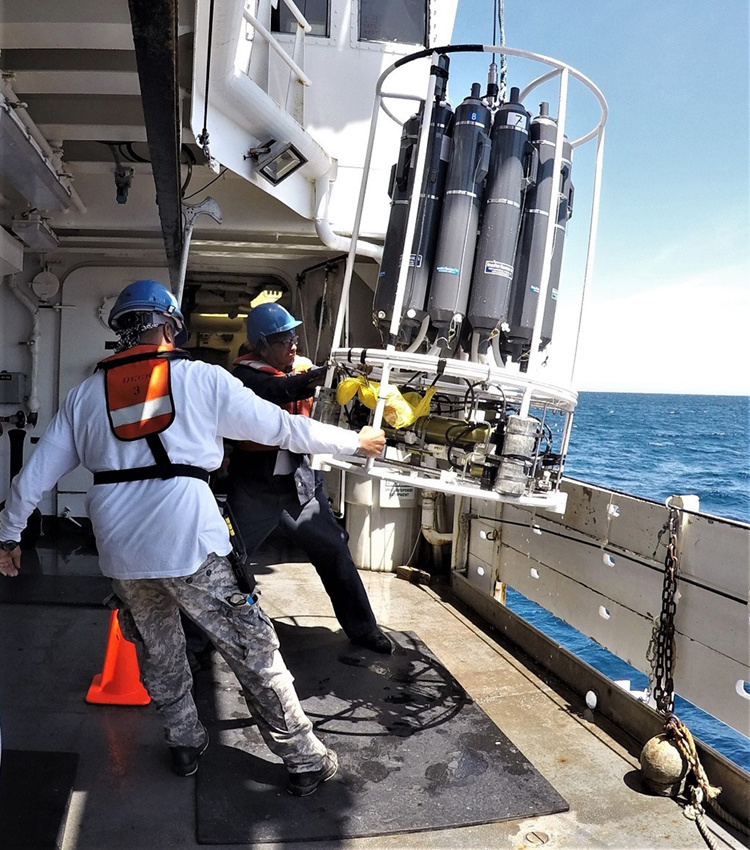 Niskin water bottles in a rosette pattern for sampling the water column at various depths, with a CTD (for conductivity, temperature, and depth) is retrieved aboard the NOAA Ship Henry B. Bigelow during a spring Ecosystem Monitoring Survey. Photo: NOAA Fisheries

The AMAPPS sightings data have also been used in other density models. For example, they have been used in mammal, turtle, and seabird maps available on the Northeast Ocean Data Portal. This portal is a source of data and interactive maps of marine life, commercial fishing, marine transportation, cultural resources, and other types of data that can be used for coastal and ocean planning and management, siting issues, education and research.

Following the successful AMAPPS project in the western North Atlantic Ocean, similar projects have been initiated in the Gulf of Mexico (GoMMAPPS) and the Pacific Ocean (PacMAPPS).