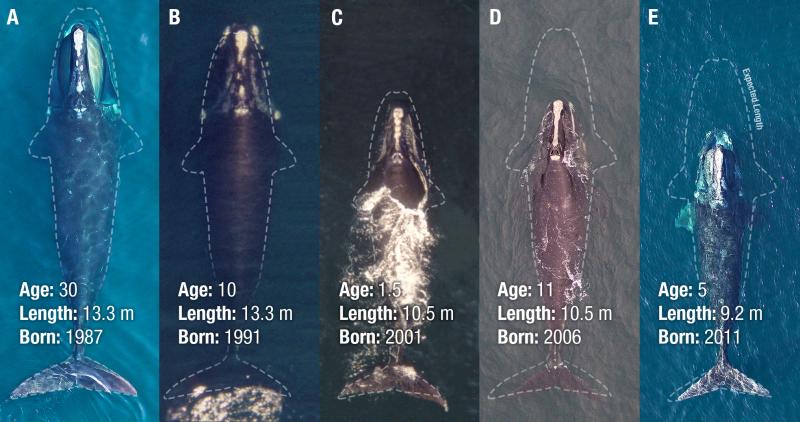 A photo illustration compares the body lengths of North Atlantic right whales, including two stunted whales born in 2006 and 2011. The dotted lines show the expected length of right whales of the same age if they had been born in 1981 with no history of entanglements, or entanglements of their mothers. Scarring from an entanglement is visible near the tail in D, an 11-year-old right whale. The whales were photographed from crewed aircraft in earlier years and, later, by drone. Figure design by Madeline Wukusick. Photographs by John Durban, Holly Fearnbach, Michael Moore, Carolyn Miller, Wayne Perryman, and Morgan Lynn, under NMFS research permits #17355 and #21371.

Entanglements in fishing gear and other factors are stunting the growth of North Atlantic right whales. This is leaving these endangered whales smaller and more vulnerable to other threats, new research shows.

The new findings were published this week in Current Biology. They reveal that even when entanglements do not lead directly to the death of North Atlantic right whales, they can have lasting effects on the imperiled population that may now number less than 400 animals. A North Atlantic right whale born today would be expected to reach a full-grown length of about three feet shorter than one born in 1980, researchers found.

“We normally see these major life-history impacts in heavily exploited commercial species,” said Joshua Stewart, a postdoctoral researcher at NOAA Fisheries’ Southwest Fisheries Science Center and lead author of the new research. “While the average body size decline is striking, there are some truly extreme examples where five- and ten-year-old whales are shorter than a typical one or two year old.”

The calves of female North Atlantic right whales entangled while nursing also grow up to be shorter than expected, according to the research that also included scientists from the New England Aquarium, Woods Hole Oceanographic Institution, and Oregon State University.

“This is one more piece of evidence that the health of the whales is at risk,” said Michael Moore, senior scientist at Woods Hole Oceanographic Institution and a coauthor of the research. “You cannot recover them by just reducing mortality, you’ve got to pay attention to the health of individual whales and address that, too.”

Scientists used high-resolution aerial photographs from airplanes and drones to track the sizes of North Atlantic right whales in the closely studied population. “We were able to measure whales by flying a camera high above them, essentially giving them a health check without them knowing we were there,” said John Durban, an Associate Professor at Oregon State University.

The stunted growth of the whales coincides with an increasing rate of life-threatening entanglements, leaving individual animals less energy to devote toward growth. The scientists suggest that the ongoing stress of serious entanglements may reduce the reproductive rate of females, and possibly affect the survival of both calves and adults.

Entanglements did not explain all of the reduced growth, however. Other factors ranging from vessel noise to shifting availability of the tiny copepods that are their primary prey may also be contributing to their declining health. They may also make them more vulnerable to lethal entanglements.

“There is an increasing human footprint in the ocean, and it’s likely a combination of several compounding factors that are affecting the growth and life history of these vulnerable animals,” Stewart said. He said other whale populations around the world are probably experiencing similar effects from human activities. However, they are not as well-studied as North Atlantic right whales so there is less data to document it.

NOAA Fisheries has designated North Atlantic right whales as one of nine national “Species in the Spotlight” that are highly endangered and warrant focused recovery actions. An Action Plan for the species outlines priority recovery actions, including investigation of the abundance and health of the whales and how that affects their survival. There is also an ongoing Unusual Mortality Event that has been underway since 2017. The primary causes of the UME are entanglements in fishing gear and vessel collisions. This data will help the UME investigation team and NOAA Fisheries understand the impacts of the mortalities and serious injuries documented.

The results underscore the significance of what biologists call “sub-lethal effects.” These effects do not kill whales outright, but drain their energy—making them more vulnerable to other risks, the researchers said.

The body size and condition of whales could affect reproductive rates and survival. It also affects their resilience to other impacts such as climate change and perturbations on and near feeding and breeding areas. This means that decreasing body sizes could translate into declining population trends and affect the overall outlook for North Atlantic right whales. The scientists said that management of human-related impacts on the population requires a holistic approach.

“This study highlights the need for stronger management actions to reduce the impacts of fixed-fishing gear and vessel operations to allow this species to be more resilient to the effects of climate change and, in turn, support a healthier ocean,” said Amy Knowlton, Senior Scientist in the New England Aquarium's Right Whale Research Program and coauthor of the study. The Aquarium curates the North Atlantic Right Whale Catalog and monitors human impacts and their effects on the health of the whales using more than a million photographs. These detailed databases maintained since the 1980s were essential to the study, but such high-resolution information is rare for marine species.

“Implementing proven solutions such as reduced vessel speeds, lower breaking-strength ropes, and ropeless fishing gear more broadly throughout the range are critical and urgent steps needed to stave off the extinction of this species,” Knowlton said.