Burrowing shrimp are more than just good bait for sturgeon and salmon or a nuisance to oyster farmers.They are actually a key part of their environments, and their loss could result in serious ecological consequences. To better understand how to manage their populations along the West Coast, scientists from Oregon State University, the U.S. Department of Agriculture’s Agriculture Research Service, and the Northwest Fisheries Science Center have teamed up to study the diets of burrowing shrimp and the enormous impact they have on the estuaries they inhabit. 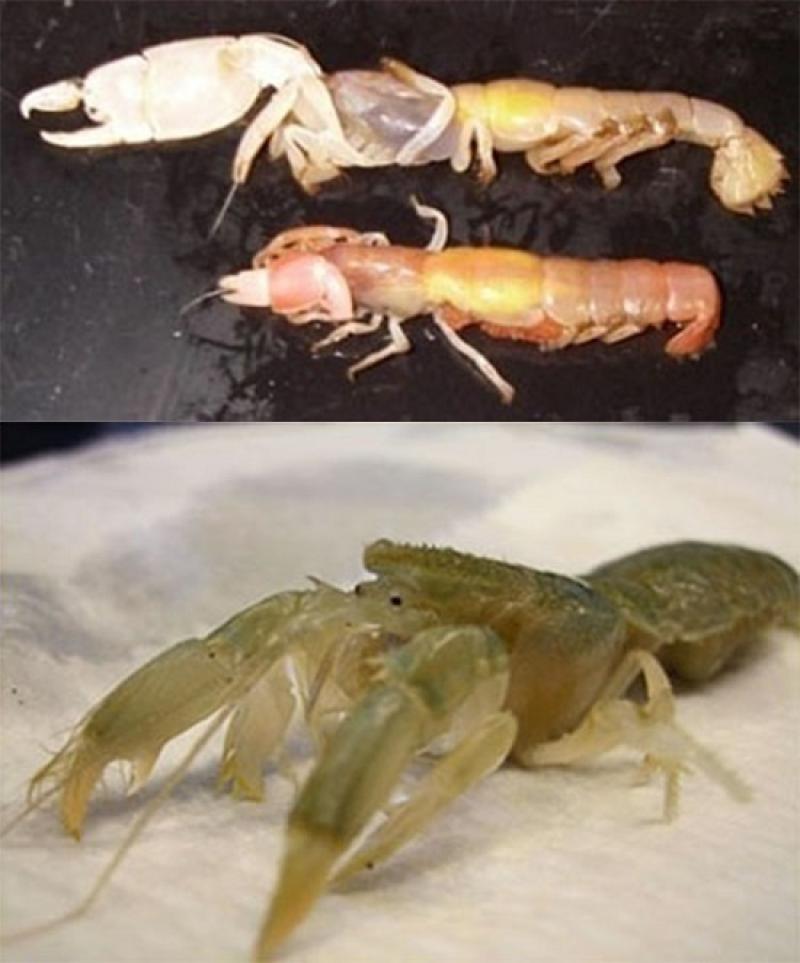 In Danger, but Not “Endangered”

The burrowing shrimp of Yaquina Bay, an estuary on Oregon’s north-central coast, are facing a number of threats. Oyster farmers in Pacific Northwest estuaries want them dead or gone from shellfish beds because their burrowing activity kills oysters. Recreational fishermen collect them for bait. They’re eaten by sturgeon, sculpin, and other aquatic predators. And now a parasitic isopod, most likely carried across in the ballast water of ships arriving from east Asia, is decimating similar mud shrimp populations all over the U.S. West Coast by destroying their ability to reproduce.

At Oregon State University’s Hatfield Marine Science Center in Newport, Oregon, researchers like Dr. Katelyn Bosley (currently affiliated with NWFSC as a National Research Council postdoctoral research associate) have been studying the local shrimp populations in hopes of better understanding the threats they face. Both of the species she studies—ghost shrimp and blue mud shrimp—are not currently listed under the Endangered Species Act. Bosley hopes to keep it that way.

An ecosystem is more than just a collection of plants and animals living in a landscape. It’s a finely tuned machine with many moving parts. Remove any one of them, and you’ll cause stress on all of the others. Eventually, the whole system can change in unexpected ways. (Just try driving without gas in your tank—or oil in your engine!)

Some ecosystems are not only inhabited, but actually created, by “ecosystem engineers.” Think of beavers, whose dams significantly alter the environment by flooding rivers, providing shelter for myriad fish, insects, plants, and birds. Or think of kelp forests, where the kelp plants themselves act as the environment, housing and feeding other species and even influencing the dynamics of the world’s coastal oceans.

Burrowing shrimp are also ecosystem engineers. But because they live underground in the sandy, often-flooded mud of coastal estuaries, most humans aren’t very familiar with them or their environment.

Dr. Bosley, lead author of a recent study on the diets of burrowing shrimp, describes it like this: “When you’re going out on the tide flat, all it looks like is sand and holes. But down underneath, it’s this great network of burrows and galleries and shrimp—in some areas, up to 600 per square meter.

“These shrimp are constantly changing and influencing their environment, both physically and chemically. They’re bioturbating, which is just moving the sediment around; they’re bringing plant material down, releasing nutrients out into the environment; and this creates a dynamic chemical and physical environment that is, in itself, an ecosystem.”

What would happen if the shrimp suddenly disappeared from the estuary?

“Well, we don’t really know,” she says. “But it’s thought that we would have some real issues with overloading of nutrients, because they’re so responsible for balancing the nutrient levels there. What might happen, more or less, could be a huge algal bloom.”

Without the ecosystem engineering provided by the shrimp, the system could change dramatically.

The problem is, oysters are also ecosystem engineers. That, and they have a $170 million industry looking out for their interests. Compared to oysters, burrowing shrimp, which are not eaten by humans, are usually considered to be pests.

“Yeah, up until recently they’ve been applying topical pesticides directly to the tide flat to kill the shrimp in Washington State,” Bosley says. “There’s obvious environmental issues with that, though, so they’re trying to move away from those practices.”

But in order for this to work, we first need a better understanding of shrimp population dynamics. What makes an ideal environment for burrowing shrimp? Previous research had shown that shrimp living in different parts of the Yaquina River estuary grew to different sizes at the same age. Bosley and her team thought this was likely due to differences in food quality and availability at the different sites.

Their study was the first to examine the diets of burrowing shrimp in a controlled way.

Not very surprisingly, the researchers were right: shrimp grow faster in areas where the food sources are better. But now we know a lot more about what, exactly, makes a good food source for a shrimp, and which locations within the estuary are most likely to house abundant populations of burrowing shrimp.

Why is this important? Because it can help Bosley and her team make sound, informed management recommendations.

“In terms of the population dynamics,” Bosley says, “we can use this information to model the shrimp populations to predict what’s going to happen at a given location.

“If it’s an area where we would anticipate the population going down, having weak reproduction, or growing slowly—perhaps, for aquaculture, that would be a good location, because you’d minimize the interaction between the shrimp and the oysters.

“Or conversely, you’ll identify areas where there are fast-growing shrimp because of the high-quality, high-food environment. Clearly, by assessing the nutritional status of the environment and knowing that shrimp live there—maybe that’s not a good place to grow juvenile oysters at certain times.”

Bosley hopes her research will spark further interest in the study of burrowing shrimp. “This is all new research,” she says. “We haven’t really taken it to the next level, but maybe somebody will, some day, based on this information.”

Ideally, that next level would be conservation of the ghost and blue mud shrimp populations in a way that allows both them and their oyster neighbors to thrive together in the estuarine environments they both call home.