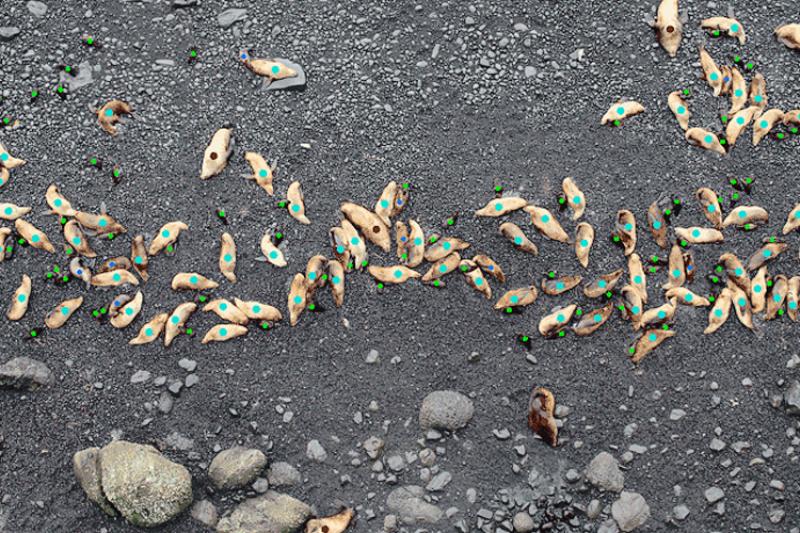 Biologists with a big data challenge are turning to the computer science community for a solution. NOAA Fisheries’ Alaska Fisheries Science Center researchers are working with the data-science site Kaggle. Kaggle connects people to coders who can help automate processes to save time and money. Through Kaggle competitions, code developers compete to find innovative solutions.

The platform has been used by scientists and companies around the world but is new to the Center. The new project is called NOAA Fisheries Steller Sea Lion Population Count. The competition is live now and runs through June. At the end of the project, Center researchers hope to have algorithms that can help them process and count Steller sea lions in aerial images.

Every year, two Center researchers review up to 20,000 aerial pictures of sea lion sites in three to four months. During that time, this large task is their main focus. The two biologists work independently, with each counting sea lions from the images. After making initial calculations, they review their totals together to make sure their figures are accurate. If there’s a discrepancy both review a particular site again. The labor-intensive process is crucial to knowing how well the populations are faring, especially since the western stock remains endangered. But it’s also rudimentary work. Biologist Katie Sweeney wanted to explore a better way.

“We’ve been toying with the idea of automating counts because the current way is so time consuming and takes away from other research we could be doing,” Sweeney said.

By developing code to identify certain scenarios, a computer can be the workhorse, sorting through big data and making initial findings scientist can later review. That frees up researchers to make advances in other areas of study. Can you spot the four Steller sea lion pups in this photo? Scroll below to see where they are. - Photo: NOAA Fisheries

“We know the technology is there and that it’s totally possible. But it needs to be modified to our unique task,” Sweeney said. The Center had worked with a private developer in the past. The developer volunteered to take an existing algorithm that identified objects in images to help review Steller sea lion pictures. Unfortunately, the code wasn’t able to tackle complex images and varying natural conditions. Wet Steller sea lions appear darker than dry animals. Pups are dark brown, almost black, making them very difficult to differentiate from rocky shores. A trained scientist’s eye is a remarkable thing.

Still, the potential was promising. Last year, a NOAA grant to support the development of innovative technologies that create efficiencies became available. Sweeney and her team got to work creating a proposal. The Kaggle competition is a uniquely effective option.

“I think it’s really cool we can open it to a group of people and see all of these creative solutions. That was the whole lure,” Sweeney said. With Kaggle, the right person, with the right solution, finds you. Center scientists are essentially getting multiple algorithms that could solve their problem, stretching their research and development money even further.

Another area of innovative research the Steller sea lion team is exploring is crowdsourcing efforts to identify specific sea lions in ground photos. Steller Watch launched last week and it is a companion project to the Kaggle competition. Steller Watch’s top task is spotting the presence of markings on animals and that still requires a human eye.

For the Kaggle competition, creating the right code is the first, important leap forward to potentially automating the yearly Steller sea lion count in the future.