NOAA and partners have completed the final stage of restoration in an effort to remove Michigan’s Manistique River from a list of "toxic hot spots" in the Great Lakes. 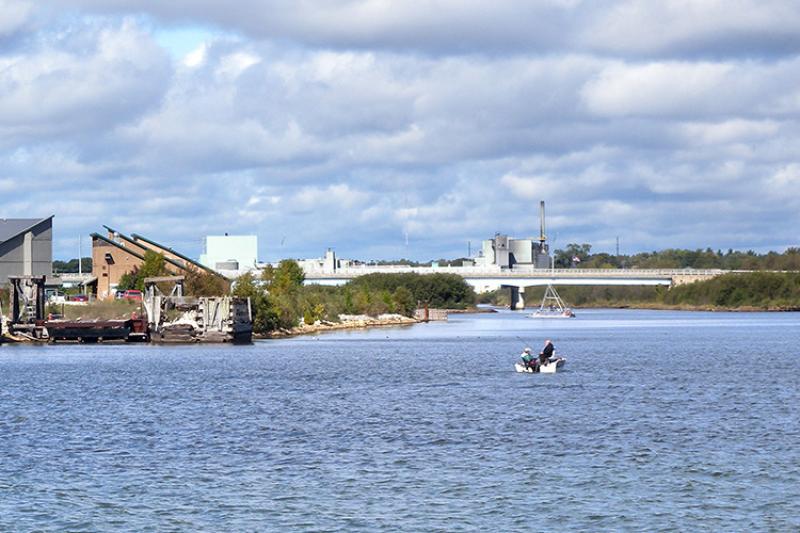 After years of pollution from industrial waste, Michigan’s Manistique River was listed as one of the most environmentally degraded areas in the Great Lakes region, known as Areas of Concern. For years, NOAA has supported the restoration work needed to remove the river from this list, restore habitat for native fish species, and support a safe and healthy waterway for local communities to use. As of December 2019, partners have completed the final round of sediment dredging called for in the effort to delist the Manistique River Area of Concern.

As it makes its way from its headwaters near Lake Superior to its mouth on Lake Michigan, the Manistique River flows through miles of heavily forested land in the Upper Peninsula. This natural connection between forest and lake turned the City of Manistique, located at the mouth of the river, into a significant lumber port. Over time, pollution from local industry—including sawmills, a paper mill, and wastewater treatment plants—contaminated the Manistique River.

When pollutants from industrial waste and other sources settle out of the water, they can mingle with mud, sand, and clay on the bottom. These contaminated sediments can pollute water and sediments and cause a host of other environmental harms. In particular, PCBs, or polychlorinated biphenyls, are toxic chemicals once widely used by industry that are known to cause health problems in fish, wildlife, and humans. Over the years, PCB-contaminated sediments in the Manistique River led to restrictions on eating locally-caught fish and more. 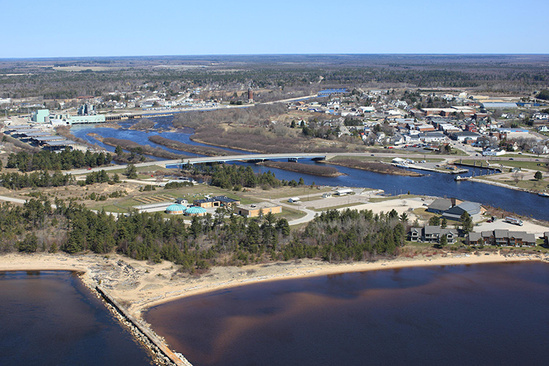 The Manistique River and harbor, seen from above. (Photo: U.S. Army Corps of Engineers)

Since 2010, the NOAA Restoration Center has worked with our partners through the Great Lakes Restoration Initiative to complete restoration work needed to delist Great Lakes Areas of Concern in the United States. Through this initiative, we’ve supported more than 70 projects to protect and restore habitat in the eight Great Lakes states.

In the Manistique River Area of Concern, three beneficial use impairments have already been removed: degraded benthos (organisms that live in the riverbed), loss of fish and wildlife habitat, and beach closings. In 2019, construction was completed on NOAA-supported work that will contribute to removing the final two impairments, restrictions on fish consumption and restrictions on dredging. Once those two impairments are removed, the Manistique River could be completely delisted as an Area of Concern. 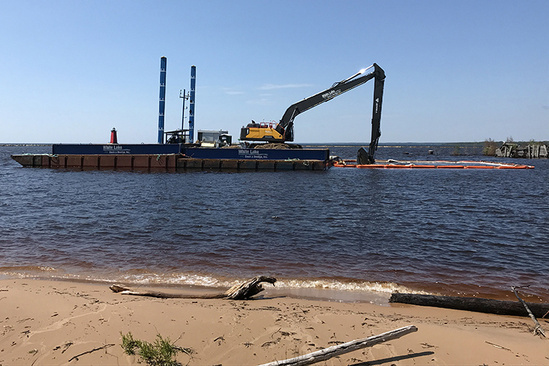 Work is underway to remove more than 2,000 dump trucks worth of contaminated sediment from the Manistique River. (Photo: Michigan Department of Environment, Great Lakes, and Energy)

With funding from a NOAA Great Lakes Habitat Restoration Grant,the Michigan Department of Environment, Great Lakes, and Energy removed more than 40,000 cubic yards—more than 2,000 dump trucks worth—of contaminated sediment from the Manistique River in 2019. Barges and excavators removed sediment from high-contamination areas near the river mouth, the sediment was processed and sent to a landfill, and a layer of clean sand infused with activated carbon was spread over portions of the river bottom.

Over the next several years, partners will test the levels of PCBs found in fish and sediment in the Manistique River Area of Concern. If testing confirms the residual PCB contamination has been fully removed, it should clear the way for removing the two remaining impairments and allow for this Area of Concern to be delisted.

Removing these pollutants will support fish species that use the river for habitat, such as smallmouth bass and northern pike. Fewer contaminants in the water will lead to lower concentrations of PCBs in the fish that live in and near the harbor—including those eaten by people and wildlife. With the environment returned to a healthier state, both local residents and visitors will benefit from a safe, healthier river for fishing, boating, recreation, and more.

Last updated by Office of Habitat Conservation on December 18, 2020