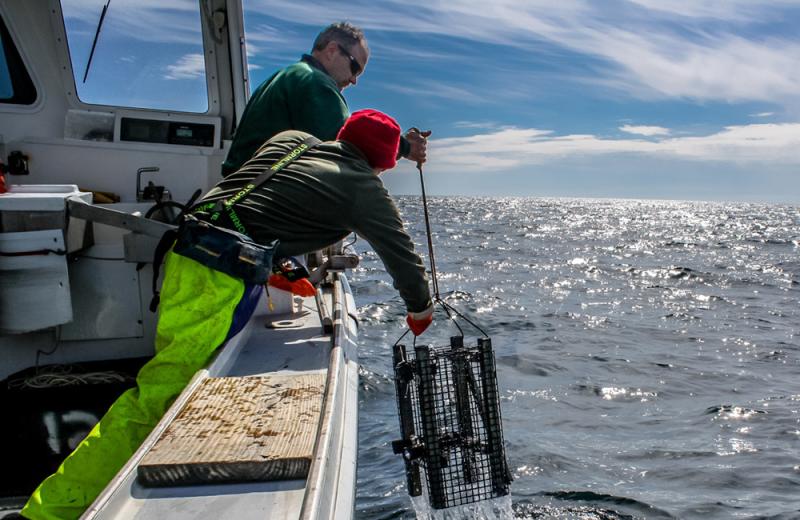 Two Massachusetts commercial longline fishing vessels and staff from the Northeast Fisheries Science Center’s (NEFSC) Cooperative Research Branch will be working in the Gulf of Maine over the next three weeks. They began staging October 5 on the 50-foot F/V Mary Elizabeth from Scituate and 40-foot F/V Tenacious II, which departed from Sesuit Harbor in East Dennis October 10 for the first of several two-to-four day trips.

The cruises have been timed to occur at about the same time as the long-running NEFSC bottom trawl survey, and its 45-sampling stations are distributed over six of the same sampling areas used for the federal survey. This makes it easier for analysts to use the longline survey data along with that collected in the bottom trawl survey.

Using more than one gear type for abundance surveys provides a more complete picture of the fish size composition present in a region as each gear type catches different sizes. For example, in the 2014 and 2015 surveys, cusk were the third most abundant species caught by hook, but the 38th most abundant by weight when surveyed by net. Silver hake are easier to catch in nets, being the second most abundant fish caught in NEFSC net surveys during 2014 and 2015, but ranking 21st during the longline survey.  Surveying with different gear types can help account for these differences and give insight into fish behavior and habitat use.

The cooperative survey uses tub-trawl bottom longline gear, which consists of baited hooks attached to a longline. The baited line is carefully spooled into a crate or tub, then deployed from the vessel, weighted with anchors so it will lie in the rough bottom. A float attached to the end of the trawl marks the spot where recovery of the gear begins.

The Cooperative Gulf of Maine Bottom Longline Survey originated three years ago as a way to  get data on species that prefer rocky habitat and are thus not well sampled by trawl gear.  Researchers and fishermen knew that more survey and biological data were needed to improve assessments for these species, several of which are economically important. Over its three years, the survey has collected more than 6,200 life history samples and 1,300 samples for detailed reproductive and ageing studies.

Thirty-six species were caught in the first three years of the longline survey. These include seven “data-poor” species, including Atlantic wolffish, Atlantic halibut, and cusk. Two species, cusk and thorny skate, were being reviewed by NOAA Fisheries to determine whether they warranted listing under the Endangered Species Act. The initial data from the first three years of the survey indicated that both cusk and thorny skate were more abundant that previously thought.

Seventeen of the 36 species are considered “data-rich” species, at least eight of which are being caught with sufficient frequency for the data to potentially provide a supplemental relative index for use in stock assessments. These include cod, haddock, white hake, red hake, spiny dogfish, cusk, thorny skate, and barndoor skate.

As the survey has developed, the commercial vessel captains have helped establish protocols to maximize gear efficiency and consistency, such as how to account for variations in tidal speeds at sample sites. The longline gear is deployed approximately one hour prior to slack tide to standardize the set relative to the tide. During the 2016 survey, site-specific tidal modeling was provided by NEFSC oceanographers to help the captains further standardize gear setting. The captains have also helped determine gear design, vessel operations, bait, and station-siting protocols.

To assess how the gear fishes, a temperature-depth probe is mounted on the anchors at each end of the bottom longline gear, and a Seahorse Tilt Current Meter is clipped on the line near each anchor. This instrument measures near-bottom velocities of the current, a unique way to measure water flow over the longline gear. It also provides data to potentially model the bait plume size, which could help estimate the maximum area in which fish would be attracted to the longline gear. The tilt current meter also provides a variable that analysts can include in a model to control for variations among fishing locations.

Bottom-type sub-stratification is fundamental to the survey design. While the gear is soaking, a Go-Pro camera on a frame with lights is lowered to the bottom for 5-10 minutes so the crew can observe and verify the bottom type at each station. The camera provides observations to groundtruth the bottom classification and potentially refine it for localized variability and additional detail on the habitat, such as substrate size and invertebrate communities.

The bottom longline gear deployed in this survey is one nautical mile long, about the distance covered by one pass of the federal trawl survey gear. Each hook is baited with frozen Argentine squid, recommended for its high oil content that attracts a wide variety of fish species.

At each station, the total catch weight and individual fish length measurements are recorded. For select species and sizes, additional biological data and samples are collected including sex, maturity stage, individual weight, gonad and liver weight, and age. Any tagged fish or sharks caught are also recorded. During the first few years, several sharks and hundreds of dogfish and skates have been tagged.