Carolyn Griswold, a longtime employee at NOAA Fisheries Narragansett Laboratory in Rhode Island, was honored recently by the American Fisheries Society (AFS) for her contributions to the organization over many years. 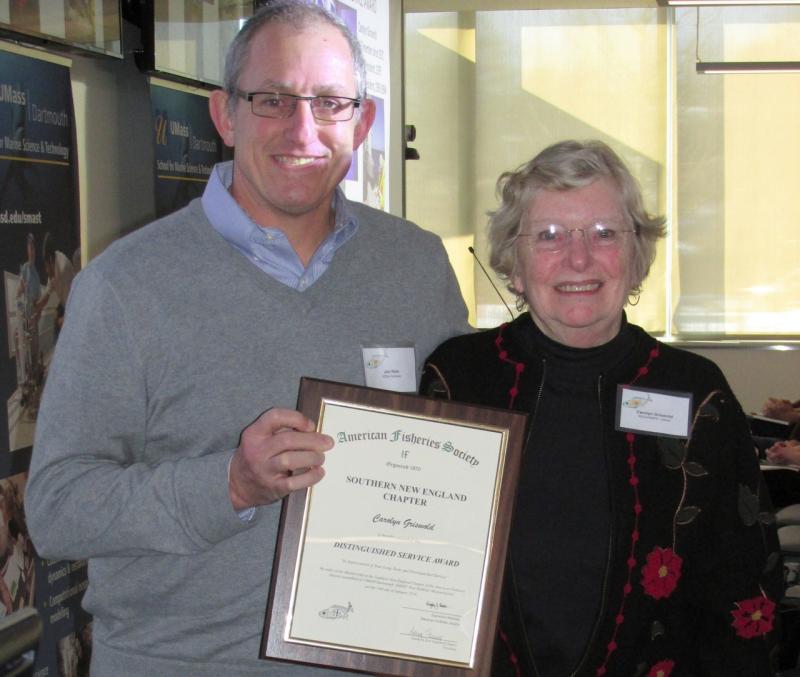 Carolyn Griswold, a longtime employee at NOAA Fisheries Narragansett Laboratory in Rhode Island, was honored recently by the American Fisheries Society (AFS) for her contributions to the organization over many years.

Griswold, also known in Narragansett by her nickname Robin, was recognized with a Distinguished Service Award in appreciation of her long-term service, dedication and commitment to the Southern New England Chapter (SNEC) while serving on the Board of Directors from its inception in 1992 until January 2018. She is a life member and remains active in SNEC, currently serving as an at-large member.

Griswold began her career at the Northeast Fisheries Science Center's (NEFSC's) Milford Laboratory in Milford, CT in 1966, then part of the U.S. Bureau of Commercial Fisheries. In 1967 she moved back to Rhode Island and worked at the U.S. Public Health Service Shellfish Sanitation Lab, which became the EPA laboratory on the Bay Campus of the University of Rhode Island. Two years later she moved across the street to the Narragansett Laboratory of the U.S. Bureau of Sports Fisheries, which became part of the NEFSC and NOAA’s National Marine Fisheries Service in the early 1970s.

Throughout her career Griswold worked primarily on larval fish and zooplankton with excursions into environmental impacts such as gasoline and oil spills and power plant effects, in particular the Pilgrim and Brayton Point power plants. She was also involved in natural environmental impacts such as the famous ‘slub’ (net fouling) events in the Gulf of Maine in the 1980s. Slub refers to an abundance of discarded mucus "houses" of cold-water zooplankton larva that became slimy and fouled fishing nets.

She retired from the Ecosystems Monitoring Group at the Narragansett Laboratory and from NOAA Fisheries in 2009.

Griswold joined AFS in 1971 and has been a member for 47 years. She served as the first female President of the AFS Southern New England Chapter (SNEC) in 1979 and as the first female President of the Northeastern Division of AFS, which has more than 15 chapters from Canada to the mid-Atlantic states, from 1993 to 1994.  She also served as scientific editor of the AFS North American Journal of Fisheries Management for eighteen and a half years, continuing into her retirement.

In 2004 she received the Meritorious Service Award from the American Fisheries Society, presented annually to an individual AFS member "for loyalty, dedication, and meritorious service to the Society over a long period of time and for exceptional commitment to the programs, objectives, and long-term goals of the Society." She received the SNEC’s Award of Excellence in 2008 for “exceptional contributions to the field(s) of fishery administration, education, management or research”.

In 2015, Griswold was elected a Fellow of the inaugural class of the American Fisheries Society. AFS Fellows are members who have made outstanding or meritorious contributions to the diversity of fields included in AFS. Contributions can include their efforts in leadership, research, teaching and mentoring, resource management and/or conservation, and outreach/interaction with the public."