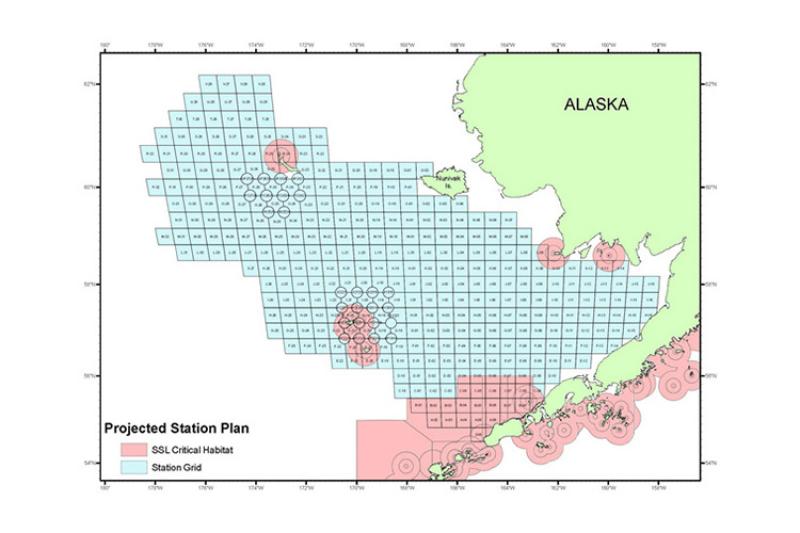 "We conduct research surveys to collect biological information that is critical for our fish stock assessments," said Douglas DeMaster, science and research director, Alaska Fisheries Science Center. "Understanding how well fish stocks are doing is important because fishermen and managers rely on these data to set sustainable fishing quotas each year."

Information collected as part of these surveys and other available data on oceanographic conditions, fisheries, and protected species are integrated to provide a more comprehensive understanding of how marine ecosystems are affected by environmental changes, commercial fishing activities and climate change.

During surveys, NOAA scientists sort, weigh and count species collected by each trawl, with an emphasis on biological data for target species. They will also collect specimens and data on various species, as requested by cooperating scientists, agencies, and institutions. For example, the eastern Bering Sea groundfish and crab shelf survey is a collaborative effort between NOAA and the Alaska Department of Fish and Game. In the event that a trawl brings in rare fish and invertebrates, scientists will collect and preserve the specimens.

"This part of the Bering Sea is one of the most productive fishing areas in the world in terms of both species abundance and commercial value," said Bob Lauth, lead scientist for the Eastern Bering Sea Survey Group. "It's a dynamic environment. Our surveys provide unique snapshots of how fish, crabs, and other marine life are responding to changing climate. The information we collect supports ongoing fish biology and behavior studies and other research efforts, all of which will improve our ability to make future predictions about trends in fish and crab populations".

NOAA Fisheries staff will be onboard FVs Alaska Night and Vesteraalen to conduct the annual shelf survey, and aboard the FV Cape Flattery to conduct the biennial slope survey. The shelf and slope survey cruises will operate from May 26 to August 3 in the eastern Bering Sea from the Alaska Peninsula to US – Russia Maritime Boundary in water depths ranging between 60 and 4000 ft. 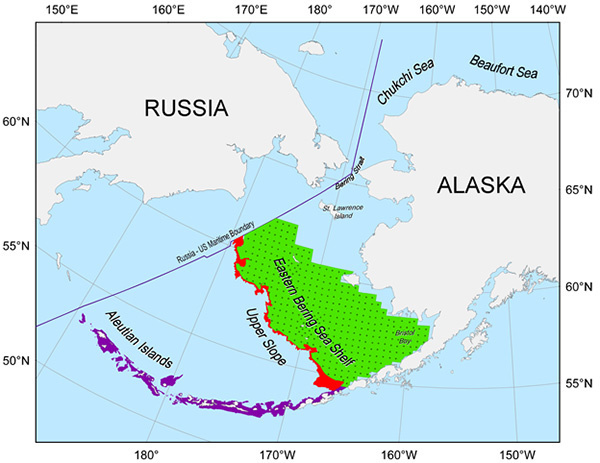 Proposed survey areas for the acoustic-trawl survey of the eastern Bering Sea shelf and Cape Navarin area of Russia, Upper Slope, and the Aleutian Islands.

The acoustic-trawl survey will be conducted from the NOAA ship Oscar Dyson along the eastern Bering Sea shelf and Russian waters from June 12 to August 17. Scientists are collecting new data to determine the health of the commercially important walleye pollock stock. They also plan to use a stereo camera system (CamTrawl) in the midwater trawl to see how effectively the survey nets are sampling available fish.

"We always want to maximize the use of ship time by conducting other studies as time permits," said Taina Honkalehto, chief scientist for the survey. "So we will be collecting physical oceanographic data, such as temperature, salinity, fluorescence and oxygen levels, samples of krill for onboard experiments and measuring ambient light (shipboard, underwater) to associate with fish vertical distributions patterns."

On this survey, extending from June 1 to August 12, scientists continue periodic assessments of Aleutian Islands groundfish and crab stocks to learn more about their health, abundance, and distribution.

"Typically about half of the total research catch is comprised of commercially important Pacific cod, Atka mackerel, and Pacific ocean perch," said Wayne Palsson, chief scientist for the survey. These species tend to occur in different locations along the Aleutian Island chain. Cod are most abundant in the eastern and central Aleutians, while Pacific ocean perch and Atka mackerel are most abundant in the central and western Aleutians. But the waters around the Aleutians are host to a diverse fauna of other fish and invertebrates and we are still discovering new species during our surveys".

The survey area extends from Unimak Pass (165° W longitude) westward on the north side of the Aleutian Islands to the Islands of Four Mountains (170° W longitude and then continues westward along the northern and southern sides of the Aleutian Islands, extending to Stalemate Bank (170° E longitude) near the U.S.-Russian border. Station depths range from nearshore (minimum navigable depth approximately 15 m) to the 500 m. The survey area encompasses critical habitat of the endangered western population of Steller sea lions.