More juvenile fish have been using the rapids restored by NOAA and partners on the St. Marys River, according to a recent study. 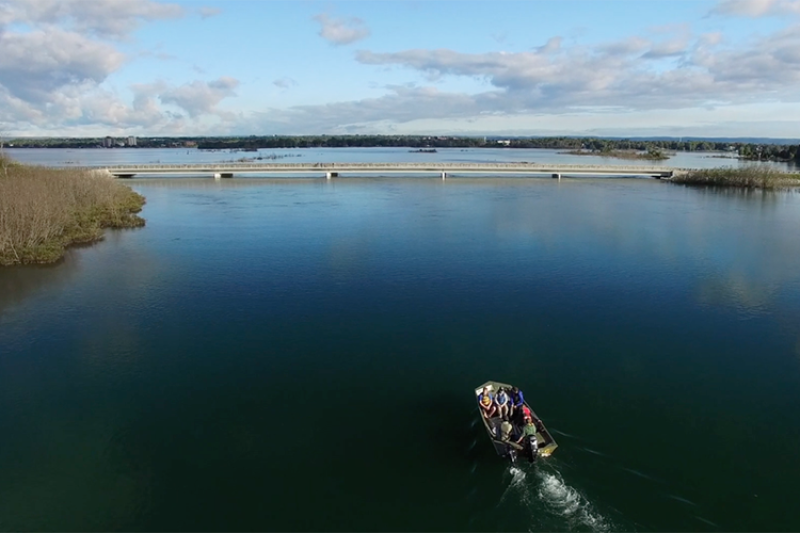 An aerial view of the Little Rapids site, after the project was completed.

In 2016, NOAA and partners completed a project to restore fast-flowing rapids on the St. Marys River in Michigan’s Upper Peninsula. The work has helped increase the number of juvenile fish in the area, according to a recent study published in the journal Restoration Ecology.

Over the past century, the St. Marys River has lost more than half of its historical rapids due to hydropower generation and navigational alterations. Important Great Lakes species like lake sturgeon and whitefish rely on rapids for spawning habitat. Restoring these lost rapids was determined to be a critical step in removing the river from the list of Great Lakes Areas of Concern.

In 2016, NOAA, the Great Lakes Commission, and a diverse group of partners worked to restore Little Rapids. Little Rapids was one of five rapids areas in the river that had been lost. A new multi-span bridge was installed, restoring natural water flow to roughly 70 acres of habitat used by fish and other aquatic organisms that rely on rapids. The bridge also features a walkway protected from road traffic that allows for safe and easy access for fishing.

Monitoring of the restored rapids has shown promising results, according to the study. The number of juvenile fish using the area has almost doubled. Adult walleye and yellow perch, both native Great Lakes fish species, have been observed using the area.

So far, whitefish and lake sturgeon—additional Great Lakes fish species targeted by the project—have not been seen spawning at the Little Rapids site. But the study notes that it can take several years for certain species to respond after a habitat restoration project is complete. Experts are hopeful these fish will find and use the habitat in the future.

Researchers plan to continue monitoring the river over the next several years. Long-term monitoring plays a key role in evaluating how habitat restoration continues to help species recover, sometimes many years after a project has been completed. In particular, the Little Rapids site offers a unique opportunity to monitor restoration in a working river that has complex social and economic connections. Results from this monitoring can be used to inform future large-scale restoration projects in the Great Lakes.

In addition to benefiting fish, the project is providing safe opportunities for public access and recreation. Prior to construction, fishing opportunities near Little Rapids were limited for those without a boat. Now, members of the community are able to use the bridge’s new walkway and platform for fishing access. Pedestrian access is also separated from the main road by a barrier, improving the safety of people using the bridge for fishing and to view the river.

NOAA works through the Great Lakes Restoration Initiative to restore habitat across the Great Lakes region. Since 2010, we have supported more than 70 projects through this initiative. Our work has restored more than 4,500 acres of habitat for fish and wildlife and opened up more than 500 miles of rivers and streams to fish migration.

Last updated by Office of Habitat Conservation on April 27, 2021