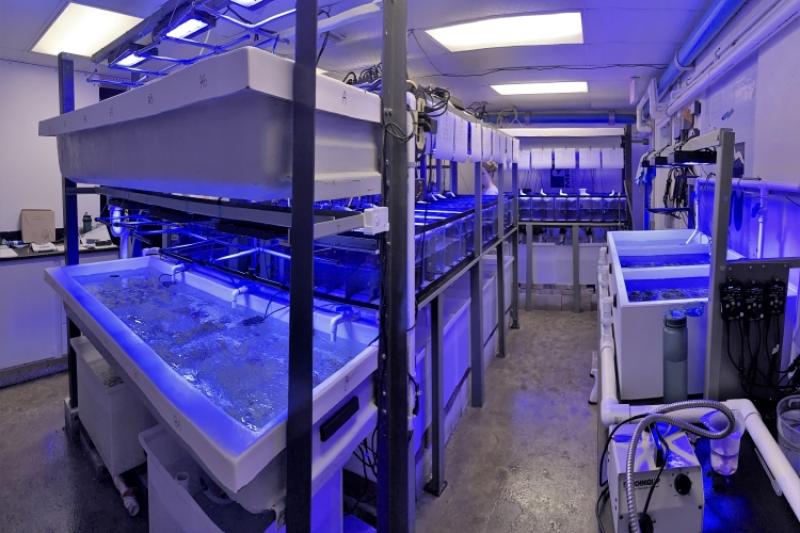 Did you know that coral reefs cover only 0.1 percent of the Earth’s surface, but support more than 30 percent of its marine biodiversity? Coral reefs are critical to fisheries production, coastline protection for communities, recreation, and tourism. They provide a myriad of other benefits to coastal populations.

However, corals and the vibrant ecosystems they support are badly threatened. Changing global conditions such as increasing sea surface temperatures and ocean acidification due to climate change, as well as disease and pollution, are some of the major drivers of significant coral loss. Scientists study what makes some corals more resistant to these increasingly common stressors to facilitate the recovery of populations that can persist under current and future environmental conditions.

In 2021, Mark Ladd, Ph.D. and Allan Bright of the Coral Research and Assessment Lab (CoRAL) team constructed a wet lab facility. Located at the University of Miami’s Experimental Hatchery on Virginia Key, it substantially improved their capacity to conduct research on coral restoration.

Historically, the CoRAL team had limited access to seawater systems. Limited capacity coupled with the discrete timing of coral spawning restricted the amount of research the CoRAL team could conduct. They have continued to expand the wet lab close to the center’s facility in Miami, Florida to ensure efficiency and advancements with their coral science.

In October 2022, Bright and Ladd spearheaded another expansion of their wet lab facility, making their team a “one-stop shop” for coral science. It is one of the few coral research facilities in the nation that can house and allow scientists to conduct all of these aspects of research on Endangered Species Act-listed species of coral:

The expansion includes 30 independent, experimental tanks. Each tank’s temperature, water flow, and light are controlled separately. This enables the team to precisely regulate environmental conditions required by experiments on various species. Ladd elaborates, “Tank-based research often suffers from low replication due to a limited number of aquaria suitable for research on corals. To have so many tanks that are independent and can be individually controlled is really unique! This is a great expansion for coral science in the Southeast.”

The CoRAL team wants to advance their research capacity to more effectively leverage their coral spawning monitoring and collections. These efforts require substantial planning, effort, and time just to produce young corals that can be raised for research. Because most corals only spawn once a year, it is critical to take advantage of the opportunity to collect gametes that can be used to generate new coral recruits. Back in the lab, corals grow very slowly, even under ideal conditions, with some species only growing a few centimeters per year.

Ladd explains, “Growing young corals requires constant attention; they are like infants and need a lot of nurturing. We raise them to a size where we can use them for research and to plant them back into their natural environment for restoration efforts.”

The additional space and added tanks will give our team the capacity to conduct research at various times during the coral life cycle. The CoRAL team is excited to add more coral species to their experiments and find ways to improve the success of efforts to restore dwindling coral populations and the diverse communities they support.

Our newly expanded and unique coral facility would not be possible without our partners.

We look forward to sharing our results from experiments conducted in the expanded wet lab once complete. Additional funding for these experiments was received to support our research.