Have you caught and released reef fish, only to see them float away on the surface? The Return 'Em Right project is now providing recreational anglers Gulf-wide with the knowledge and tools—for free—to improve reef fish survival. 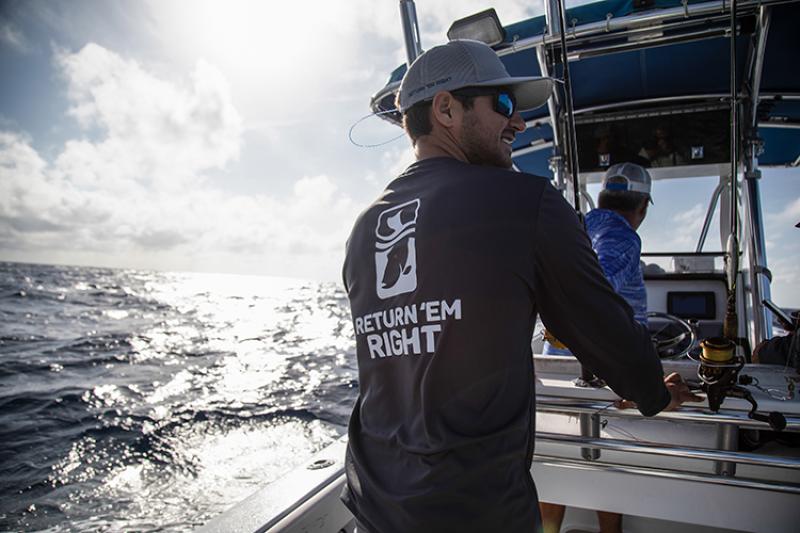 Return 'Em Right is a coalition of organizations committed to increasing the survival of reef fish that are caught and released in the Gulf of Mexico. The project is now making training and gear available to interested recreational fish anglers in the Gulf. Anglers can visit returnemright.org to be one of the first to get free gear (valued at $100).

The project's goal is to increase survival of reef fish that are caught and released by providing tens of thousands of interested anglers with an opportunity to learn best release practices. In return, anglers receive a package of free release gear that will help reduce fish mortality from barotrauma, a pressure-related injury. Improving survival of reef fish that are released immediately benefits both anglers and the ecosystem.

Many anglers have experienced the unpleasant sight of reef fish, such as snappers and groupers, floating away on the surface after release. Floaters occur due to barotrauma, a pressure-related injury that fish experience when reeled up from depth. The change in pressure from the seafloor to ocean surface causes gas within the body and tissues of fish to expand. This displaces their organs and leaves the fish bloated and unable to return to depth.

Why Do Floaters Hurt a Fishery?

When left untreated, barotrauma leads to a high percentage of reef fish dying after release. Catch and release mortality affects millions of fish annually. Each year, more than 10 million federally managed reef fish are released, and at least 1 million of those will die after release. The fish that die are estimated and counted against the quota anglers are allowed to keep. With more people fishing than ever before, reducing catch and release mortality is a top priority for anglers and resource managers.

Anglers play a critical role in helping reef fish survive by using best release practices and taking action when fish need additional help returning to depth. Return 'Em Right focuses on emphasizing practices that will give each fish their best chance of surviving. The program offers an online training of best practices that assists anglers in:

Upon completion of the training and while supplies last, Gulf of Mexico reef fish anglers will be shipped a package of free release gear to use out on the water.

How Can Anglers Help Fish Return to Depth?

Historically, venting fish has been the most common method to release gas in the body of fish and help them return to the bottom. Anglers can effectively vent fish by using a sharp, hollow device to penetrate the abdomen of a fish, allowing excess gas to escape. Although proper venting can save fish, some anglers might incorrectly vent fish, or use inappropriate tools such as ice picks, both of which cause additional harm to fish.

Today, research supports the use of descending devices in many cases as the preferred way to help fish suffering from barotrauma survive release. Descending devices are weighted devices that help fish overcome buoyancy and barotrauma by releasing them at depth. As a fish is descended down the water column, the gas within its body recompresses, and the fish returns to a normal state and can swim off on its own. There are several different types of descending devices including lip clamp styles, inverted hooks, and weighted boxes or crates.

What Can You Do? Say No to Floaters

Doing your part to ensure reef fish survive release contributes to the health of the fishery and the future of the sport. For every 1 percent of landed and released fish anglers save through learning and using best release practices, more than 100,000 reef fish could survive to grow, possibly spawn, and be caught again.

Release gear is now required to be on board. The DESCEND Act, which went into effect on January 13, 2022, requires anglers to have a venting tool or descending device onboard while reef fishing in Gulf of Mexico federal waters. Knowing how and when to use the gear will provide the greatest benefit to the fishery. Return 'Em Right, which is separate from the DESCEND Act, is a great way for anglers to gain that experience. Anglers should access the Return 'Em Right online review to educate themselves on how to properly use release gear and make successfully releasing fish a positive part of their fishing experience.

This $30 million project was selected and funded by the Deepwater Horizon Open Ocean Trustee Implementation Group as part of the 2019 Open Ocean Restoration Plan. Reef fish species are recreationally, commercially, and ecologically important to the Gulf of Mexico, but were substantially harmed by the 2010 Deepwater Horizon oil spill.

They are working in collaboration with a coalition of anglers, small businesses, industry groups, state agencies, universities, government and non-government organizations committed to maintaining healthy fish stocks and fishing access in the Gulf of Mexico.

The project also will conduct post-release monitoring and studies to assess effectiveness of the work and evaluate the success of training and outreach efforts. This information will be shared with anglers at outreach events. Together, these efforts will help increase the number of fish that get back down to depth safely, enhance angler contributions to reducing reef fish mortality, and provide improved fishing experiences for anglers.

Last updated by Office of Habitat Conservation on May 10, 2022