Scientists assessed the uku stock and found that it is not overfished, and overfishing is not occurring. 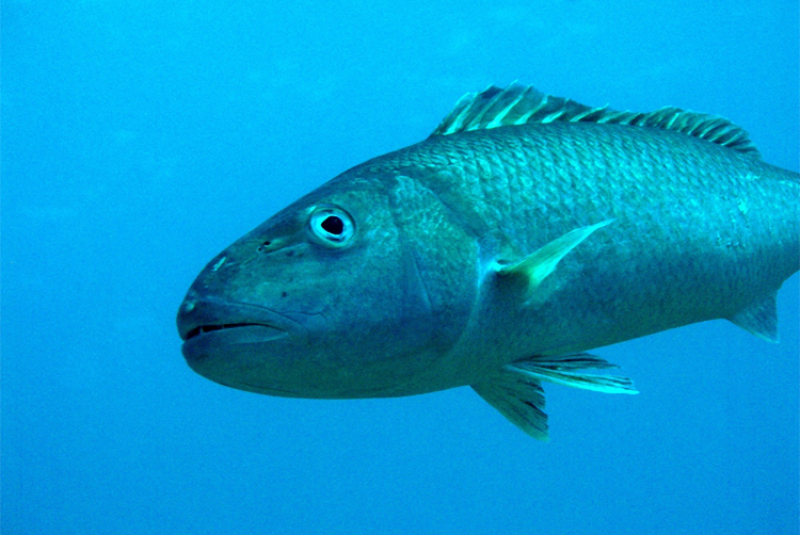 The ukupalu snapper, more commonly known as “uku,” is a popular fish among commercial and recreational fishermen in Hawaiʻi. They live at depths of 60 to 650 feet, and fishermen typically catch them using deep handlines with baited hooks. Fisheries harvest around 240,000 pounds of uku every year. Commercial fisheries catch around 109,000 pounds and recreational fisheries catch an estimated 131,000 pounds. Fishermen commonly consume them at home or sell them to restaurants where their clear, firm flesh and delicate taste make them a popular dish. Uku can be baked, steamed, or simply served fresh as sashimi.

Scientists first assessed the Hawaiʻi uku population along with 27 other reef fish in 2017. They used a relatively simple assessment model based on the average length of uku in the catch in recent years. This assessment determined that overfishing was not occurring for uku, but this simple model resulted in much uncertainty. It could not determine if the stock was overfished.

"Overfishing" means people are catching too many fish. This is different from "overfished," which means there are not enough fish in the sea. If overfishing occurs for too long, a stock will eventually become overfished.

New Tool for the 2020 Assessment

For the 2020 assessment, scientists at the Pacific Islands Fisheries Science Center in Honolulu used a new, cutting-edge assessment model named Stock Synthesis. This integrated all available data sources into a single statistical analysis of the uku population. The scientists used fish sizes, catch, and catch-per-unit-effort data from the commercial fishery extending all the way back to 1948. They also used recreational catch from the Hawaiʻi Marine Recreational Fishing Survey. Life history information such as growth rate, age at maturity, and lifespan showed that uku start reproducing at around age two. They reach their maximum length in around 10 years and can live up to 32 years. The model also used fish counts from diver surveys around all the main Hawaiian Islands, which provided a fishery-independent population abundance trend.

Uku (Aprion virescens) is a coastal snapper found throughout the Indo-Pacific, from the coast of Africa to Hawaiʻi. Photo: Smithsonian National Museum of Natural History.

Once they statistically fitted the synthesis model to this diverse data set, the scientists used it to determine the current condition of the stock. The model confirmed that the fisheries in the main Hawaiian Islands are not overfishing the uku stock and that it is not overfished. The model also allowed the scientists to consider annual catch limit scenarios for fisheries management. For example, the model estimated the Hawaiʻi uku population at slightly less than 4 million pounds. A constant annual harvest of about 300,000 pounds between 2021 and 2026 would result in a 50 percent chance of overfishing occurring in 2026.

The successful implementation of this integrated Stock Synthesis model in Hawaiʻi marks a milestone for us and for the conservation of marine resources in Hawaiʻi. The stock assessment report will now go to the Western Pacific Regional Fisheries Management Council for evaluation before it is used to inform fishery management decisions.