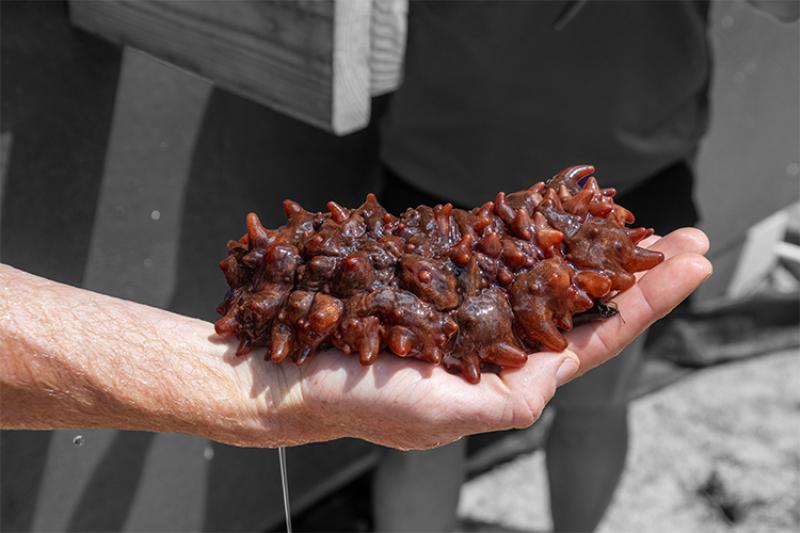 A crowd surrounds David Anderson as he reaches into the large bin’s water. He slowly pulls a fine mesh material out of the bin to reveal … nothing. He pulls out another section of the mesh, and there it is—a brown, pinkie-nail-sized, cylindrical blob. “It’s like a dark maggot,” an onlooker comments.

But this “dark maggot” is actually a baby loli (Hawaiian sea cucumber) whose potential belies its tiny size and appearance. Kauaʻi Sea Farms, in partnership with the Pacific American Foundation, is rearing sea cucumbers in a solar-powered hatchery at its Nomilo Loko Iʻa (Hawaiian fishpond). The goal of this NOAA grant–supported project: to cultivate loli as a high-value export product, primarily for Chinese and Japanese markets.

“And the animals consume the excess waste on the bottom of the pond that prevents [algae] from growing,” said Anderson, who is Kauaʻi Sea Farm’s production manager. “The sea cucumbers improve and increase the [plant-eating] fish that the pond can sustain.”

The project, the first of its kind in the state, is experimenting with raising three species of sea cucumbers that are native to Hawaiʻi:

The first phase of the project is hatchery production in tanks. “That’s where we’re producing juveniles up to 5 grams, which is an inch or two long,” Anderson explained. “From that point we are doing growth trials and conducting experiments in two fishponds and one commercial shrimp farm.” These growth trials will teach Anderson, fishpond managers, and other aquaculturists how well the sea cucumbers grow under different conditions and in different environments.

Anderson initially tried cultivating surf redfish and white teatfish in the hatchery, which are active in the daytime. These species are highly valued among Chinese nationals living in the United States, particularly for medicinal purposes. The sea cucumbers are typically dried and later rehydrated in a soup used to treat conditions such as fatigue, impotence, and joint pain.

Before Anderson could get through the first phase of the project, however, he ran into a major problem: bacterial infections in the cucumbers. The team changed a number of protocols to try to prevent the infections, including when and how much to feed the loli larvae. One thing that appeared to work was sterilizing the tanks and then adding in beneficial bacteria before putting in the loli.

Sea cucumbers go through a stressful growth period during which they transition from a free-swimming larva to something that more resembles a tiny sea cucumber. To do so, they must first find a surface to settle on—and it must have lots of food. Anderson initially had trouble growing the diatoms (single-celled algae) the larvae eat, but he succeeded after using different nutrient combinations.

Anderson had planned on having juvenile cucumbers ready for growth trials a year into the project, but the issues with surf redfish and white teatfish set him back. He and his team are now moving on to growing namako, a species popular in Japanese cuisine. They recently found these nocturnal cucumbers naturally living in the rockwall of the pond, suggesting it’s a good species to raise there.

If he’s able to get to the second phase of the project with namako, he’ll grow the loli in Nomilo in bags used for oyster aquaculture.

“Using oyster bags is one way to try to contain them in an area,” Anderson said. “The problem with namako is that they can melt their bodies and slide through cages.” That would make it very difficult to find loli when it comes time to harvest them.

Ultimately, the project could help revitalize Hawaiʻi fishponds and provide them with a new revenue stream.

“Sea cucumbers are a unique species to grow,” Spence said. “It's fascinating to see all the ways they can benefit the pond, including as a revenue stream that can support the pond's restoration.”

Many loko iʻa fell into disrepair after the Westernization of Hawaiʻi in the early 20th century. The sea cucumbers could help by becoming part of fishponds’ cleaning crew. Similar to the filter-feeding oysters used in some other ponds, sea cucumbers can improve the fishponds’ water quality. They consume organic waste and other solids that have settled at the bottom of the ponds. This would increase the number of fish that can thrive in the pond at once—a boon for ponds focused on producing fish.

The disrepair of Nomilo Loko Iʻa, which has been stewarded by the Hawaiian family Palama for more than a century, was due to an act of nature. In 1992, Hurricane Iniki struck, closing off the ponds’ seawater channels and disrupting the natural flow of nutrients and animals between the pond and ocean. Nomilo languished for more than 20 years until young family members began restoring the pond by clearing the waterways and removing invasive species such as mangroves.

Its waters once dominated by invasive tilapia, Nomilo now has a healthy variety of native fish:

For the past few years, Kauaʻi Sea Farm has also been growing hard-shell clams (Mercenaria mercenaria) in the pond and selling them to local businesses. The farm tried kicking off an oyster business, too, but an invasive parasite that infests oyster shells killed nearly all of the pond’s oysters.

If successful, the sea cucumbers will further restore the pond’s waters and supplement the clam project. As with the clams, Kauaʻi Sea Farm—and other fishponds—could sell namako to local businesses, particularly Japanese restaurants. The other loli species could be exported to the continental United States, reducing the country’s reliance on foreign sea cucumbers.

“This project is investing in an opportunity to use restorative aquaculture to produce a potentially high-value export product,” Anderson said. “And at the same time, it will restore the fishponds and increase the production of fish for the community.”

Not too shabby for a small “dark maggot.”