A growing network of fishpond practitioners and organizations from across ka paeʻāina o Hawaiʻi (the Hawaiian archipelago) are restoring the region's traditional aquaculture ponds. 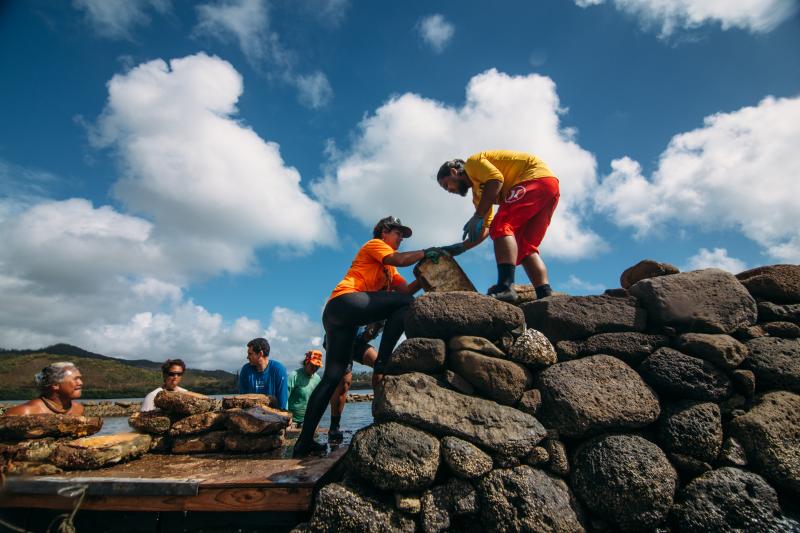 Community members come together to restore the walls of a traditional Hawaiian fishpond. Photo: Mark Holladay, courtesy of KUA.

Once, nearly 500 fishponds provided local Hawaiian communities with aquacultured seafood. Fishponds served as a unique part of an integrated agricultural and ecosystem management regime today known as the ahupua’a system. A societal move toward more centralized governance and economics, the overthrow and annexation of the Hawaiian government, time, natural disasters, development, and cultural-economic changes led to only four working fishponds by the dawn of the 21st century. These fishponds offer the opportunity to provide physical and cultural sustenance. An effort is underway to restore the pond structures and reconnect communities to their aquaculture past. KUA, an innovative community-based initiative, supports network efforts to build capacity to restore and care for these traditional fishponds.

“KUA means backbone, and the organization serves as the backbone that connects multiple communities working to restore Hawaiian bio-cultural resources, including efforts to restore fishponds,” said Kevin Chang, Executive Director of KUA. “The organization is about more than the physical restoration, it also connects our communities to each other, their history, cultural foundation, and future.” In a culture that honors sustainability, fishponds symbolized the connection between communities, the `aina (land), and moʻomeheu (culture).

KUA has a dedicated fishpond collective known as Hui Mālama Loko Iʻa, meaning network that cares for fishponds. It has worked since 2013 to foster fishpond restoration efforts. “Through our network we provide resources and in-person meetings that host two staff members from each fishpond site, that is about 80–120 people gathering annually to share lessons learned, opportunities, and research,” said Brenda Asuncion, Hui Mālama Loko Iʻa Coordinator.

“Today we have around 40 fishpond sites across the islands in different stages of restoration,” added Asuncion. “There are no site standards or requirements for the Hui; each site has different goals according to their watershed and community structure.”

Restoration Through Old and New Technologies

To restore and improve fishponds, Hawaiian aquaculture practitioners are combining contemporary science with traditional practices and knowledge to adapt to today’s sustainability challenges. Restoration of neglected sites still involves communities lending a hand and sometimes leading efforts. “Building pond walls today, much like it did hundreds of years ago, still involves community members coming together to remove sediment and constructing rock walls by hand,” said Asuncion. She notes they are also a common site for modern research with agencies and organizations studying environmental conditions like water quality, climate impacts, and chemistry in the fishponds.

Since the very first fishponds, the structures have been designed to recruit smaller fish to enter the ponds through a weir-type structure. These weirs are usually an opening in the rock walls covered by stick grates to allow smaller fish to enter the ponds. Once in the pond fish feed on the site’s rich vegetation until they reach harvest size. As the environments around the fishpond sites have also changed, getting smaller juvenile fish to enter the pond can be difficult. This is where contemporary science can offer a solution, exploring the idea of partnering with hatcheries or labs to stock native fingerlings.

Nutritional Relevance Then and Now

A historic quote attributed to Samuel Manaiakalani Kamakau described fishponds as, “things that beautified the land, and a land with many fishponds was called a ‘fat’ land.” While the exact date of the individual fishpond constructions is unknown, Hawaiians typically built many of their ponds between the years 1200 and 1600. The age of these builds can lead many to think of the sites as relics of a past time. However, restored ponds are as socially, economically, and environmentally important today as they were 800 years ago.

Just as in centuries past, island residents worry about food security due to their isolation in the Pacific Ocean. “We are located 2,500 miles from the mainland United States, this means our dependence on food imports is high,” said Chang. In fact, nearly 90 percent of Hawaii's food is imported, making it particularly vulnerable to global events that might disrupt shipping and food supplies. “These fishponds were a technology used to leverage the commons to feed the people, but today we also see their potential to restore our commons for the people,” added Chang.

These traditional fishponds offer a sustainable way to increase access to local food year round. The ponds also offer community-based economic development opportunities for sites to sell their aquacultured seafood. This would allow fishpond organizations to keep money in the local community and to fund education and outreach activities at the ponds.

Vision for the Future

Through KUA, the Hui Mālama Loko Iʻa community will continue to support fishponds so that their work and their individual destinies are self-determined. Along with providing sustainable food and economic opportunities, Asuncion and Chang hope these ponds can also restore a sense of place-based management and a relationship with the land.

Last updated by Office of Aquaculture on July 06, 2021