How an Odd, Cannibalistic Fish Is Helping Us Understand the Mysteries of the Deep

Scientists are using lancetfish stomachs to learn more about the middle of the marine food web, as well as marine debris. 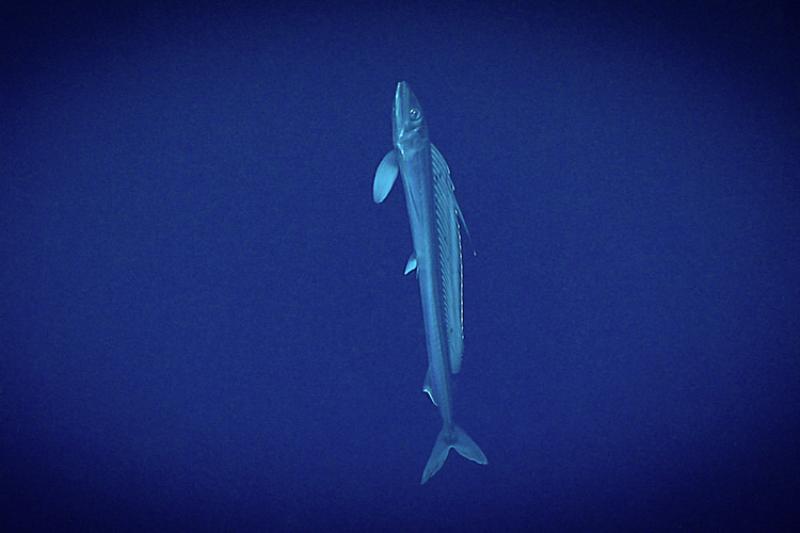 Scientists are using lancetfish's unusual stomachs, which contain barely digested food items, to learn more about the creatures that make up the middle of the marine food web and about the pervasiveness of plastics in the ocean. Video produced by Joseph Bennington-Castro.

With its wide mouth filled with dagger-like teeth, spiny sail fin reminiscent of some dinosaurs, and long, slender body extending up to 2 meters (6.6 feet), the lancetfish doesn't look like a creature that anyone would want to tangle with. Yet, fishermen sometimes catch more lancetfish than the bigeye tuna or swordfish they’re actually targeting.

On the surface, these prehistoric-looking fish don’t appear to have much value. They're not very tasty and their gelatinous flesh is unsuited for local cuisine. And their preferred habitat — the dark depths of the ocean — and potential size preclude them from aquariums. As such, fishermen typically don’t keep the lancetfish they catch.

But researchers at the NOAA Pacific Islands Fisheries Science Center (PIFSC), along with their collaborators at the Monterey Bay Aquarium Research Institute, Stanford University, University of Hawaiʻi, and NOAA Pacific Islands Regional Office (PIRO), have found a special purpose for the seemingly worthless lancetfish catch: As unique tools to better understand the middle of the marine food web.

"When we look in lancetfish stomachs, their prey is really undigested," says PIFSC research oceanographer Phoebe Woodworth-Jefcoats. "They look almost exactly like the fish you would see swimming around in the ocean."

By studying the stomach contents of lancetfish, Woodworth-Jefcoats and her colleagues get an unprecedented glimpse into the ecosystem, helping them understand, for example, what the fish on our plates (tuna, swordfish, and others) are eating.

Tracking these marine diets over the years will further reveal how the marine food web is changing over time (if at all) and how the big inter-annual climate variability events like El Niño or La Niña — as well as rising ocean temperatures and ocean acidification — affect the food web.

At the base of the marine food web are phytoplankton, photosynthetic microorganisms that are similar to terrestrial plants in that they contain chrolophyll and require sunlight to live and grow. Because these organisms need sunlight, they live in mass on or near the surface of the ocean and scientists can therefore readily study them with satellite imagery, Woodworth-Jefcoats says.

At the other end of the spectrum are the big fish, mammals, and other animals of the ocean. Researchers learn a lot about these apex predators through observational studies and, in the case of the big fish, through the fisheries.

"But then there's this huge section of the food web in the middle," Woodworth-Jefcoats says. It's made up of so-called micronekton, which are freely swimming fish, crustaceans, cephalopods, and jellies that are no more than 20 cm (about 8 inches) in length. "All of that stuff is really hard to capture when we do research trawls through the midwater column." 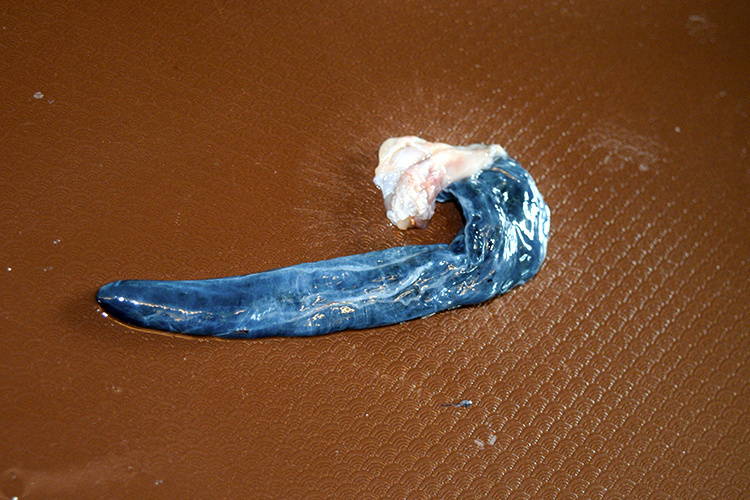 PIFSC scientists learned they could use lancetfish diets to study the middle of the food web through the work of Anela Choy, an oceanographer with the Monterey Bay Aquarium Research Institute (MBARI). While studying at the University of Hawaiʻi with oceanographer Jeff Drazen, Choy conducted doctoral research in which she looked at the diets of a handful of large fish that live in the twilight (mesopelagic) zone of the ocean, including lancetfish, opah (moonfish), and a few other species, and compared them to the diets of commercially important tuna and swordfish.

Choy later took a short post-doc position with PIFSC, folding her diet research into the program. Given that the digestive physiology of the lancetfish made their prey the easiest to identify, the researchers focused their attention on these unusual fish, which allow them to study the micronekton communities of the North Pacific like never before, Woodworth-Jefcoats says.

To get lancetfish specimens, the researchers have enlisted the help of PIRO observers who are routinely onboard longline vessels to document commercial fishermen's catch and the crews' activities. With these specimens, they're trying to acquire some basic science information about these crypic fish, such as their distribution, growth rate, and digestive processes.

There are two known species of lancetfish, which are found throughout the world's oceans save for the polar seas: the long-snouted lancetfish (Alepisaurus ferox) and the short-snouted lancetfish (Alepisaurus brevirostris). Until recently, scientists thought that the only species found in the North Pacific is the long-nose variety; oddly, however, the lancetfish caught in Hawaiʻi come in two distinct sizes, suggesting fishermen were catching two different species. 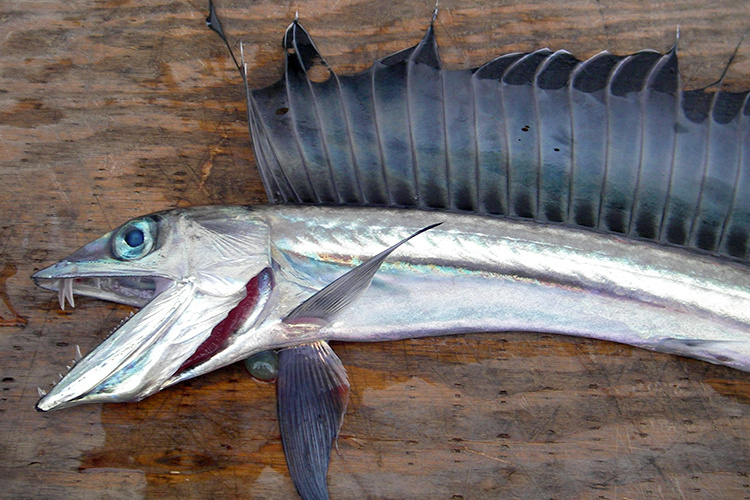 Lancetfish are frequently caught unintentionally on longlines in the North Pacific.

But all of the lancetfish that Woodworth-Jefcoats and her colleagues have examined so far were A. ferox, and Stanford collaborator Elan Portner came up with a theory about what's going on.

"The way fish populations generally work is that you have a whole lot of small fish and not a lot of big fish, and the fishing gear is designed to catch the big fish," Woodworth-Jefcoats explains. "So, we think that we catch a lot in the smaller size class just because there are a lot more of those, and we catch a lot in the larger size class because that's what the gear is designed to catch."

The researchers identify the lancetfish species through careful examination and measurements, but they are also taking white muscle samples to eventually do DNA work. Additionally, they are collecting the otoliths (ear bones) from the lancetfish, which allows them to age the fish and determine how quickly they grow — basic information that's known for tuna, mahimahi, and numerous other types of fish but is lacking for lancetfish.

So far, the team continues to process lancetfish and hope to analyze all of their data in the coming months. The diet research, on the other hand, is ongoing, with some interesting finds.

For instance, they’ve found plastic in lancetfish stomachs — and lots of it, including everything from plastic bags, to twine, to hair clips, to straws, to bottles. Furthermore, in a study on the frequency and composition of ingested plastic by lancetfish, PIRO researcher Lesley Hawn found that nearly a quarter of lancetfish sampled ingested plastic, primarily in the form of plastic fragments. 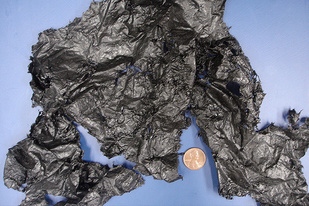 A large piece of a black plastic bag retrieved from a lancetfish’s stomach. With a total silhouette area of about 51,000 square millimeters, the bag is roughly the size of a kitchen towel.

“We categorized the plastics by physical characteristics and measured the silhouette area of each piece using image analysis software,” Hawn says. “One interesting discovery was a large piece of a black plastic bag that was roughly the size of a kitchen towel!”

While plastic debris is often thought of as something that sits on the surface of the water, the samples found in the guts suggests plastic debris actually exists throughout the water column. 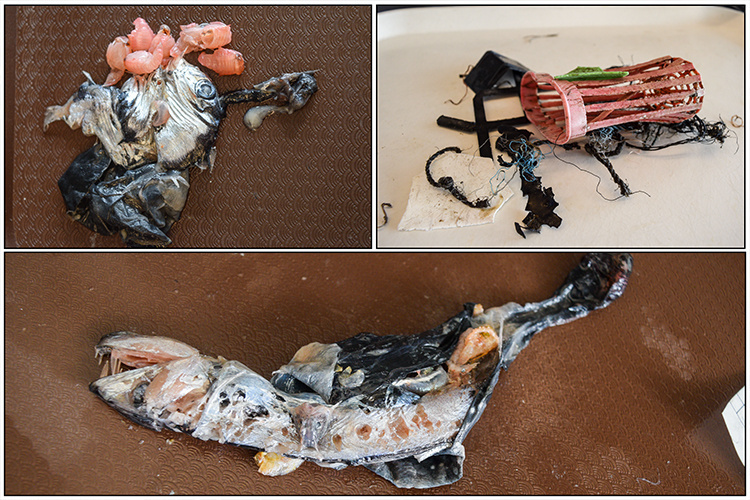 Overall, however, preliminary results showed that A. ferox has a diverse appetite that spans 97 prey families, many of which are not well known. The lancetfish's unique digestive physiology allows the team to identify some of the species upon close inspection, though others require DNA analyses.

Comparing these prey items with those caught in research trawls will paint a more complete picture of the middle of the food web.

More research may also elucidate how, exactly, lancetfish get the nutrition they need despite their stomach contents being largely undigested. One theory suggests lancetfish eat whenever they come across food and only digest their prey when necessary.

"It's interesting that we catch a lot of these fish that we don't know much about because people don't eat them," Woodworth-Jefcoats says. "And I think it's exciting that we're still learning really basic science information about the marine food web and the ocean."