Learn how scientists are using underwater cameras to monitor the Hawai‘i Deep 7 bottomfish. 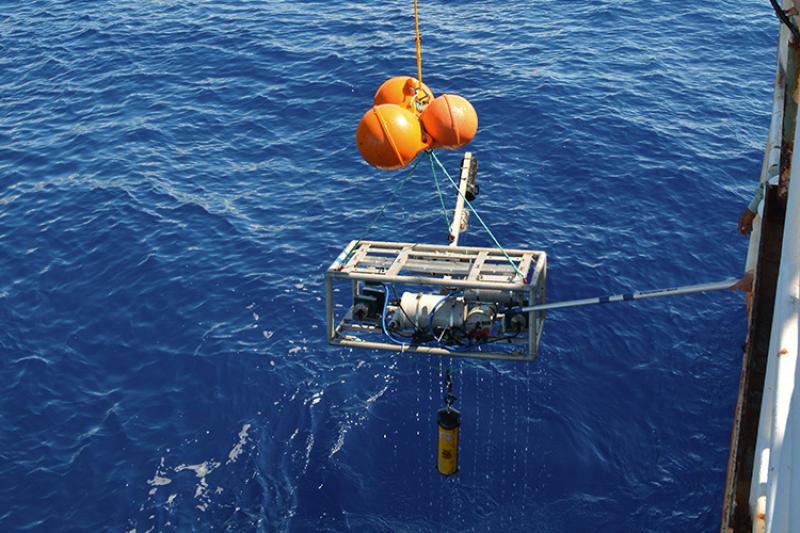 The 2015 hurricane season left a noticeable impression in the record books, thanks in large part to warm waters precipitated by strong El Niño conditions. In all, the Central Pacific region saw 15 storms between the middle of May and the end of November—four storms more than the previous record set in 1992 and 1994. 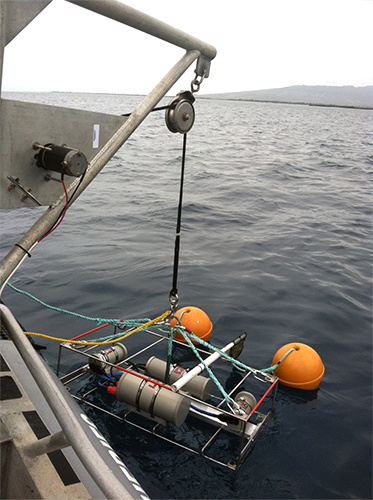 But as we journeyed around in the Maui Triangle—the aqueous area between the islands of Lāna‘i, Kaho‘olawe, and Maui in Hawai‘i—in late October, it was difficult to imagine that the Hawaiian Islands saw anything resembling rough conditions in recent months.

The sky was clear, with the only clouds in sight looming over the islands in the distance; the water was a deep, monotonous blue, lacking strong waves; and the wind was normally calm and rarely threatened the hats atop the heads of the crew of the NOAA Ship Hi‘ialakai.

The weather was, for all intents and purposes, perfect — just what the scientists from the Pacific Islands Fisheries Science Center needed to test out their underwater camera systems designed to study the commercially valuable bottomfish living in the near-shore fisheries around Hawai‘i.

"It's been pretty good, all in all," Russell Reardon, project leader for the scientific operations occurring on the trip, tells me on the deck of the Hi‘ialakai as we watch the crew prep the cameras for deployment off the side of the 224-foot-long ship. "Not as good as we'd hoped, but we learned a lot."

To ensure that the Deep 7 are available for all to enjoy in the future, NOAA Fisheries sets quotas, or annual catch limits (ACLs), for the bottomfish conglomerate, as recommended by the Western Pacific Fishery Management Council, which is responsible for managing the offshore fisheries in the area.

Once fishermen reach this quota, the State of Hawai‘i closes its bottomfish-containing fisheries, preventing people from overfishing the Deep 7.

"The ACLs are all based on the stock assessments that we do for the bottomfish species," says NOAA biologist Ben Richards, who was the science advisor on the Hi‘ialakai trip. "And those [stock assessments] right now rely solely on fishery-dependent catch data."

That is to say, to get a proxy for the abundance of the Deep 7, NOAA Fisheries uses a metric called "catch per unit of effort" (CPUE), a kind of catch rate that's based on fish data from commercial fishermen, as well as data from commercial buyers. Though this metric allows researchers to glean information about the likely abundance trends of the bottomfish, it's not a true assessment of population health and can be easily biased.

For instance, Richards explains, if you have a CPUE of 10 for a given area at a given time and a CPUE of 5 for another area at a different time, you assume that the first place simply has more fish at that time—but this isn't necessarily true.

"Maybe the market price has changed for a species between the time periods and fishermen aren't targeting certain fish anymore," Richards says. "Or there's a change in the weather that makes it harder to fish, or a spawning event that causes a short-term increase in catch in that area. Those things can bias the catch data so that it differs from the true abundance."

Fishery-independent data—information that isn't influenced by market forces and which can be collected in a standardized manner, such as data from fish counts using cooperative research fishing with the local community or underwater cameras—could help NOAA Fisheries scientists determine if what they think they know about the abundance of the Deep 7 is correct, Richards notes.

The Gears of Stock Assessments

In 2011, Richards, along with science center colleagues, the Pacific Islands Fisheries Group, University of Miami Rosenstiel School for Marine and Atmospheric Science, and University of Hawai‘i Joint Institute for Marine and Atmospheric Research and the School of Ocean and Earth Science and Technology, launched a project to develop a fishery-independent survey for the Deep 7.

For the project, they began by investigating four gears, or technologies, each of which has its own strengths and weaknesses: cooperative-research fishing, stationary stereo-video, mobile stereo-video, and EK60 active acoustics.

"Our hope is that by using multiple gear types we can balance the strengths and weakness of them," Richards explains. 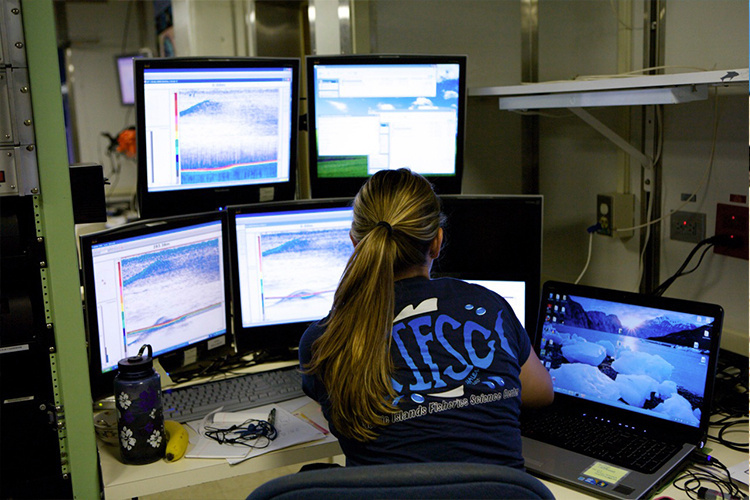 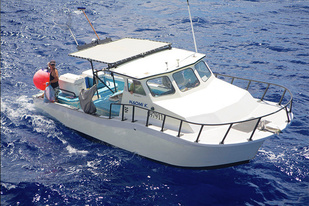 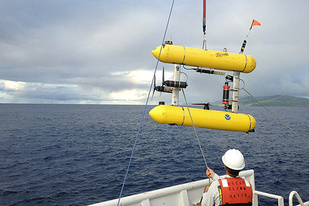 Unlike current bottomfish stock assessments, cooperative-research fishing uses standardized survey methods. Commercial fishermen—subcontracted by the PIFG—fish following a rigid experimental design, in which they fish for the same amount of time (30 minutes per area) using the same gear (two lines, each with four hooks) and bait (squid for one line and anchovies for the other).

The resulting catch data allows for a more accurate representation of the number of fish in a given area, but this gear can still miss any fish that just aren't biting.

The stationary stereo-video gear uses underwater cameras shooting at about 30 frames per second to sample the sea floor for 15 minutes per area. After scientists retrieve the system, which is baited with squid and anchovy to orient fish in front of the cameras, they use computer software to review the recordings and help them count and measure the size (and therefore approximate weight) of bottomfish.

Though the stationary video gear allows us to estimate the size structure of the population and how many bottomfish may be available in the future, it only samples fish at a single depth (missing the fish at other depths) and requires technicians to review the video recordings—a very time-consuming process.

The mobile stereo-video gear uses a SeaBED automonous underwater vehicle (AUV), which has the same camera system as its stationary cousin. Unlike the stationary video technology, however, SeaBED can record bottomfish at multiple depths across a large swath of water and can cover different habitat types within a single dive.

But AUV gear also has several important drawbacks, such as having very high costs and the potential to attract or scare away certain fish.

But while the technology can cover a huge range and estimate fish biomass (the total mass of fish in a given volume), it's unable to distinguish between similar fish species or provide accurate length data.

After four years of testing out the gears, the research team is now moving on to conduct more surveys with only the first two gear types—which is where the Hi‘ialakai came in.

Till now, the stationary stereo-video gear deployed for bottomfish research has been the Bottom Camera Bait Station, or BotCam, which researchers at the science center originally developed 10 years ago. Since then, scientists with PIFSC and the University of Hawai‘i at Mānoa have extensively used BotCam to study bottomfish around the Hawaiian Islands.

Richards and others recently developed the next generation BotCam called Modular Optical Underwater Survey System (MOUSS), which multiple NOAA Fisheries science centers are already using in their research. "What we did in evolving from the BotCam to the MOUSS was we shrunk the size and we shrunk the weight," Richards says.

The reason for designing a smaller camera rig, Richards explains, is that BotCam could only be deployed by large vessels with a hydraulic crane. "We knew that when we were going into the fishery-independent survey, we'd need to deploy it off of smaller vessels," he says.

One of the main objectives for the Hi‘ialakai trip, Richards notes, was to conduct the first real operational-level deployment of the MOUSS system. On October 15, 2015, Hi‘ialakai and its crew departed Pearl Harbor, O‘ahu for the Maui Triangle.

During the 11-day expedition, crew aboard two 19-foot survey vessels launched MOUSS 176 times. Rather than use a heavy hydraulic system, these vessels have a davit and pinch puller with an electric motor connected to a gear box; a connected wheel pulls on a line attached to the MOUSS frame, allowing the line to lower and raise MOUSS in and out of the water.

"The gear ratio determines how easy and fast it was to pull up the MOUSS," Richards says, adding that the team initially had the system geared too high, causing it to trip the circuit breakers.

"It could hold the weight no problem, but the drag you get pulling [MOUSS] out of the water is kind of a guess with what the appropriate gear ratio should be," Reardon explains. "So what we found is that we probably need to gear it down a bit so that it pulls slower. It's like it is in your car—it won't go as fast but it'll have more torque to it."

"Importantly, these crucial deployments allowed the scientists to develop a standard operating procedure for the best way to deploy and recover MOUSS in future bottomfish surveys," Richards says.

Stock Assessments of the Future

A higher frame rate produces a smoother video and has more still images, increasing the chance of getting an image that shows fish in just the right orientation to accurately measure their size. On the flip side, however, a higher frame rate also equals more data to download, transmit, process, and store—ultimately increasing time and financial costs.

"We're trying to find that sweet spot," Richards says. "What is the lowest frame rate that we can get the information we need while minimizing the download time, storage space, and recording errors?"

To get this information, the team mounted the BotCam and MOUSS cameras, pointed in the same direction, onto a so-called "Frankenframe" and lowered the system into the depths of the Maui Triangle, about 100 meters below the Hi‘ialakai. Throughout the expedition, they conducted 31 Frankenframe drops, using various frame rates for the MOUSS cameras. 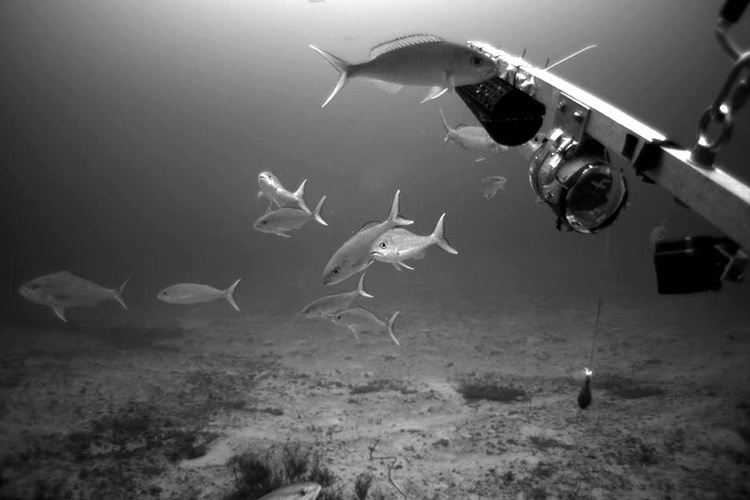 A school of opakapaka, as captured by the Modular Optical Underwater Survey System (MOUSS) during the Hi‘ialakai trip.

The researchers are now reviewing all of the data.

"It's probably going to take us 3 to 4 months just to go through all of the video and compare the camera systems and the frame rates and everything like that," says Chris Demarke, a science operations logistics leader who helped deploy MOUSS from one of the small boats and is a part of the team reviewing the videos. "Watching the videos is a rather time-consuming process."

In the near future, Richards hopes to significantly speed up this data analysis procedure by automating part of it. To that end, he has taken the helm of the NOAA Fisheries Strategic Initiative on Automated Image Analysis, which is composed of governmental, academic, and private industry representatives, including experts from the NOAA Fisheries science centers, Google, Dropbox, and the University of Victoria, among other entities. Also on board are several contractors who have developed similar image analysis technologies for the Department of Defense.

"Since all of that work was developed for the government, we are freely able to make use of all of the non-classified information," Richards says. "It's really encouraging to see some of that work spilling over into non-defense related areas of research."

The simplest approach would be to develop algorithms that scan videos for frames with fish in them—Demarke and other analysts could then focus on conducting species counts and length measurements for just these images. Down the line, the group could further aid Deep 7 stock assessments by developing technologies that take on these tasks as well, leaving the analysts to just double-check the data where the computer algorithm has the lowest confidence of being correct.

"In doing stock assessments, what we're trying to do is ensure the long-term sustainable use of resources," Richards says. "We have fish now, and we want to make sure the amount of fish we're catching now allows us to catch fish in the foreseeable future."