Restoring habitat connectivity is the key to helping diadromous fish populations reach their full potential and continue to support a healthy coastal ecosystem. 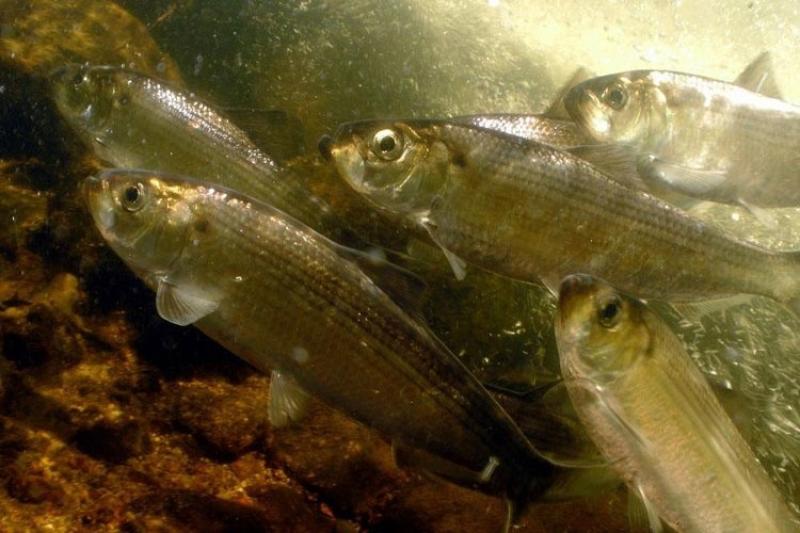 New England is known for its thousands of miles of rivers and streams, many of them dotted with historic mills and dams. Those dams make it difficult for fish to reach upstream spawning habitat, which causes their populations to shrink. NOAA Fisheries is working with partners to address or remove those dams, giving fish a chance to rebound.

Diadromous fish are a special group of fish that have the ability to migrate between the ocean and freshwater. Well-known diadromous fish—such as shad, river herring, salmon and eels—serve several vital ecosystem functions throughout their life cycle. During spawning migrations, they provide a seasonal abundance of food for species living year round in marine, freshwater, and transitional habitats. Different species complete migrations throughout the year.

For the Merrimack River in New England, the largest number of adult shad and river herring comes to the river during the spring. This timing is important for fish-eating predators such as eagles, ospreys, otters, and many others who often rely on these fish to feed their own young. When the young fish and surviving adults swim back to the ocean, they play a crucial role in the marine food web as both predator and prey.

Diadromous fish also transport nutrients from the ocean to inland ecosystems. Just like the water cycle transports moisture from the ocean back to land through evaporation and precipitation, these fish bring abundant nutrients upriver. This is one of the few pathways by which nutrients can travel against the flow of rivers to the sea. 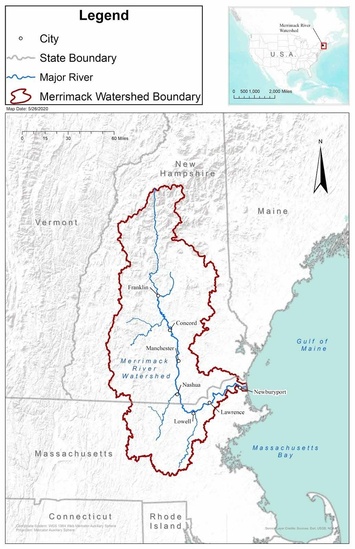 Map of the Merrimack River Watershed showing the mainstem, major tributaries, and associated cities in New Hampshire and Massachusetts

Are You Going to Eat That?

Prior to European colonization of New England, the Merrimack River and tributaries supported staggering populations of diadromous fish. The American shad run was particularly impressive. One historical account from Amoskeag Falls on the Merrimack River describes shad “so thick … you could not put in your hand without touching some of them.” These large numbers of fish travelling inland, some as far as several hundred miles, provided fisheries for Native Americans. Later, they supported the first Colonial settlers to the region. Fish preserved with salt provided nutrients when other food was scarce during the harsh New England winters.

People were so reliant upon the seasonal abundance of river herring, shad, and salmon that preserved fish became a form of currency used for trading and settling debts. Through the early 1700s, fish migrations were a much-anticipated annual celebration. Many farmers traded their hoes and scythes for hooks and nets. Despite heavy fishing, it seemed as though this resource could not be depleted.

What Did the Fish Say When it Ran Into the Wall? “Dam.”

As the Industrial Revolution began in America in the late 1700s and early 1800s, the Merrimack River watershed saw the construction of many dams. Spurred by the need for power to drive the belts, gears, and wheels of industry, dams became a widespread and common sight. By the mid-1800s, developers had erected several dams on the Merrimack River.

In the midst of all of this construction and industrial progress, people began to notice something was missing. Unable to access many of their historic spawning grounds to reproduce, stocks of salmon, shad, and river herring dwindled. Construction of The Great Stone Dam concluded in 1848, creating a complete barrier for fish just 30 miles from the Atlantic Ocean in Lawrence, Massachusetts. This dam cut off access to more than 95 percent of historic diadromous fish habitat, effectively eliminating Atlantic salmon from the watershed by 1850. Shad and river herring populations were also heavily impacted, but were able to avoid a complete population collapse. This was due to their ability to spawn in a few small tributaries and areas of the river below the Great Stone Dam. Nevertheless, from an ecological standpoint, the historic runs of fish that had once existed in the Merrimack River were gone.

By the 1860s, resource managers decided to act in an attempt to restore these fish. By 1866, they began building the first “fishways”—structures such as fish ladders that allow fish to pass over a dam or other obstruction. These efforts helped to avoid a complete collapse of the diadromous fish runs. However, despite these efforts, over the next 150 years numbers of returning adult fish would not approach anywhere near their historic abundance. To make matters worse, reckless industrial waste practices were widespread during this time. These actions degraded water quality and polluted fish habitat, making restoration even more challenging. With the passing of the Clean Water Act in 1972, water quality began to improve.

Where Do We Go from Here?

Today, with more than 3,000 barriers in the watershed, habitat connectivity remains the biggest challenge facing the restoration of diadromous fish. Many of the large dams that originally provided power for mills have since been fitted with powerhouses containing modern turbines that generate clean energy. We want  to balance the restoration of diadromous fish with the need for sustainable energy production. NOAA Fisheries and our partner agencies engage with dam owners to ensure effective fish passage is maintained at these facilities. 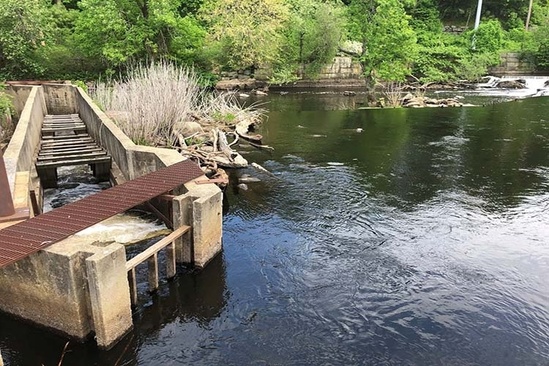 Centennial Island Dam fish ladder on the Concord River - a major tributary of the Merrimack.

Fish passage facilities are now in place at the first three dams on the Merrimack, as well as dams on several major tributaries including the Nashua and Concord Rivers. We also work with owners of inactive dams to remove them where possible. Through this process, we have removed several dams—opening up dozens of miles of diadromous fish habitat that had been inaccessible for more than 200 years.

Although there is more to do, all of these efforts have resulted in greatly improved abundance for shad and river herring. There was a return of almost 450,000 adult river herring in 2018, one of the best recorded in recent years. We continue to focus on restoring habitat connectivity and helping diadromous fish populations reach their full potential, enhancing biological integrity, and supporting a healthy coastal ecosystem.