Every year, millions of fish migrate to their native habitats to reproduce. They are often blocked from completing their journey. When fish can’t reach their habitat, they can’t grow their populations.

Why Fish Migration Is Important

Every year, millions of fish—salmon, steelhead trout, shad, alewives, and sturgeon, among others—migrate to their spawning and rearing habitats to reproduce. Some fish need to swim thousands of miles through oceans and rivers to reach these freshwater destinations. They are often blocked from completing their journey by human-made barriers, such as dams and culverts. 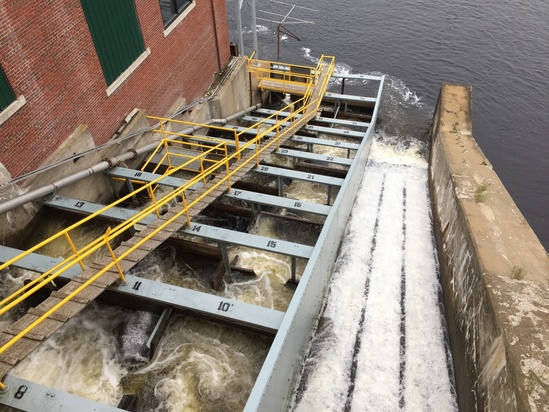 When fish can’t reach their habitat, they can’t reproduce and maintain or grow their populations. Fish passage is important for the protection and restoration of migrating fish and their habitats. NOAA Fisheries restores, opens, and maintains habitat for fish by removing or finding ways around barriers to fish passage and improving in-stream, floodplain, and marsh conditions. This helps recover threatened and endangered migratory fish and support the sustainability of economically important commercial and recreational fisheries.

Common types of barriers to fish migration are dams and culverts. Although some dams may provide benefits, such as hydroelectric power and irrigation, they can also block access to fish habitats. Some of these dams have fallen into disrepair and are now considered hazardous, or are no longer in use or serve any functional purpose. 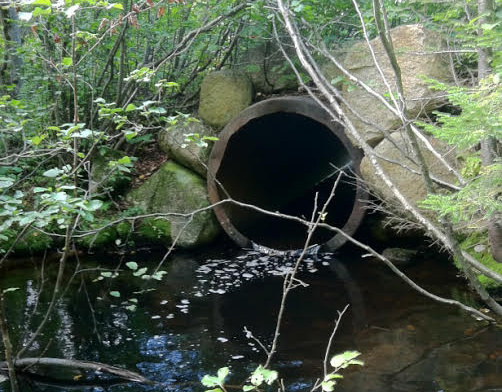 A perched culvert is difficult for some fish to reach when the water level varies.

Hydropower dams use the energy of river water spilling down the height of a dam to power turbines, which generate electricity. These dams can also prevent adult fish from swimming upstream and injure or kill juvenile fish trying to swim downstream.

Culverts (tunnels that carry a stream under a road) can also be barriers to fish migration when they are too small or steep or are perched too high to allow fish to pass.

In the United States, it is estimated that more than 2 million dams and even more culverts and other barriers block fish from migrating upstream. This has contributed to the decline of many fish populations.

For example, Atlantic salmon used to be found in almost every large river north of the Hudson River. Due to dams and other threats, less than half of 1 percent of the historic population remains. The last remnant populations of Atlantic salmon in U.S. waters exist in just a few rivers and streams in central and eastern Maine. They are now an endangered species and are protected under the Endangered Species Act to help the population recover. 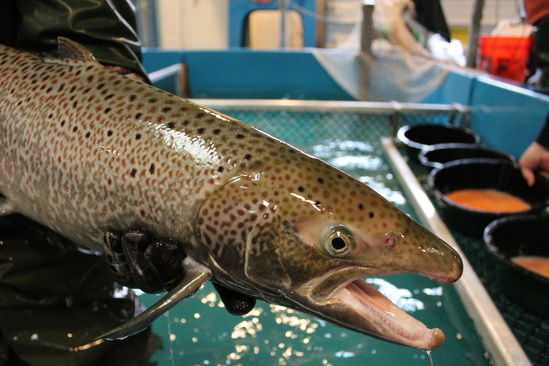 Reduced fish populations affect the entire ecosystem, because they are often important prey for other animals. They are often crucial to commercial and recreational fisheries, so reduced numbers can affect local economies as well.

What NOAA Fisheries Is Doing to Improve Fish Migration

NOAA Fisheries works to protect and restore river habitat through a variety of programs and partnerships. We work with conservation organizations, energy companies, states, tribes, and citizens to evaluate the best option for each barrier. We understand that most barriers have the same general impact on fish—blocking their migration—but each requires a specific set of conservation actions. 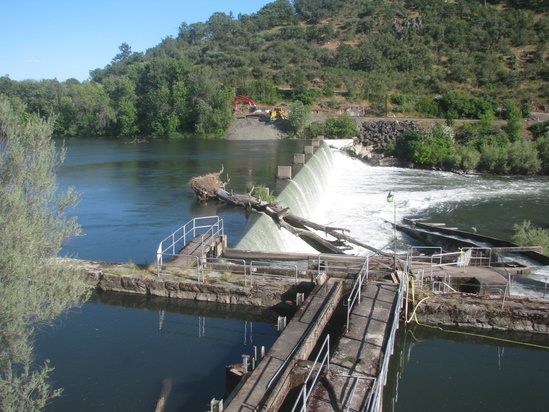 In cases where there is support for removal and where barriers are no longer serving their intended purpose, we open rivers and streams for fish by completely removing barriers. This can mean working with local partners in removing them with heavy equipment like bulldozers and excavators, or even blasting them away with dynamite. Sometimes—with hydroelectric or other dams—we can’t remove the barriers, so we help fish swim around them instead. We also enlarge culverts to allow a more natural flow of water for fish to swim through. Our efforts ensure that passage for fish is safe, timely, and effective.

Hydropower dams can affect habitat and marine resources. We work with partners—including other federal agencies, industry, states, non-governmental organizations, and tribes—to identify and implement solutions to reopen rivers to migratory fish while aiming to preserve hydropower generation. These facilities generally operate under a license from the Federal Energy Regulatory Commission. These licenses typically last decades—30 to 50 years. When licenses need to be renewed, we have an opportunity to review how the power plant operates and make suggestions for improving fish migration. 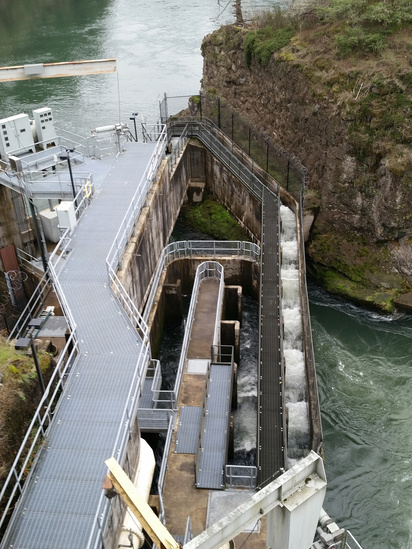 We review information about the facility’s operations and evaluate project impacts on migratory fish and their habitat. We can require improved fish passage to ensure the safe, timely, and effective upstream and downstream passage of migrating fish, and recommend conditions to the license that will protect or improve habitat and fish populations.

After a license is issued, we work closely with the hydropower companies to monitor the progress of fish migration at these facilities.

With the input, expertise, and support of our partners, we have conducted more than 600 fish migration projects, including dam removals and hydropower facility updates. Together, these projects have opened almost 6,000 miles of rivers and streams for fish migration. 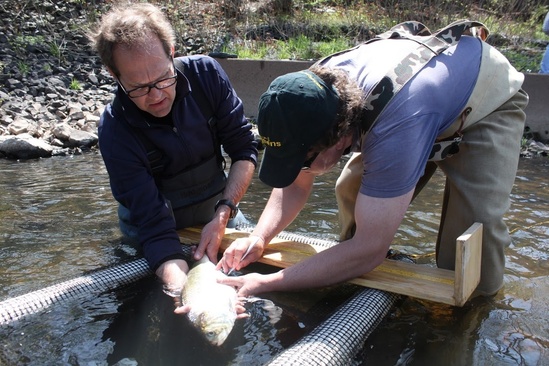 Fishing is an important economic sector in the United States. In 2017, commercial and recreational fishing industries supported 1.74 million jobs, and the U.S. economy generated $244.1 billion in sales from U.S. businesses in the commercial and recreational fishing industries. Many migratory fish, such as shad and river herring, are food for valuable commercial and recreational species, including striped bass and cod. When barriers block their migration, populations of these important migratory fish can decline, which can affect local economies and fishing opportunities supported by these species. Our efforts to improve fish passage can help these populations recover. Read more about how our economy depends on rivers.

Thousands of dams have been constructed in the Northeast since colonial times, ranging from small farmer's ponds and mill dams to small and large hydropower dams. Our efforts support species like Atlantic salmon, river herring, American shad, and Atlantic sturgeon. 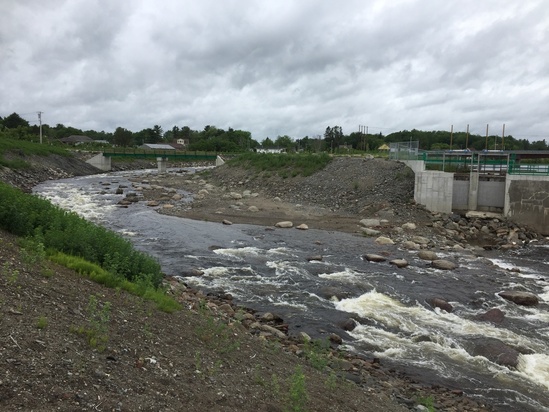 Our efforts support species like American shad, river herring, Atlantic sturgeon, and American eels. One example of our collaborative efforts is the Cape Fear Partnership, which uses a holistic watershed approach to support migratory fish. In addition to addressing fish passage, the approach incorporates important water quality and habitat needs.

In Alaska, we focus on preventing impacts to habitat for Pacific salmon and steelhead amidst development of new hydropower projects. Alaska has robust fish stocks, a variety of marine mammals, and the potential for new hydropower development.

Last updated by Office of Habitat Conservation on 05/03/2022