The Cape Fear River Partnership is a group of key federal, state, local, academic, and other organizations in the region working together on a multi-year action plan to improve the Cape Fear River in North Carolina. Using a broad range of tools and capabilities, we seek to provide long-term, habitat-based solutions for the most pressing challenges for migratory fish.

A Watershed In Need

At more than 9,000 square miles, the Cape Fear River basin is one of the largest watersheds in North Carolina, stretching from the Atlantic Ocean past Greensboro. Poor habitat quality in rivers and streams threatens fish, such as American shad, striped bass, river herring, and endangered Atlantic and shortnose sturgeon populations. Dams and other blockages prevent fish such as these from migrating upstream to reproduce.

Improving habitat conditions in the Cape Fear River will benefit more than the important migratory fish species in the basin.It will also benefit the communities that depend on the river for its abundant water supply and rich recreational opportunities. Many North Carolina communities and businesses depend on the Cape Fear for water. In 2010, more than 33,000 people in North Carolina were employed in the tourism and recreation industry, with wages totaling almost $500 million. And North Carolina anglers spent more than $1.5 billion in 2011 on fishing-related activities.

The Story of NOAA in the Cape Fear River Basin

Take a look at our interactive story to find out about: 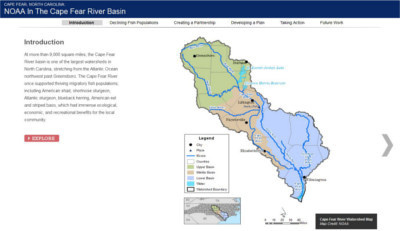 NOAA will continue to participate in partnership efforts to reach out to the broader community while continuing to implement the suite of actions described in the newly released plan. NOAA is committed to improving fish passage, fish habitat, and socioeconomic outcomes throughout the Cape Fear River Basin.

Last updated by Office of Habitat Conservation on 12/13/2017