Opening rivers for fish and communities

Salmon and other migrating fish, such as shad, alewives and sturgeon, need access to freshwater habitat for spawning and rearing. Sometimes, they need to swim thousands of miles through oceans and rivers to reach their destination, but they are often blocked from completing their journey by dams and culverts. We are leading the charge to open our nation’s rivers and streams by providing fish passage solutions for these barriers.

Fish passage is important to the protection and restoration of fish and their habitats. NOAA works with conservation organizations, energy companies, states, tribes, and citizens to evaluate barriers—big and small—to improve fish passage. Most barriers have the same general impact on fish—blocking migrations—but each requires a specific set of conservation actions.

Through multiple programs and partnerships, we’ve opened rivers and streams for fish and hundreds of other species by completely removing fish passage barriers. Additionally, our Hydropower Program provides solutions for fish passage around hydroelectric dams. Together, NOAA programs have opened thousands of river miles with benefits to riverine, coastal, and marine ecosystems.

Reopening the Penobscot River after more than a century 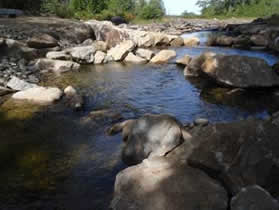 The Penobscot River in Maine is home to eleven migratory fish species, including three listed under the Endangered Species Act. The river also hosts the largest run of Atlantic salmon left in the United States. But dams, barriers, overharvest, and water pollution have severely reduced numbers of many migratory fish in the watershed.

NOAA worked with the Penobscot Indian Nation, the landowners of this area, and other partners to remove dams at South and East Branch Lakes and replace them with nature-like fishways. The completion of this project opened more than 3,100 acres and 30 miles of spawning habitat for sea-run fish including alewife, American eel, and Atlantic salmon, a NOAA Species in the Spotlight. Both sites are expected to become venues for tribal cultural events.Endangered shortnose sturgeon, often called “living fossils," regained access to habitat in the Penobscot River that had been blocked by dams for more than 100 years. NOAA worked collaboratively with the Penobscot River Restoration Project and the Penobscot Habitat Focus Area to remove the Veazie and Great Works Dams, restoring 100 percent of historic sturgeon habitat in the Penobscot River. Habitat access is essential for the recovery of this species which was listed under the U.S. Endangered Species Act in 1967. 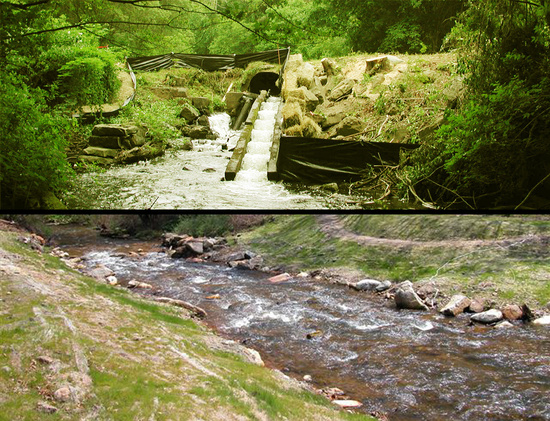 Nearly 400 years ago, the Mayflower touched down near Town Brook, a stream flowing into Cape Cod Bay. The Pilgrims chose what is now Plymouth to establish the first European colony in Massachusetts. After a devastating winter, river herring made their annual return  in the spring. This provided the surviving colonists a rich source of food, helping the new colony to succeed.

By the early 2000s, the 1.5 mile stream of Town Brook was blocked by multiple dams and barriers, reducing herring runs from nearly one million to just 150,000 annually. In 2002, the Town of Plymouth worked with NOAA and 26 other state and federal partners to remove the Billington Street Dam. This was the first project of seven to remove, or provide passage around, dams along Town Brook.

Following the removal of the Billington Street dam, new fish ladders were installed at the Newfield Street and Jenney Grist Mill dams. In 2005, the dam at Water Street was lowered by 12 inches and the Off-Billington Street Dam was removed. During the winter of 2014-2015, the Plymco Dam was removed and the stream bed at the site was restored. In 2018, the Holmes Dam will be removed—the final significant barrier to fish migration along Town Brook.

River herring on this restored run can now swim to an additional 269 acres of new spawning habitat in the Town Brook watershed. With the removal of the Holmes Dam, more than 200,000 river herring will eventually make their way up Town Brook in future runs, up from 140,000 recently counted. There is more work to be done, and Plymouth has set the goal of completing the restoration of Town Brook in time for the 400th anniversary of the 1620 landing of the Pilgrims. 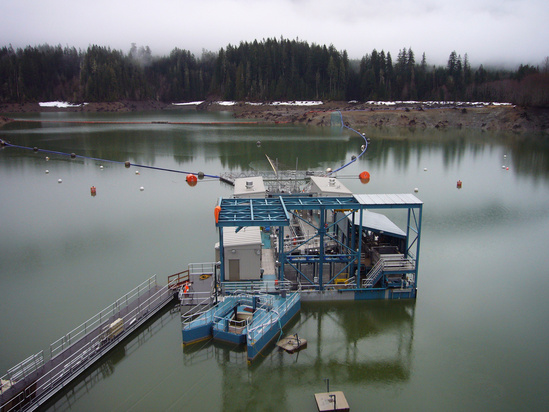 The Baker River basin in Washington State is home to many migratory fish species. Its annual adult sockeye salmon returns have averaged about 3,500 since the 1920s, but plunged to a low of just 99 fish in 1985, imperiling the stock. NOAA Fisheries, Puget Sound Energy, and others analyzed salmon habitat and migration and proposed engineering solutions.

Because conventional fish ladders are not suitable for the two tall dams on the river, a “trap and haul” approach was implemented for upstream and downstream fish passage at this site. An innovative system built by Puget Sound Energy to safely collect, monitor, and transport migrating fish around the dams has been a success for upstream and downstream fish passage. The fish passage system has boosted downstream fish migration to more than 850,000 juvenile sockeye and close to one million total juvenile fish, including sockeye, coho, and Chinook salmon. Meanwhile, the project continues to produce hydropower to the grid and local communities.

Freeing salmon of dams and dwindling habitat on the Rogue River 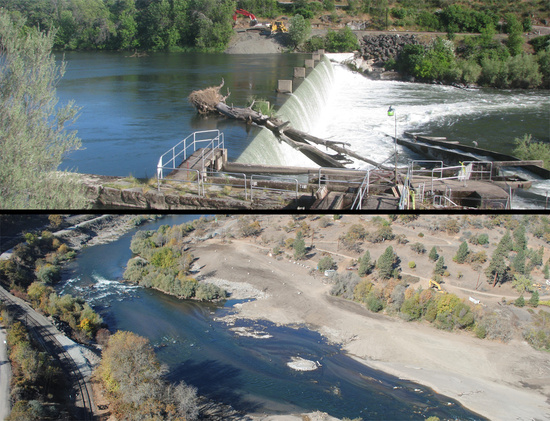 In the late 18th and early 19th centuries, fur trappers in the Rogue River basin reduced beaver populations. This reduced the number of beaver ponds that provided excellent rearing habitat for coho salmon. This was only the first of several negative effects the settlers had on this and other fish species. Later in the 1800s, gold mining and agriculture further impacted salmon, and in the 1900s human-made dams created the latest barriers to migration.

In the 1990s and early 2000s, many dams in the Pacific Northwest  were obsolete, and recovering vulnerable Chinook and coho salmon runs there was prioritized. Three structures in particular were identified as key barriers to salmon spawning grounds: the Savage Rapids, Gold Hill and Gold Ray Dams. From 2007-2010, we worked with more than 10 local, state and federal partners to consecutively remove these three dams so that fish could migrate and spawn throughout the Rogue River.

The culmination of this effort was taking down Gold Ray Dam, a 38-foot-high dam that spanned the width of the Rogue. In removing this third barrier, we restored free-flowing conditions and unimpeded migratory fish access to more than 300 upstream miles within the watershed. This benefited Chinook salmon, steelhead, and Southern Oregon/Northern California Coast Coho salmon—listed as "threatened" under the Endangered Species Act.

­Fish habitat quality has improved and evidence of spawning Chinook salmon has been documented in the river in the areas that used to be the Gold Ray reservoir. Before the Gold Ray Dam was removed, the reservoir provided warm-water habitat ideal for non-native predators of juvenile coho and Chinook. Since cold water has returned, we have seen fewer of these predators upstream of the former dam, which bodes well for recovering species. 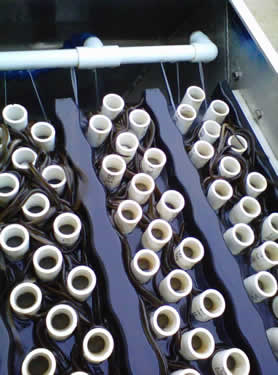 American eels migrate from the Atlantic Ocean into rivers to feed, grow, and mature, but dams along the East Coast prevent their migration. One solution on the Roanoke River allows them to climb into these important habitats.

Young eels enter the river in North Carolina after being carried there by ocean currents. Their journey remains free of physical barriers until reaching the Roanoke Rapids Dam. Built in 1955, the 3,050-foot-long concrete dam is used for hydropower generation. Eels were not able to pass upstream of the dam for decades.

During the dam’s re-licensing process, NOAA worked with local partners to install two eel passage structures, called “eelways.” These are long, sloping ramps with a peg board of pipes to allow the eels to wriggle up and over the dam. A slow trickle of water encourages the eels as they make the climb.

Since then, more than two million eels have migrated upstream into 29 miles of historic habitat. This access is essential to support the life cycle and help recover the population of American eels, currently at historically low levels. This presence of eels also helps promote a healthy ecosystem in the Roanoke River.

Highlighting communities and fish migration on the Cape Fear River 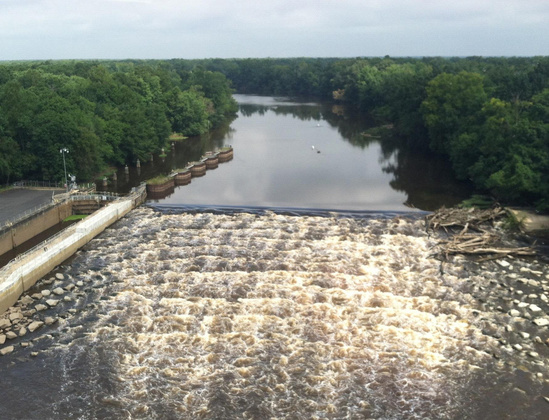 To help with restoring habitat and migration opportunities, NOAA and 29 partners formed the Cape Fear River Partnership in 2011. The partnership uses a holistic approach to support migratory fish, including fish passage, water quality, and habitat. We also focus on building community support from new and unique partners, and provide socioeconomic data to highlight the importance of migratory fish.

To help guide our work, the Cape Fear River Action Plan for Migratory Fishes was published in 2013 to identify threats to healthy migratory fish populations; outline actions to improve water quality, habitat, and fish passage; and assess the community benefits of fish populations on the economy. From 2018 to 2022, NOAA and our partners will construct new fish passages in Lock and Dam No. 1; and analyze new options for fish passage at Lock and Dam No. 2 and 3, and Buckhorn Dam. Meanwhile, we’ll be monitoring fish passage, conducting surveys, and analyzing stocks of striped bass to determine if stocking more fish is warranted .

Our holistic approach serves as an excellent model of a diverse, team approach to addressing declining migratory fisheries and we hope the approach can be effective in other areas of the country. 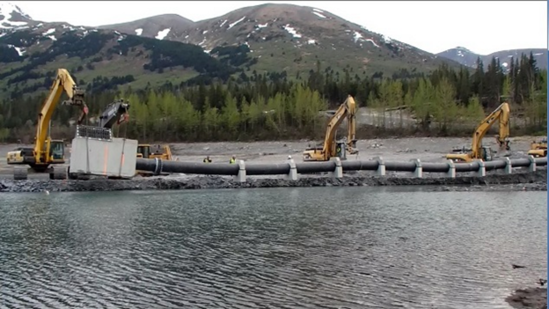 Cooper Lake is a natural lake in the Kenai River watershed in southcentral Alaska.  As it generates power, the Cooper Lake Hydroelectric Project releases cold water downstream into Cooper Creek, important habitat for wild Chinook and Coho salmon. However, this cold water negatively impacted salmon production. When the Cooper Lake Hydroelectric Project was up for relicensing in 2007, NOAA worked with partners to identify a solution to the decreased salmon production caused by the changes in creek water temperatures.

The solution was to build a bypass from an adjacent creek, Stetson Creek, to increase water flows to the Cooper Lake Hydroelectric facility. In addition, warmer waters from Cooper Lake were routed into Cooper Creek to balance the water temperature for salmon. This collaboration allowed for a win-win solution for both fish and power generation in Alaska. 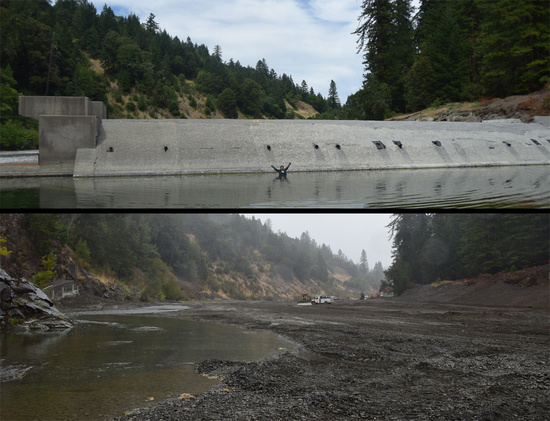 The Benbow Dam, on the South Fork Eel River of Northern California, was built in 1928 to generate power for the town of Benbow. By the early 2000s, the dam was in need of major repairs, and there were significant maintenance concerns. Meanwhile, the dam was prevented salmon and steelhead from reaching their high quality habitat up river during the winter. Before the dam was built, roughly 20,000 Chinook and as many as 17,000 coho salmon swam past the site. In 2010, there were only 1,000 Chinook and 500 coho in this part of the river.

NOAA's Restoration Center partnered with the California State Parks, American Rivers and Questa Engineering to plan the dam's removal, which began in the summer of 2016. It was the second largest in California history when it was completed a year later. Another NOAA partner, the California Conservation Corps, planted native riparian plants at the site, and California State Parks is conducting follow-up monitoring to ensure the plants stay healthy and soil erosion doesn't occur.

This project, in combination with other projects in the headwaters and estuary, are helping to recover populations of salmon and steelhead in the Eel River. We have documented juvenile salmon and steelhead using the restored estuary habitats to rest and grow before returning to the ocean.  This helps them survive their trip to and from the ocean when it’s their turn to spawn.

We’ve improved access to almost 100 miles of high quality spawning and rearing habitat in the South Fork Eel River, which is one of the most important areas for recovery of these species in Northern California.