Kicking off the Second Largest Dam Removal in California

In August 2016, NOAA and partners broke ground on the second-largest dam removal in California. The Benbow Dam, on the South Fork of the Eel River, is a safety hazard. It also limited salmon and steelhead from reaching their upstream habitat. 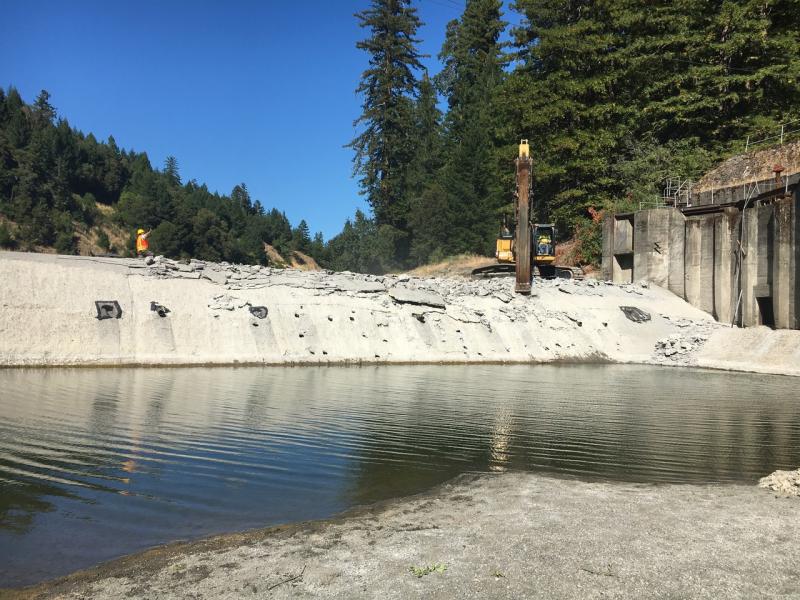 In August 2016, NOAA and partners broke ground on the second-largest dam removal in California. The Benbow Dam, on the South Fork of the Eel River, is a safety hazard. It also limited threatened coho and Chinook salmon, and steelhead, from reaching their upstream habitat. Its removal will help contribute to the recovery of these species.

When the dam was built in the 1930s, water built up behind it, forming a 123-acre lake. The lake has been used for swimming and boating, and was also a tourist attraction for the past 50 years.

However, the dam limits access to upstream habitat during the winter. It also prevents water, sediment, and wood (from trees) from flowing downstream naturally. This lack of natural flow has reduced the quality of habitat near the dam.

The dam is also causing safety issues. The banks of the lake have eroded due to the unnatural wave action caused by the lake and sediment accumulation upstream of the dam. The lake is surrounded by redwood trees, but erosion is causing the banks to be unstable, and they are toppling over. The dam itself is in poor repair and could become a liability.

NOAA Fisheries, along with the California Department Parks and Recreation began removing the dam this week. The project will improve passage to nearly 50 miles of high-quality spawning and rearing habitat, assisting with the recovery of salmon and steelhead. The removal will improve habitat in the former lake area. The California Conservation Corps will also plant native vegetation along the banks, along with other measures, to help control erosion.

Last updated by Office of Habitat Conservation on October 08, 2020