This month we are launching a new series to introduce the people who work at the Northeast Fisheries Science Center (NEFSC). Each month we will feature a new "face" from the Center's five laboratory locations - Orono, ME, Woods Hole, MA, Narragansett, RI, Milford, CT, and Sandy Hook, NJ - and share with you a bit about who they are, what they do at the Center, and what they enjoy doing in their spare time.

Where did you go to high school and college and what did you get your degree(s) in?

I went to Choate Rosemary Hall, which is a private boarding school about 10 minutes from my house. I was a day student and lived at home with my family but had the advantage of high school friends from all over the country and the world. For example, I have close friends from Brooklyn, Japan, Bermuda, Tennessee, Nigeria, and of course other day students who lived nearby in Connecticut. I’m still in contact with many of them, and they are some of the best and closest friendships I have.

I attended Brown University to study Latin and ancient Greek, and while my focus was on literature and languages, I also studied classical history, art, architecture, and archeology. My undergraduate work included semesters abroad in Athens, Greece, and Rome, Italy. I even spent a summer working on the archaeological excavation of an ancient Roman Basilica on the Greek island of Corfu.

After graduating from college I moved to Rome for two years where I taught English as a Foreign Language to Italians. While there, I worked on a writing portfolio of short stories to submit to creative writing graduate programs. I applied to several creative writing programs, but finally settled on a PhD track in English at the University of Louisiana, Lafayette. At the time, UL Lafayette was one of the few places that offered a PhD program with a creative writing focus; most universities only had Master of Fine Arts (MFA) degrees in creative writing. The program in Lafayette was a great fit for me because it had a heavy course load in literature was well as writing workshops.

After 10 years of translating Latin and ancient Greek works of literature, I wanted to spend time seeing how writers in English played with language. My interest in the classics originated with literature and in understanding how culture both shapes and is shaped by language. I was grateful to have several years to examine literature in English with the same depth. I earned a PhD in English at the University of Louisiana, Lafayette. My concentration was in creative writing and American literature.

At the time, I had no idea how I would “use” these degrees to settle on a career. I only knew that those studies were good for my writing, and honing my craft was the main priority. I am the first person in my family to ever go to college, and my parents couldn’t understand why I wasn’t being more practical with my studies. At times, my mother was brought to tears that I wasn’t studying something I could “use.”

Tell us a little about how you came to work at the Science Center. 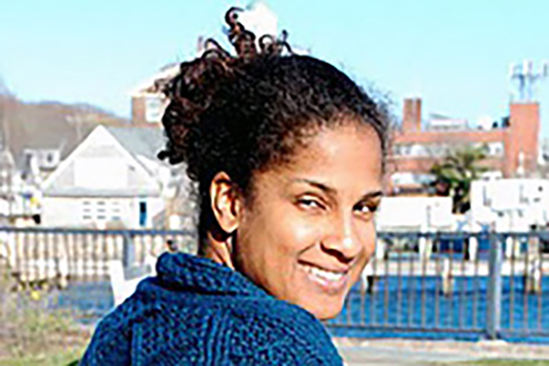 After graduate school, it was immediately clear that joining the ranks of aspiring English professors did not interest me. Teaching wasn’t my primary goal, and so I looked for other jobs where I could use my wordsmithing skills. Instead of teaching, I worked as a science editor at the U.S. Geological Survey (USGS) National Wetlands Research Center in Lafayette, Louisiana. It has a publishing shop with several editors and editorial assistants as well as two graphic designers and a web designer.

I had been working there for three years when a coworker forwarded me a job listing on USAjobs.gov. I tried my best to find some personal connection with someone at the center, but no one in my networks seemed to know anyone at the Center, so in the end I just applied blind. The job description matched the work I was already doing at USGS; the ecosystems being studied by the two centers are different, but my work in helping scientists communicate it clearly and accurately was the same. I thought it would be nice to move back to New England and be closer to my family. By the time I heard back from NOAA Fisheries it was months later, and I'd forgotten that I'd even applied, so I was pleasantly surprised to be asked for a phone interview.

I am a science editor. I spend much of my day revising research papers to ensure clear organization, logic continuity, correct use of language, and resolution of contradictions. I also fact check geographic locations and species as well as proofread for typographical errors, consistency, and grammatical accuracy. I edit the reports in our center series, the Technical Memoranda and the Center Reference Documents. These papers are available to the public and are often used by other scientists and academics in similar fields. They are all posted online and are in the public domain.

I love to knit, read, and I am also a writer. I published my first collection of poems, Return Flights, in 2016, and I'm currently working on a novel. I also like to play soccer, sail, and am very active in community outreach and civic engagement locally in Falmouth, Mass.