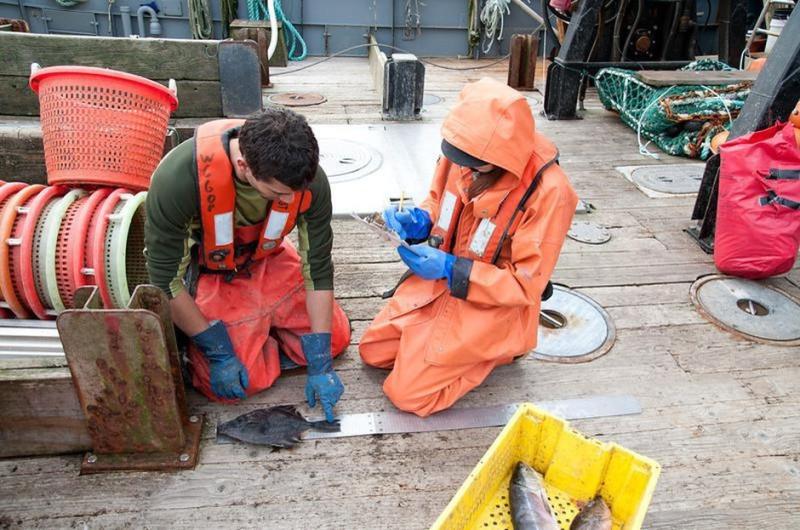 If you’ve watched a reality TV show profiling life on U.S. commercial fishing vessels, you know it’s a challenging and dangerous work environment for the crew. Long working hours, harsh weather conditions, and days or weeks away from home in an inherently dangerous environment can take a hefty toll.

What you may not realize is that many fishing vessels deploy with fishery observers or at-sea monitors. They have a different job than the fishing vessel crew. Fishery observers and at-sea monitors (observers) are trained biological technicians who collect data to support a wide range of conservation and management activities. They are active in all five NOAA Fisheries management regions.

Observers collect catch and bycatch data from U.S. commercial fishing and processing vessels, as well as shore-side processing facilities and motherships. Observers are dedicated professionals who undergo a rigorous scientific and statistical training program. They are able to identify and take samples of a myriad of ocean life that might come aboard the fishing vessel.

As part of their training, observers are encouraged to report inappropriate behavior. They are given examples of unacceptable behavior and taught what steps they can take if something inappropriate happens.

“While life aboard a commercial fishing vessel will never be completely safe from an occupational standpoint, it must be an environment where observers do not have to worry about harassment, intimidation or assault,” said James Landon, Director of NOAA’s Office of Law Enforcement. The office has a zero tolerance policy for observer harassment. OLE special agents and enforcement officers will investigate allegations of assault or harassment of observers. Violators are subject to civil and criminal penalties—up to 6 months in prison and a $130,000 fine.

Addressing Harassment in the Field

Special Agent Jaclyn Smith works with the North Pacific Observer Program in Alaska. Agent Smith suspected that observer harassment was occurring more frequently than observers were reporting. In response, she initiated a new outreach effort to make sure that observers felt comfortable reporting issues. She also worked to ensure that fishing vessel crews, captains and fishing company managers understood what constituted harassment of observers. They learned the potential penalties for not providing a safe environment for observers, both at sea and in shore-side processing facilities.

Earlier this year, NOAA issued a $30,000 Notice of Violation and Assessment to a first mate of a factory trawler. The individual had made an unsolicited sexual advance to an observer and also made multiple comments of a sexual nature on near-daily basis. When the observer brought the issue to the captain, he took immediate action. First, he separated the first mate from the observer. Then he disembarked the first mate at the next offload, even though he was not previously scheduled to disembark.

The company immediately notified the observer's employer and OLE, and cooperated with OLE throughout the investigation. The observer also expressed her gratitude towards the captain and company for helping her feel supported and safe.

There was a second incident involving the sexual assault of an observer on a different factory trawler. NOAA issued a $55,000 NOVA to a crew member who entered an observer's stateroom and made an unsolicited sexual advance towards the observer. The observer reported the crew member to the data manager—a former observer—who provided immediate support. The captain conducted his own investigation, fired the crew member, and restricted him to his quarters until the vessel returned to port.

The company's government liaison officer notified OLE and the observer's employer was cooperative throughout the investigation. The observer told officers that she felt supported by NOAA throughout the entire process. She continues to be part of the observer program because of that support.

Observer Safety is a Top Priority

“If observers report harassment, they need to know that we will take it seriously and conduct an investigation,” said Smith. “Observer safety is a top priority for NOAA.”

Any observer who feels like they have experienced harassment should notify their supervisor, their observer program, or whomever they feel most comfortable telling. They can also call the NOAA Enforcement hotline at (800) 853-1964.

NOAA Fisheries to Develop a PEIS for Saltonstall-Kennedy Program

Last updated by Office of Law Enforcement on January 03, 2020