A low-tech mini-camera (miniCam) may turn out to be an efficient way to identify fish during research surveys. 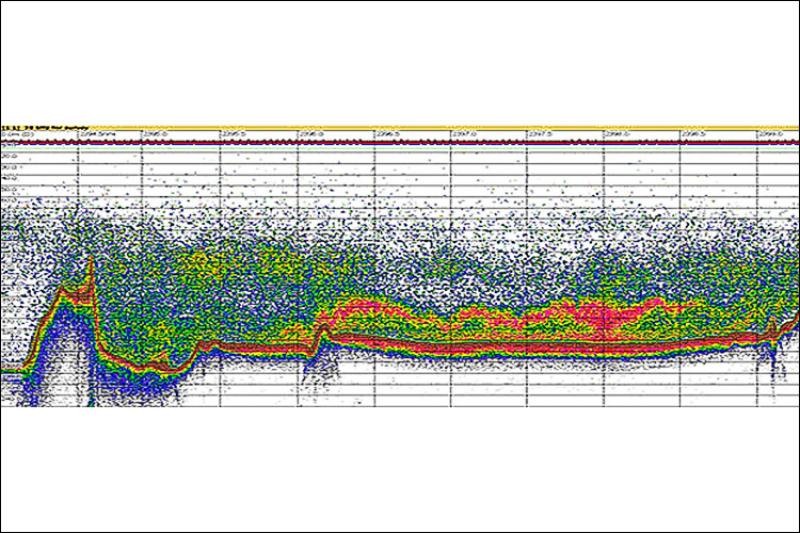 Echogram image at Kodiak Island, Alaska on 16 March 2016.  The vertical axis represents depth and horizontal axis represents distance along the ship track.  The thick, dark red line along the entire lower portion of the echogram represents the seafloor.  Note the particularly high vertical relief including a pinnacle located at the left side of the echogram.  Fish backscatter in the vicinity of these types of rugged seafloor features is ideally suited for sampling with MiniCam (see text below).  The blue-green scattering represents pre-spawning pollock, which can form very dense aggregations (red layer) often near the seafloor.

NOAA Fisheries scientists conduct acoustic-trawl surveys to estimate the distribution and abundance of commercially important species like pollock in the Bering Sea and Gulf of Alaska. Resource managers use this information to set annual catch limits for the fishing industry.

Acoustic-trawl surveys conducted by fisheries scientists use echo sounding instruments, which produce high frequency sound (higher than we can hear) to estimate the number of fish in the water column. The sound waves transmitted by the echo sounder reflect off the fish as echoes, and are then received by the echo sounder. The collected echoes are often displayed as an echogram, or picture of the sound.

To identify what species are represented in the echogram, researchers typically tow a net (trawl) to catch a sample of the species of fish that are present. However, innovative tools such as underwater cameras may be another way to identify species.

If the bottom is rocky and fish are swimming close to the seafloor, towing a net to sample fish can be difficult. There is a chance that the net could accidentally contact the bottom and be damaged. In other cases, the vessel used to effectively collect acoustic data may not be designed to fish a suitable net. These are just a few of the situations when a lowered underwater camera system may be the perfect tool to identify the species recorded in the echogram.

While underwater camera systems have benefits, a persistent problem that has plagued users is that many fish species effectively avoid these systems in midwater.

"We have a lot to learn about what attracts and what repels fish," said Chris Wilson, manager, Midwater Assessment and Conservation Engineering Program (MACE), Alaska Fisheries Science Center. "The amount and color of the light, which is needed to illuminate the fish for the camera in low light environments, the up and down motion of the deployed camera package, and/or the size of the camera package might evoke different reactions in different species."

Wilson added, "One fish species might be attracted to some of these stimuli, another might flee from them, while another may not respond at all. Our lack of success in imaging pollock in midwater aggregations with our existing lowered camera systems may have something to do with how pollock are reacting to these systems."

To begin to explore the influence that camera size may have on fish avoidance behavior, Wilson asked two Alaska Fisheries Science Center researchers who have an expertise in building and using underwater camera systems (Kresimir Williams, Rick Towler) to build a very small camera, which could be deployed from a fishing rod (MiniCam).

The device is pretty simple. It is a small commercial point-and-shoot camera encased in a very small underwater housing that is lowered into a school of fish using an electric rod and reel. The camera snaps images every 10 seconds. When the camera is brought to the surface, researchers examine the pictures taken. The scientists can quickly verify what species of fish are causing the backscatter.

Left: the MiniCam setup with lead weight setup deploys the small camera to depths of 300 m.  Center: close-up of fish-shaped camera housing with light source housed in the "fish tail" section to minimize overall housing size yet provide suitable distance between flash and camera.  Right: The electric reel can recover the camera from a depth of about 300 m within a couple of minutes when operated by a sea-hardened expert fisher.

Alaska Fisheries Science Center scientist Alex De Robertis recently had an opportunity to test the small MiniCam package in Resurrection Bay together with another innovation developed by the Center, the seafloor-mounted upward-looking echosounding systems, which monitor fish in the water column above.

"Walleye pollock spawning occurs in many areas at different times during the winter. If we survey an area too early or too late, all of the spawners may not be on the spawning grounds, so our abundance estimates will be too low," said De Robertis. "We've been using the seafloor-mounted echosounding systems to augment our traditional vessel surveys in a few locations in Alaska," "This equipment enables us to monitor when spawning is occurring during the winter months. This helps us potentially improve the accuracy of our stock assessments."

In Resurrection Bay, scientists arranged for a trip on a small research vessel from the University of Alaska, Fairbanks to help interpret the acoustic data that they were collecting with the seafloor-mounted echo sounder systems. It was important to verify that pollock was the major species forming the midwater acoustic layers, but the small boat could not fish a large midwater net, so instead they used the MiniCam.

"We were able to get some pretty good images that clearly show that the seafloor-mounted echo sounders were detecting dense pollock aggregations," said Alex De Robertis. "This is the second deployment of the MiniCam into midwater pollock aggregations this year, and we've managed to get fish images both times. This is really encouraging. It may be that the small size of the MiniCam may work to our advantage, but this will require additional testing."

According to Wilson, the team will likely do some further testing of the miniCam. Tests may include comparisons with net catches, and deployments under different environmental conditions including different seasons (e.g., spawning versus non-spawning fish), time of day, and depths. If things match up, there are lots of possibilities for this low-cost and seemingly effective tool.

"We’ll probably look next at developing a small type of stereo camera so we can actually collect both species and fish length information to help us in our assessment survey work," said Wilson. "We may also do some testing with different colors of light to which fish are less sensitive. Red light may be worth exploring, because some fish are not very sensitive to red light. However, it is absorbed relatively quickly in the water column, and the challenge will be to ensure that it is still bright enough to get quality photographs.”