In 2010, three species of rockfish in Puget Sound, WA were listed under the Endangered Species Act (ESA) and received additional protections to aid in their recovery. The decision was based on the best available science at the time. There remained considerable uncertainty whether these populations were distinct from populations found on the outer coast—a defining criteria for ESA listings.

NOAA Fisheries researchers set out to answer this question, using genetics to determine if these rockfish populations were distinct from outer coast populations. Population genetics is a powerful technique, but one that requires getting enough tissue samples to analyze. This is a challenge when the species are rare as was the case with these rockfish species. Overcoming this challenge led the researchers to a unique solution. The results were recently published in a special issue of the scientific journal Citizen Science: Theory and Practice.

“Fishermen have the knowledge and expertise that allowed us to answer some really basic questions about these threatened rockfish species,” said Kelly Andrews, lead author of a new scientific paper and research fisheries biologist at NOAA’s Northwest Fisheries Science Center.

“The recreational fishing community and charter boat captains have been out on the water daily, sometimes for decades. They have a lot of built-up information about how fish populations are doing and where those species, especially rare species, are most likely to be found and captured,” said Andrews.

The results of the collaboration were impressive. When the researchers tapped into the fishing community’s knowledge, they tripled the number of sampling sites and doubled the number of ESA-listed rockfish tissue samples collected. 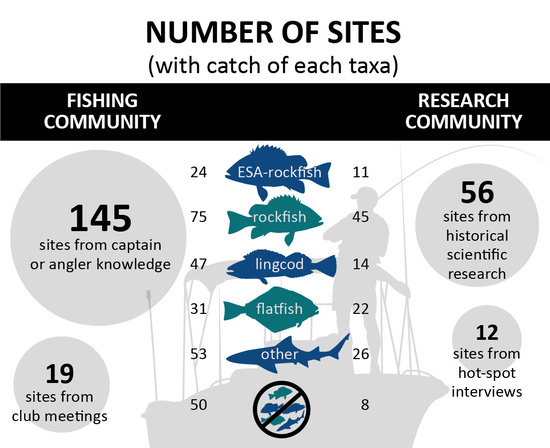 Fishermen shared their knowledge about where to find different species rockfish. As a result, the number of sample sites increased threefold as compared to using the research community’s information alone.

When researchers analyzed the genetic make-up of the collected samples, they found two significant results. Yelloweye rockfish found within Puget Sound and the inside waters of British Columbia, Canada were genetically different from those found along the outer coast. That is, there are distinct population groups inside and outside the Puget Sound/Georgia Basin region. In contrast, canary rockfish were genetically similar across the regions; the populations were more connected than originally thought.

With this new information in hand, federal fishery managers expanded the ESA protections for yelloweye rockfish by modifying the Puget Sound population’s  boundaries. In addition, ESA protections were removed for canary rockfish; the first time that’s ever happened for a marine fish species.

By working with the recreational fishing community, the researchers found a cost-efficient way to collect the necessary samples for genetic analyses that led to improved management of endangered rockfish.