Caught in an Atlantic hurricane, satellite-tagged loggerhead turtles changed their dive behavior and movement patterns as the storm passed. The tags also recorded changes in the environment. 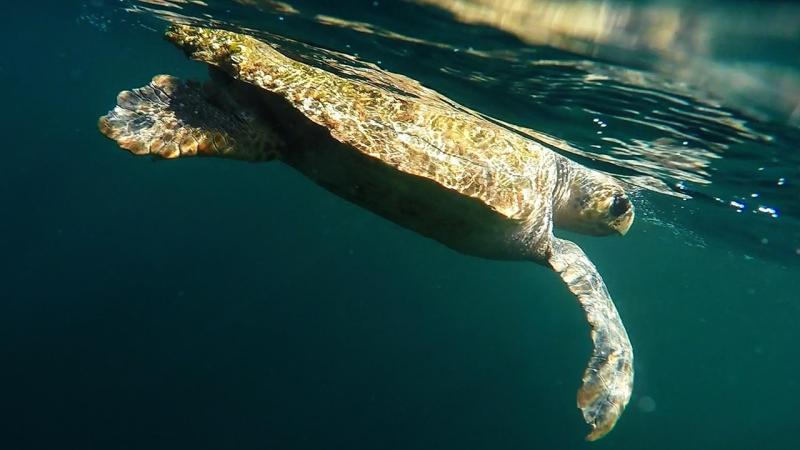 In early June 2011, NOAA Fisheries researchers and colleagues placed satellite tags on 26 loggerhead sea turtles in the Mid-Atlantic Bight. The tagging was part of ongoing studies of loggerhead movements and behavior. The Mid-Atlantic Bight, off the U.S. East Coast, is the coastal region from Cape Hatteras, North Carolina to southern Massachusetts. A little more than 2 months later, on August 28, Hurricane Irene passed through the area, putting 18 of the tagged turtles in its direct path. The researchers were able to track changes in the turtles’ behavior coinciding with the hurricane, and found that they reacted in various ways.

“Hurricanes are some of the most intense weather events loggerheads in the mid-Atlantic experience, and we thought it was worth investigating how turtles in our dataset may be influenced by these dramatic environmental changes,” said Leah Crowe, a contract field biologist at the NOAA Northeast Fisheries Science Center’s laboratory in Woods Hole, Massachusetts, and lead author of the study published recently in Movement Ecology.  “It was a perfect storm situation in terms of location, timing, and oceanographic conditions. We found that the turtles responded to the changes in their habitat in different ways.” 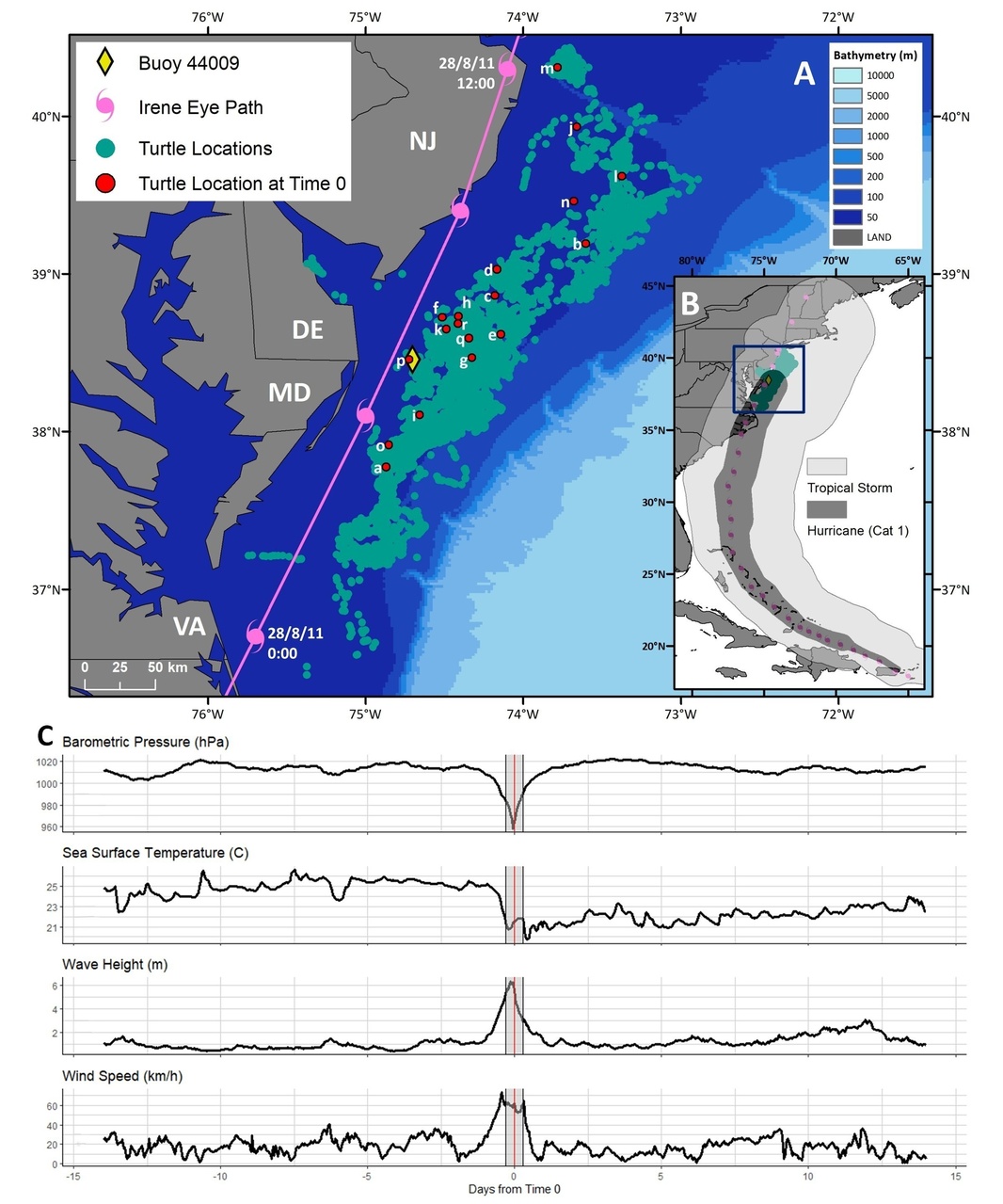 Map showing track of Hurricane Irene in August 2011 and location of the 18 tagged turtles in its path. Inset map shows the wind speeds. Data from Buoy 44009 are shown at bottom. Time 0 is when the turtles and the hurricane were closest to each other. Credit: Crowe et al

Satellite tags attached to a turtle’s carapace, or shell, transmitted the turtles’ location and dive behavior. They also  recorded sea-surface temperatures and temperature-depth profiles for approximately 13 months. This enabled the researchers to investigate the movements of 18 juvenile and adult-sized loggerhead turtles and associated oceanographic conditions as the hurricane moved through the region.

Most of the turtles moved northward during the hurricane, aligning themselves with the surface currents — perhaps to conserve energy. Researchers observed longer dive durations after the hurricane for turtles that stayed in their pre-storm foraging areas. Some dives lasted an hour or more, compared with less than 30 minutes for a typical dive before the storm.

The turtles that left their foraging areas after the hurricane passed moved south earlier than would be expected, based on their normal seasonal movements. This change was also more than a month earlier than the typical seasonal cooling in the water column, which is also when the foraging season for loggerhead turtles ends in the Mid-Atlantic Bight.

“Loggerheads experience environmental changes in the entire water column from the surface to the bottom, including during extreme weather events,” said Crowe. “This study was an opportunistic look at turtle behavior during a hurricane. Their behavior makes loggerheads good observers of oceanographic conditions where they forage.” 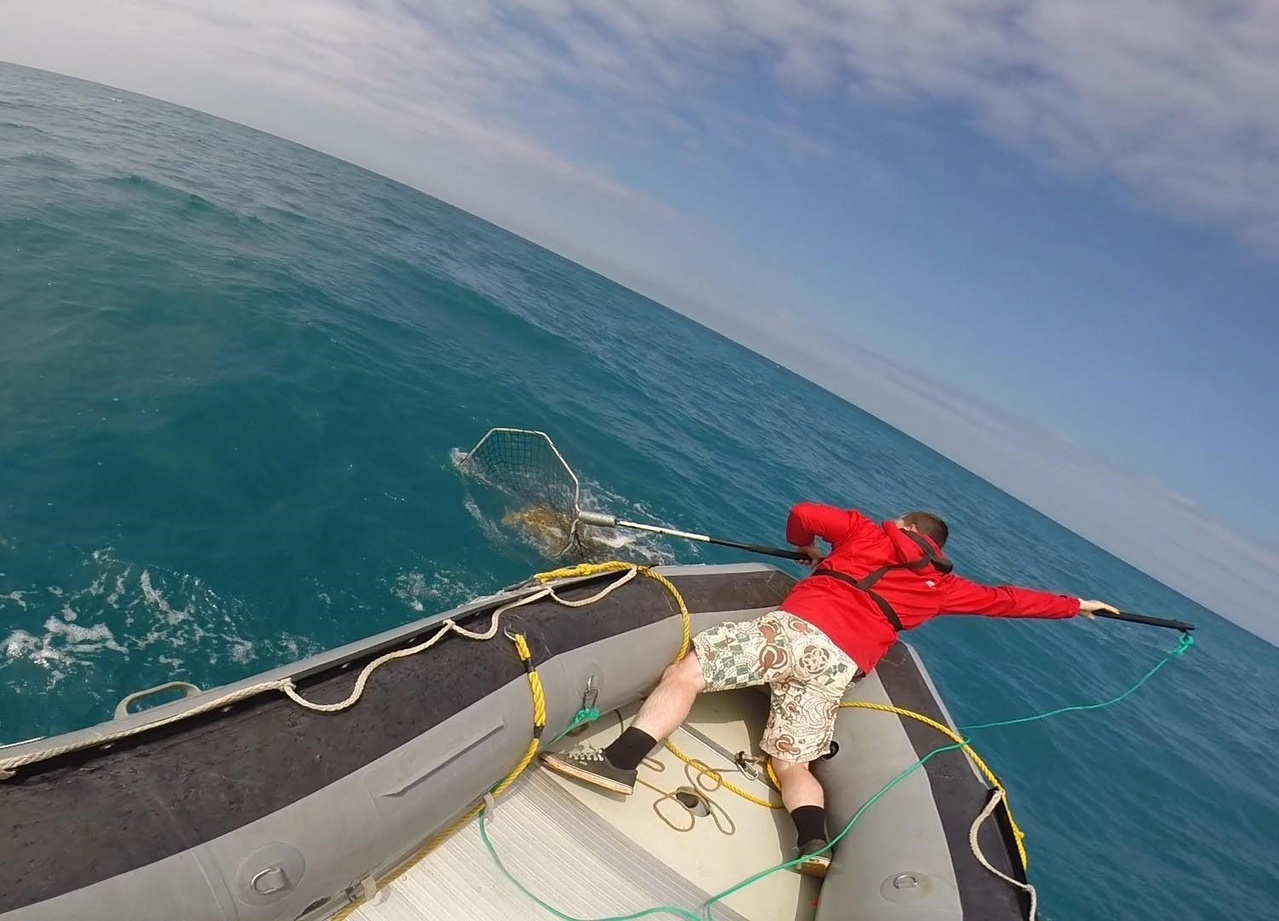 A loggerhead is captured in a net from a small boat during May 2017 field work. Biological samples are collected, and the turtles are weighed, measured, and tagged before they are released back to the sea. Photo: NOAA Fisheries

The study was conducted by researchers at the Northeast Fisheries Science Center and colleagues at the nearby  Coonamessett Farm Foundation in East Falmouth, Massachusetts. The team has tagged more than 200 loggerheads in the Mid-Atlantic Bight since 2009.

This work has created a continuous time-series of data on loggerhead sea turtles. With 10 years of data, researchers can now get a deeper understanding of how turtles behave and what environmental factors drive them. They can also look back at the data and ask new questions, as they did in this study.

Waters in the Mid-Atlantic Bight are highly stratified, or layered, by temperature in the summer. At the surface, water is warm. A cold layer, also called a cold pool, forms beneath this warm layer and is present from May to October. The presence of the cold pool overlaps with the Atlantic hurricane season, which runs from June through November. It also overlaps with the presence of foraging loggerheads that are in the area between May and September.

Hurricane modeling is especially difficult in the Mid-Atlantic Bight because of the cold pool. In this study, it was unclear which aspect of the environmental changes prompted behavioral changes. Previous studies have found that loggerhead behavior appears to be sensitive to changes in water temperatures throughout the water column. Hurricanes cause the water layers to mix, which creates cooler surface temperatures. The mixing also disrupts the thermocline — the boundary layer between warm surface waters and colder, deeper waters. 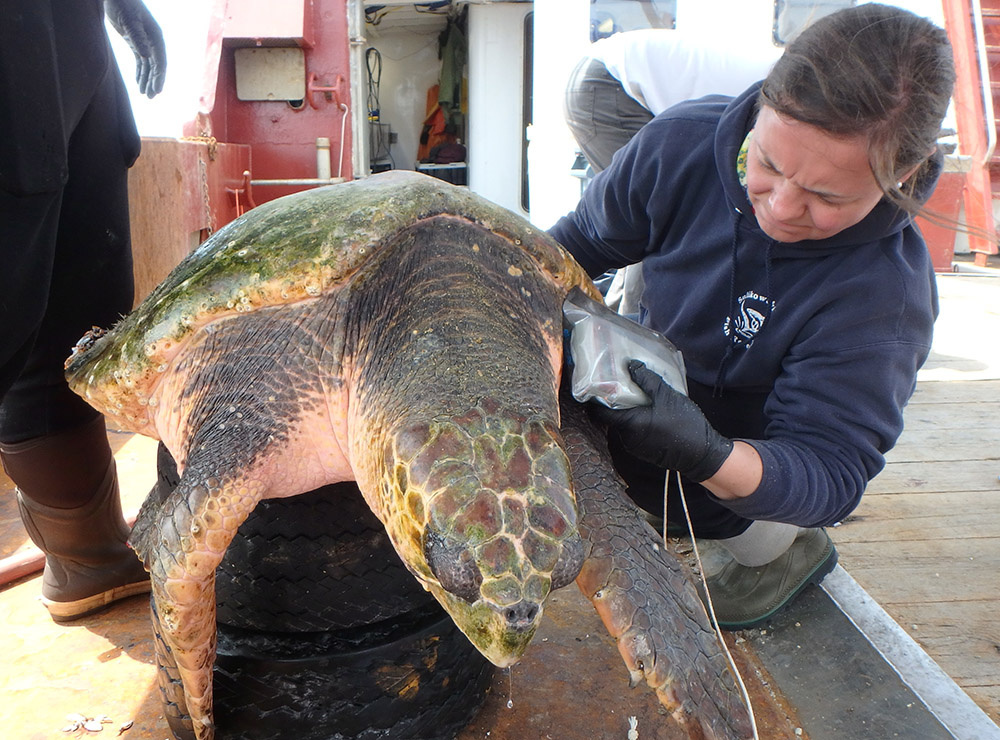 Loggerhead turtle, placed on tires for cushioning, awaits a satellite tag during the 2018  tagging and sampling field work. Amy Carlson of the Coonamessett Farm Foundation is scanning for a PIT tag. Photo: NOAA Fisheries

Ocean temperature data recorded by the turtles’ satellite tags are consistent with observations from weather buoys and autonomous gliders operating in the region. Depending on how many tags are deployed, data from tagged turtles can cover a more extensive area within a season than other oceanographic data sources.

More measurements of water temperatures throughout the water column in the region could help improve oceanographic models. Researchers say data from the turtle tags are an underused resource that has the potential to improve weather models, including hurricane models.

Most Impacts on Turtle Behavior Unknown

Many of the natural and human-induced impacts on sea turtle behavior, or the environments that sea turtles live in, are still unknown.

Previous studies indicate that sounds from dredge operations, seismic activity,offshore wind farm development, and marine recreation may also impact sea turtle distribution and dive behavior. Turtles might be impacted directly or through habitat alterations. While studies have looked at how tropical storms and hurricanes affect some marine species, there are few examples of examining sea turtle interactions with large storms.

In this study, turtle behavior did not return to pre-storm behavior within 2 weeks after the storm.

“The long-term cumulative effects of a changing climate and the increase in intensity of hurricanes and other storms is something that needs to be looked at. Changes in sea turtle movements and behavior can affect abundance estimates and management decisions,” Crowe said. “This study reminds us that turtles live in a dynamic environment, and we cannot assume their behavior will be consistent throughout space and time.”

The study was supported by funds from the Atlantic Marine Assessment Program for Protected Species and the Sea Scallop Research Set-Aside Program.