Bowhead whales generally live in Arctic waters around 54° North latitude, migrating north into the high Arctic in the summer months and to lower latitudes of the Arctic in the winter. For the past few years a lone bowhead has been sighted in the waters off Cape Cod, Massachusetts. 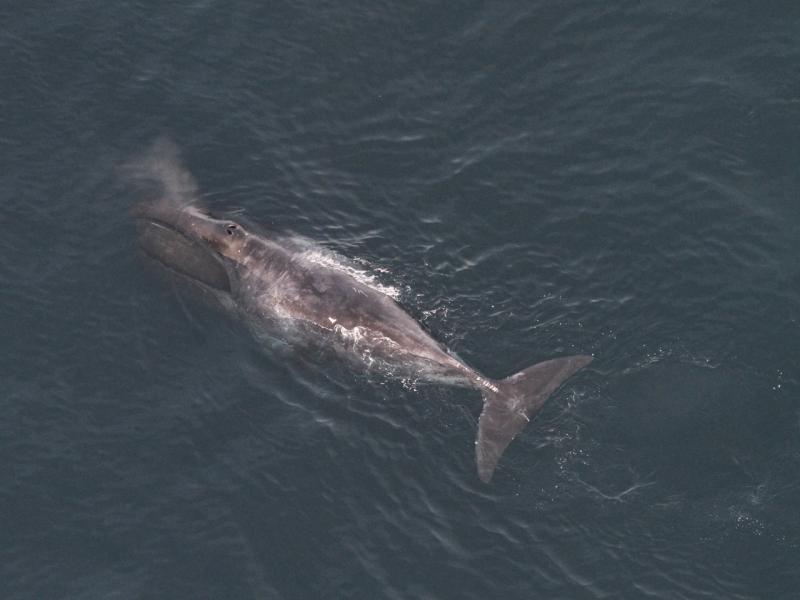 From 2012 through 2017, whale researchers observed a lone bowhead whale a number of times in the Gulf of Maine. This Arctic whale was more than a thousand miles from the southernmost extent of its range, socializing and feeding with other whale species before it disappeared from sight. 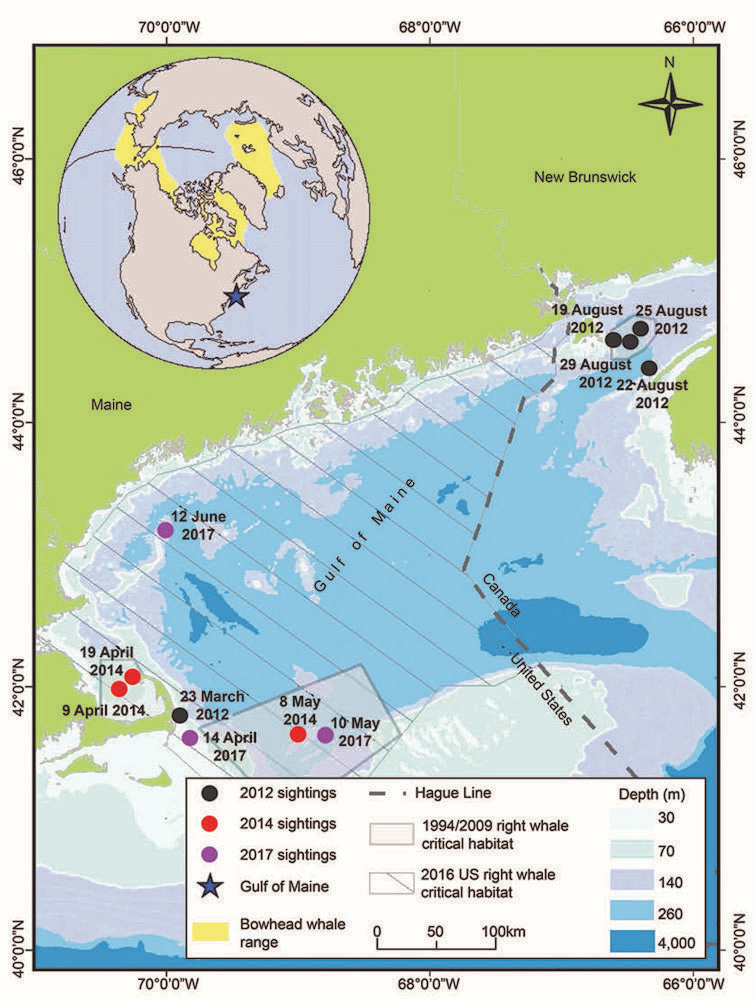 “We don’t know where this particular whale came from or why, and why it returned to the same areas over several years although the availability of food may be a reason,” said Peter Duley, a marine mammal scientist at NOAA’s Northeast Fisheries Science Center in Woods Hole, Massachusetts. He and fellow researchers were intrigued and wrote about the bowhead encounters in an article published recently in the Journal of Cetacean Research and Management.

The lone bowhead, estimated to be a sub-adult about 10 meters (33 feet) in length, was sighted 13 different times during 2012, 2014 and 2017 in four locations in the Gulf of Maine between roughly 41° and 44° N latitude, far south of its present-day range. Unique marks and minor entanglement scarring allowed experienced whale researchers to identify this individual animal.

The confirmed sightings reported in the recent paper are the southernmost for a bowhead whale in the western North Atlantic Ocean.

Bowhead whales generally live in Arctic waters around 54° North latitude, migrating north into the high Arctic in the summer months and to lower latitudes of the Arctic in the winter. Their numbers were reduced by commercial whaling but have been increasing in recent years.

“Unfortunately, we were not able to collect a genetic sample to learn more about this whale. In addition, the acoustic recorders that were in place when the different sightings occurred in Cape Cod Bay and on the shelf break in the Gulf of Maine did not collect any identifiable bowhead sounds,” said Duley, who is also a member of the Center’s aerial and shipboard whale survey teams.

The first sighting of the lone bowhead occurred in March 2012 off Chatham, Massachusetts as the bowhead socialized with a group of four right whales. The same bowhead, confirmed by photographs, was also observed on four days in August 2012, alone and feeding in the Bay of Fundy.

Two years later, in April and May 2014, the same whale was sighted in Cape Cod Bay and in the Great South Channel east of Cape Cod, feeding either alone or with right whales and sei whales.

The last sightings to date, in the spring of 2017, were made in the Great South Channel and the Gulf of Maine near Jeffreys Ledge in the vicinity of several fin whales and a humpback whale. 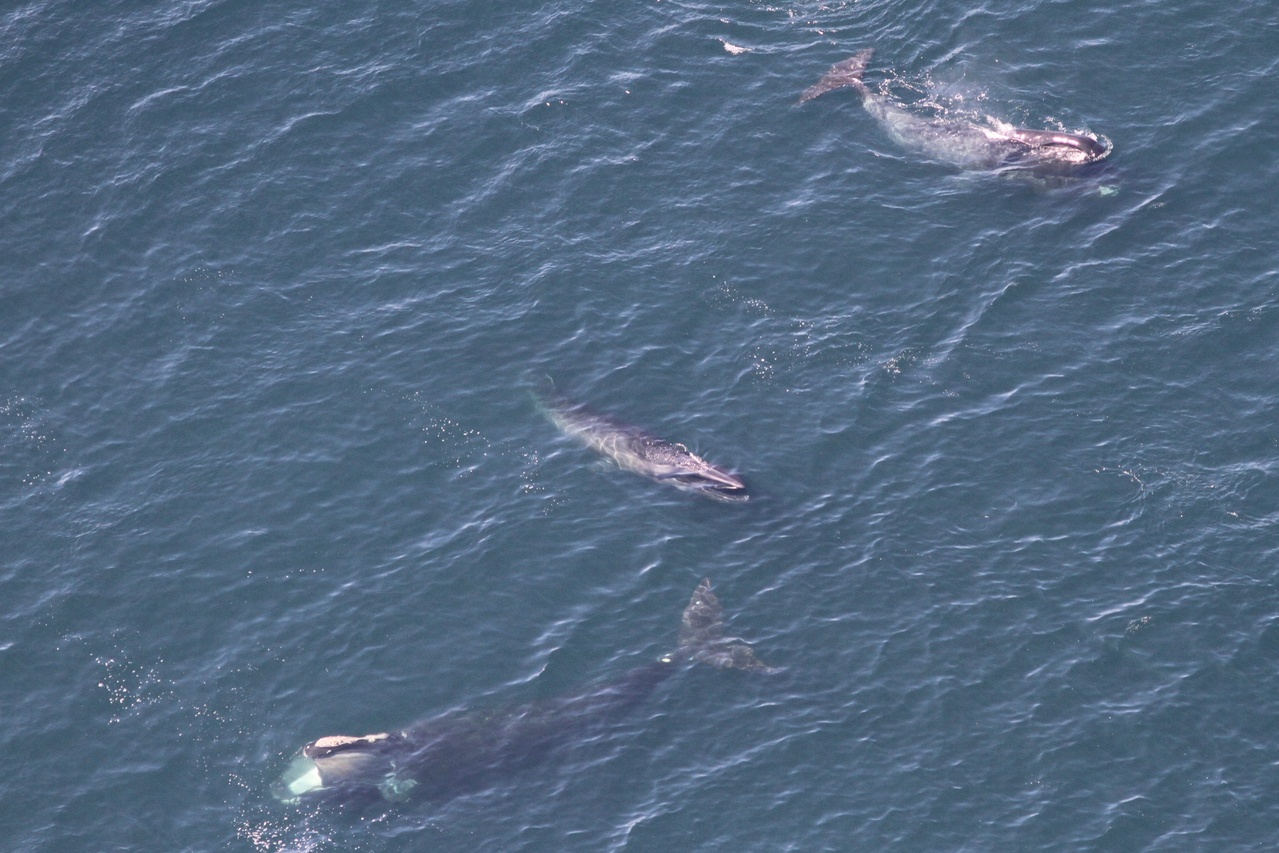 “Our sightings of a bowhead whale on May 8, 2014 in the Great South Channel co-feeding with a sei whale is the only known sighting of that nature,” said Duley. “While the feeding and behavior of the bowhead observed in the Gulf of Maine has been typical of that species, the fact that it occurred so far south of its range in three different years and that the bowhead interacted with North Atlantic right whales, and in particular sei whales, made these sightings very unusual.”

Researchers collected zooplankton to determine what the bowhead was feeding on during the various sightings. As expected, the whale was feeding on calanoid copepods, a type of zooplankton and the main prey for a number of baleen whale species.

There have been no further sightings of this bowhead whale, or any other bowhead whales, in the Gulf of Maine region since 2017.

Bowhead whales and North Atlantic right whales do not typically occur in the same areas at the same time, although overlap has been observed. In recent years, North Atlantic right whales have shifted their distribution and density away from areas where they were regularly seen from the 1980s to the early 2000s. In recent years the Northeast Fisheries Science Center’s aerial survey team and others have increasingly sighted right whales further north, to at least 48° N latitude, still well south of what has been regarded as the southern limit of the bowhead whale’s current range.

“The bowhead sightings in the Gulf of Maine and sightings in Newfoundland and European waters in recent years, along with the changes observed in North Atlantic right whale distribution and density, raise many questions,” Duley said.

In addition to Duley, authors of the study include researchers at the Center for Coastal Studies, University of Massachusetts Boston, Anderson Cabot Center for Ocean Life at the New England Aquarium, Alaska Department of Wildlife Management, Okapi Wildlife Associates, Greenland Institute of Natural Resources, and Associated Scientists at Woods Hole.