Making the Connection Between Climate and Fisheries

As the climate changes and the oceans warm, fish populations are moving in search of cooler waters. That is part of the reason why New England fishermen have been catching black sea bass and longfin squid in the Gulf of Maine in recent years, far north of the animals’ usual range. In other places, it’s the absence of a species that’s notable. Just ask lobstermen in the Long Island Sound, who have had little to catch since the range of this valuable species that once supported them shifted north in recent decades.

These changes present a number of challenges both to fishermen, who might need to adapt their business strategies, and to fishery managers, who need reliable information to set sustainable fishing levels.

Jon Hare is the director of the NOAA’s Northeast Fisheries Science Center Laboratory in Narragansett, Rhode Island, and he studies how physical conditions in the ocean affect fish populations. Hare is a fisheries oceanographer, and his work straddles two disciplines. “When I’m with fisheries people, I’m the oceanographer,” he says. “And when I’m with oceanographers, I’m the fisheries guy.”

In this interview, Hare discusses how fish are shifting their distributions in response to climate change and how those shifts ripple through the ecosystem. To adapt to these changes, Hare says, we need to increase our ability to forecast fish populations even as climate change drives them in unpredictable directions. That will require increased collaboration between fisheries biologists, oceanographers, and climate scientists.

You and your colleagues have been researching how fish respond to changing ocean temperatures. What have you found?

A number of scientists from NOAA and elsewhere have been looking at this problem, and multiple studies have found that about two-thirds of the fish populations on the Northeast U.S. continental shelf are moving northwards. Most of the earlier work was done on adult fish, but some more recent work has focused on the earliest life stages of fish, when they’re tiny larvae floating in the water column. We’ve found that in many cases larval distributions are also shifting northwards. So not only are fish populations shifting northward, but their spawning locations appear to be shifting northward as well. There are exceptions, but that’s the general trend.

Is the hypothesis that they’re heading north because they’re trying to stay within their preferred temperature range as the ocean warms up around them?
Yes, that’s the hypothesis, and it’s well supported by a study led by Malin Pinsky at Rutgers University. He looked at more than 350 species from all over North America and found that not only are fish moving, but that their movements track local temperatures very closely. Where temperatures have changed a lot, the movements on average have been greater, and visa versa. So at least some portion of the shifts are linked to temperature.

But we know from other studies that temperature isn’t the only factor. For instance, with summer flounder, a study led by Rich Bell at the NOAA Narragansett Laboratory found that changes in fishing pressure are also playing a role. In the 1990s, summer flounder populations were at low levels. Since then, a new management plan has been put in place that reduced fishing pressure, and today there are more older, larger fish out there. Those older, larger fish migrate further north, and so the range of the species has expanded north as the population has grown. In that case the northward shift is good news, and it shows that our efforts to reduce overfishing are paying off.
We’ve been speaking about the movement of individual fish species, but what does all this movement mean on an ecosystem level?

Each species responds somewhat differently to environmental changes. So as temperatures change, some species move out while others move in. Some are moving fast and some are moving more slowly. In any given location you’re shuffling the community of species in the ecosystem, and that creates a number of challenges both for fishermen and for managers.

For instance, many recreational and state-water commercial fisheries are managed spatially. In the case of black sea bass, to name just one, the total catch is divided among the states, with some states allocated more catch and some states allocated less. These allocations, however, are based on where the fish were in the late 80’s and early 90’s. But since then, the fish have moved north, and now New England fishermen are catching black sea bass in the Gulf of Maine. Those fishermen bump up against their catch limits very quickly, while fishermen from the Mid-Atlantic have to work much harder to catch their limit. That mismatch between the regulations and the distribution of the stock creates a lot of inefficiencies in the fishery. 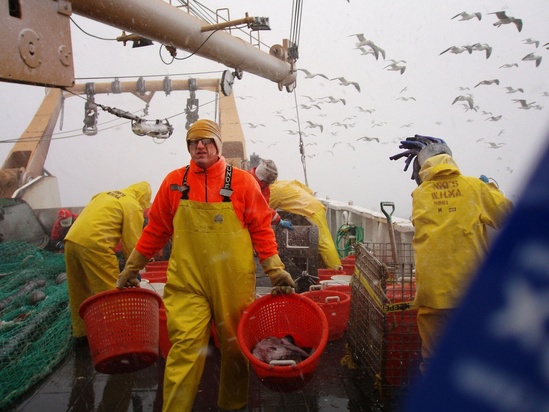 NOAA Fisheries scientist Jon Hare carries baskets of fish during the 2006 winter trawl survey on the Northeast U.S. continental shelf. This annual survey started in the 1960s and has been instrumental in documenting changes in fish distributions over the last four decades. Photo: NOAA Fisheries.

When these regulations were designed, what happened? Did people not realize how variable things are?

We didn’t realize at the time how dynamic ecosystems are. People understood that ocean conditions varied from year to year, but not that things were trending in any particular direction. Today we understand that climate change and multidecadal variability is forcing the system in a particular direction, but those old assumptions are built into our management structure. So the question now is, how do we make our science and our management more adaptable to these changes that we know are happening.

If you look into the future for me, can you predict what our science and management will look like 20 years from now? What do you think is needed?

I don’t know what things are going to look like 20 years from now, but I can tell you what I think is needed. We need tools that will allow us to predict fish populations into the future under changing climate conditions. Climate scientists already have models that predict climate into the future. And fisheries scientists already have models that predict fish populations into the future without taking climate into account. We need to bring those two types of models together, and then use those coupled models when providing advice to managers. That’s going to require a lot more interaction between the traditional fisheries scientists, oceanographers, and the climate community.

What’s the cutting edge of research in this area?

On the climate side, the cutting edge involves scaling climate models down to the regional level. Today’s climate models predict future climate conditions over very large geographic areas, but fisheries are regional. What will ocean conditions be like in the Gulf of Maine, or on the Northeast U.S. Continental Shelf? Currently we don’t have what are called downscaled climate models for this ocean region.

We also need to models that provide climate information in the 10 to 20 year time frame. Most climate models predict conditions 50 or 100 years out, and that time horizon isn’t very useful for managing fisheries. There are a lot of efforts underway to make reliable predictions during a 10 or 20-year timeframe. That doesn’t help when setting catch levels, which require a 1 to 3 year forecast. But if a fisherman is deciding whether to buy a boat or to invest in a permit to fish for a given species, or if a town is deciding whether to invest in infrastructure for a fishery, having reliable projections on the 10 to 20-year time scale could be beneficial.

The other cutting edge is on the fisheries side. Rising temperatures affect fish populations, and we can analyze those effects statistically, but what are the mechanisms that actually drive those changes? In other words, what is the physiological response of fish to higher temperatures? What is the ecosystem response when predator populations increase or prey populations decrease?

Those are the connections between climate and fish populations in the real world. When we base our models on those biological mechanisms, as opposed to statistical relationships, that will be a big step forward. A lot of scientists—both climate scientists and fisheries scientists—are working on these problems. 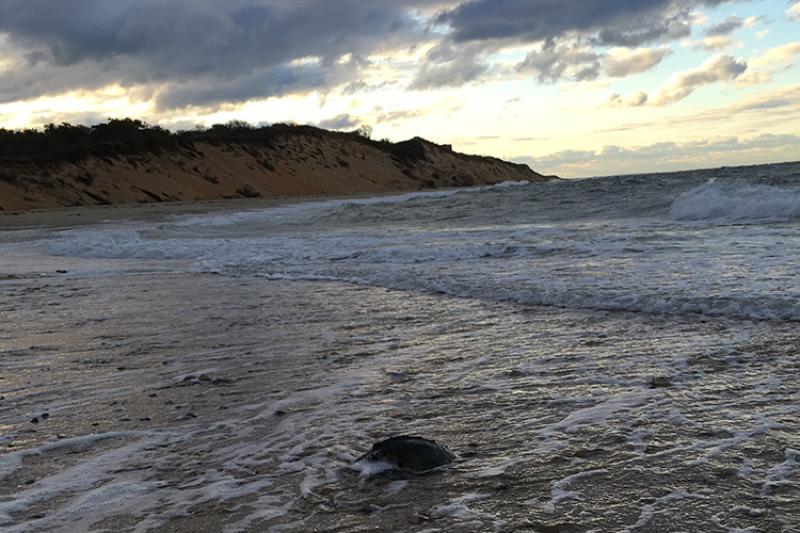 Last updated by Office of Communications on November 15, 2017 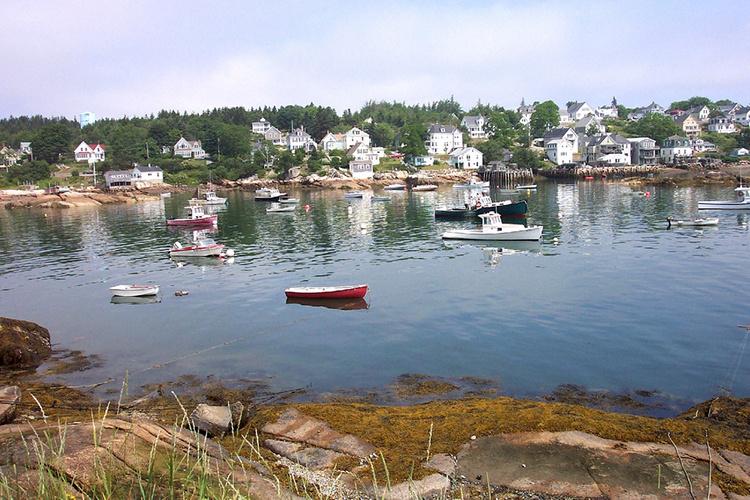