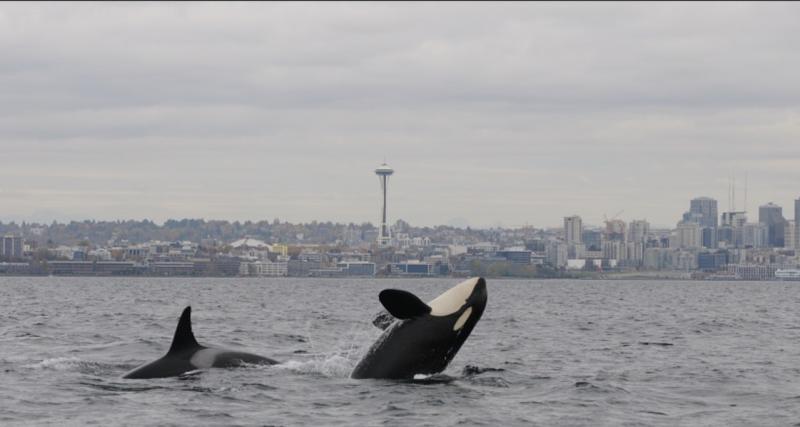 published in the Journal of Experimental Biology will help scientists better understand how much energy the whales expend while hunting and how much other factors such as vessel noise and traffic might disturb their foraging.

Jennifer Tennessen and her colleagues from NOAA Fisheries’ Northwest Fisheries Science Center temporarily attached tags with suction cups to 21 whales over four years to record their depth, sounds and underwater movements. That provided a trove of data the scientists could assess for movement patterns and the tell-tale echolocation clicks they use to locate prey.

“Once a fish has been detected, the killer whale angles its body steeply downward, begins a descent to depths of about 50 to 300 meters, and then remains underwater for about seven to 10 minutes while pursuing the fish,” Tennessen explained, noting that the whales may abruptly roll on their sides and change direction frequently during a pursuit.

The scientists discovered a particular series of underwater maneuvers by whales that are a tell-tale sign of a successful hunt. They then designed a computer program to detect those maneuvers in the whale diving data, identifying 126 occasions when the killer whales successfully intercepted salmon.

When the team categorized all of the deep dives that they had recorded and compared them to the successful hunts, they were surprised to find that some hunting dives were unsuccessful. Scientists had assumed that because diving deeply takes a substantial amount of energy that the whales need the energetic payoff of a successful catch to make the dives worthwhile.

“Because diving is costly from an energetic perspective, you wouldn’t expect a whale to dive very deep if it wasn’t chasing something,” Tennessen said.

The next step in the analysis will compare foraging behaviour by the whales during quiet times against other times with vessel noise and traffic to tell whether that is interfering with the hunting success of the whales.

The team also compared the number of successful hunts with instances when they observed the killer whales consuming fish at the surface. They discovered that some of the animals appear to consume their prey before reaching the surface – “underscoring…that surface observations alone can misrepresent the actual number of fish being captured,” Tennessen said.

The team also revealed that the males were diving more than the females. That likely reflects the greater metabolic needs of larger male whales.

“We’re developing a better understanding of how often the whales are hunting, and what kind of payoff they’re getting,” Tennessen said. “In the future, this could help with estimating deficits in meeting their metabolic requirements.”