Shylo Akuna was sentenced to four years in prison after the court found him guilty of harassment of an endangered Hawaiian monk seal. 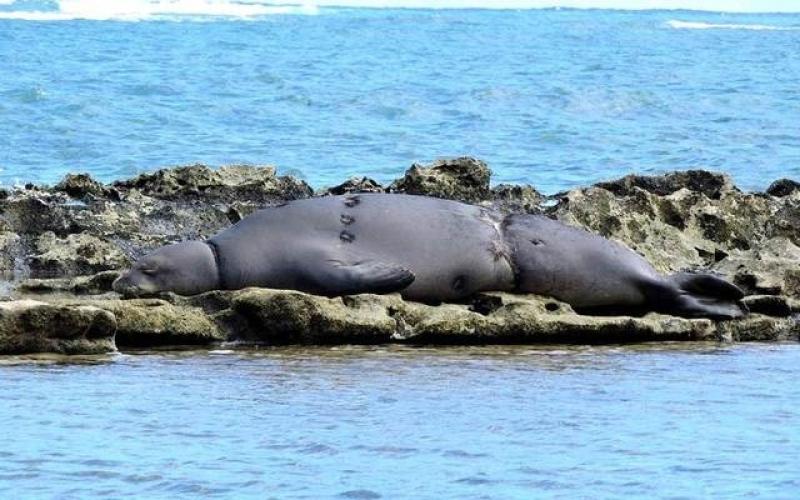 It took less than an hour for the video to go viral; less than two days for federal, state, and local authorities to make an arrest; and less than 15 months to resolve the case and send the guilty party to jail. On July 26, Shylo Akuna was sentenced to four years in prison after being found guilty of harassment of a critically endangered Hawaiian monk seal.

The horrific scene took place on April 26, 2016, at Saltponds Beach on the island of Kauaʻi. Luckily, the harassment was caught on video by witnesses on the beach and subsequently uploaded to social media where it drew worldwide attention and condemnation. The video showed a man, later identified as Akuna, approaching a resting pregnant monk seal, identified as RK-30, and punching the animal repeatedly. OLE was notified of the video almost immediately. The following day, OLE and its enforcement partners from the Hawaiʻi Division of Conservation and Resources Enforcement (DOCARE) interviewed witnesses and Akuna, who had already been identified as a suspect. At that point, Akuna admitted to being intoxicated at the time of the assault.

The seal, which was reportedly in good health after the incident, subsequently gave birth to a healthy pup. Jamie Thomton, NOAA’s Marine Mammal Response Coordinator in the Pacific Islands Region, explained that this particular seal is “tough.” He described how she also survived a previous shark attack and fishing gear entanglements, which have left noticeable scars on her body.

According to a press release from the County of Kauaʻi, Prosecuting Attorney Justin Kollar said, “Our natural environment is crucial to us in Hawaiʻi; this includes respect for our endangered species. To the best of our knowledge, this is the first conviction under the felony monk seal harassment statute and we are satisfied that the sentence was appropriate and will serve to protect the community from this defendant.”

Note: Hawaiian monk seals are listed as endangered species under the federal Endangered Species Act (ESA). These marine mammals are also protected under Hawaiian state law. Harassing a monk seal is consequently a violation of the ESA, the federal Marine Mammal Protection Act, as well as a state felony violation under Hawaiian law.

Last updated by Office of Law Enforcement on October 26, 2022