Not many people can say they've returned to a place of employment three times. For Katrina "Kate" Zewinski, her family's connections to commercial fishing and an internship brought her to NOAA Fisheries and a job she loves. 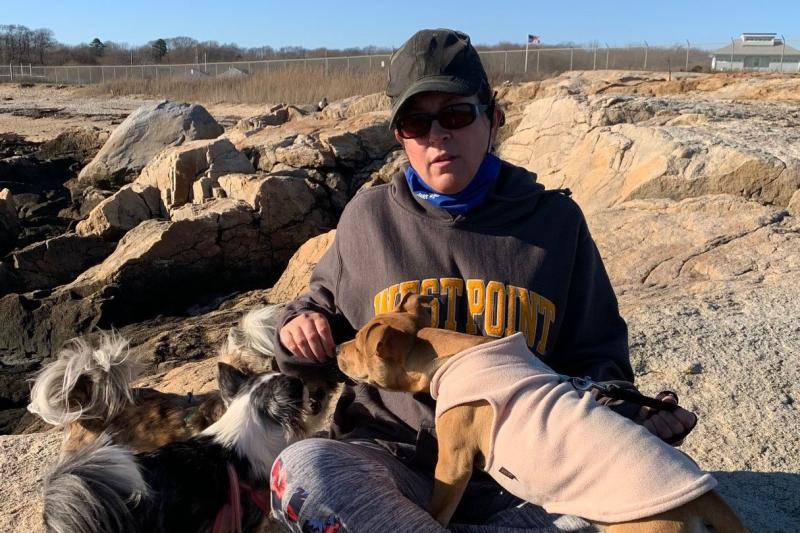 I was born in South County, Rhode Island. When I turned six, my family moved to Great Island in Point Judith in Washington County. We wanted to be closer to the fishing fleet and my father's work as a commercial fisherman. During those years my brother, stepbrother and I spent our free time digging for clams in the water just outside our back door. We also rode bikes around the island and to the docks to fish for mackerel.

My grandfather was one of 12 children. He, and several of his brothers and their sons, also fished out of Point Judith then and for decades to follow.

Some of my best memories are spending time on the boats and hanging around "the point." We'd find safe perches to watch from while they iced and fueled up for their next trip, or to watch them unload after returning. It was like a big family as most of the commercial fishing community knew each other very well. At one point we could go from boat to boat and ask for little jobs to make money for candy. The jobs usually included cleaning some area of the boat!

When I was nine, my grandfather taught me to mend nets and shuck scallops. There was always a net needing repair in a family member’s yard. Along with fishing, my father had a set-up for quahogging. He became owner of his own fishing vessel when I was in my early teens. He'd alternate between captaining trips and bull-raking for quahogs while the mate took the boat. A bull rake is a 3-foot wide metal basket attached to the end of a long pole. I would often join him, and had my own bull rake. I learned to cull, or select, only the larger clams by size.

During these years my mother was attending college working towards a degree in chemistry, which she later received. I often would go to her classes when my school was on break.

My parent's occupations and my love of nature and the outdoors impacted my wanting to be a marine biologist one day. At the start of middle school we moved back to South Kingstown, where I graduated from high school and received the Point Judith Fishermen's Scholarship.

I studied computer programming at the Community College of Rhode Island and at Rhode Island College. I received associate’s degrees in travel and tourism at the Ocean State Business Institute. When I started classes at Rhode Island College, my interest in marine biology was still strong but computers were making amazing advances. I was torn between the two. I was told by an advisor that if I truly wanted to become a marine biologist, attending a college in Florida would be my best bet. I was already living on my own and did not have the financial means or confidence to make such a big life change. I chose to move forward with a focus on computer science and programming. My mother worked for IBM, and it was just the type of company where I saw myself eventually employed.

How did you come to work at the Northeast Fisheries Science Center?

NOAA Fisheries and the Northeast Fisheries Science Center were not on my radar in college. Luckily, my advisor knew my family history in commercial fishing. He had me in mind when an internship opportunity became available at the Narragansett Laboratory in early 1994. I worked under Ken Sherman, recataloging his extensive manuscript library and helping with various receptionist duties when needed. During this time, I learned what NOAA Fisheries was all about and how it connected to my family's history in commercial fishing. My fondness for marine science was restored!

Upon completion of my internship, and despite interest in hiring me, a federal hiring freeze forced me to seek other employment. I moved on to work for the government contracting company SAIC. In early 1998, the hiring freeze had ended. A position opened up and I happily applied and returned to the lab. After the arrival of my second child in 2000, I made a difficult but meaningful choice to take permanent leave to raise my children. I rejoined the workforce in 2013 as office manager of a non-profit adult education center. In the summer of 2016, an opportunity arose to rejoin NOAA Fisheries, working in the Apex Predator Program’s Cooperative Shark Tagging Program. I am still here!

I manage tasks related to the Cooperative Shark Tagging Program. It’s the longest-running volunteer citizen science program in NOAA Fisheries and one of the longest of its kind in the world. I enroll new members and supply tags to existing members with the necessary supplies to tag sharks and to record and return data. Information on recaptured sharks with the program's tags help generate reports indicating the movement of the fish as well as growth. Both the original tagger and the recapture angler receive a copy of the report as a token of the program's appreciation.

I also assist with data collection from strandings and tournaments. These data can be used for studies on age and growth, reproduction, and food habits. Data entry for the program has gone from hard-copy coding in 1998 to a database created for tagging and recaptures. Entering data is much more efficient now, which is critical since the program has grown from hundreds to thousands of volunteers. It is also easier to pull research data for biologists. Much of the process by which members enroll, report data, and receive reports of recaptures remains the same as it did in 1962 when the program began. Program materials are updated yearly, or as necessary, with changes to rules and regulations. Taggings and recaptures are increasing.

Having grown up in a commercial fishing family, I've always felt connected to science and fisheries. During my early years at the lab I assisted the tagging program as needed. When I returned in 2016 as a contractor to work directly with the program, I was amazed to see there were active volunteers whose names I still recognized. To see that people cared so much to stay part of something for so long really says a lot. The program has grown exponentially, and I'm very proud to be a part of that. I've met many new people since returning to the lab, and I had the pleasure of rejoining some that were at the lab during my earlier years here. I'm not sure how many people can say they've returned to a place of employment three times, but I can say I truly love my job!

I love to be outside doing yard work, sitting by the fire, or watching the dogs play. I often take walks, collect sea glass from our favorite spot, and hike. On inclement weather days I like a good movie or documentary. When I find time I love to read, and usually have three books stationed around to dive into. Most every activity includes my three chihuahuas—Puck, Rosie and Gus—whom I adore.