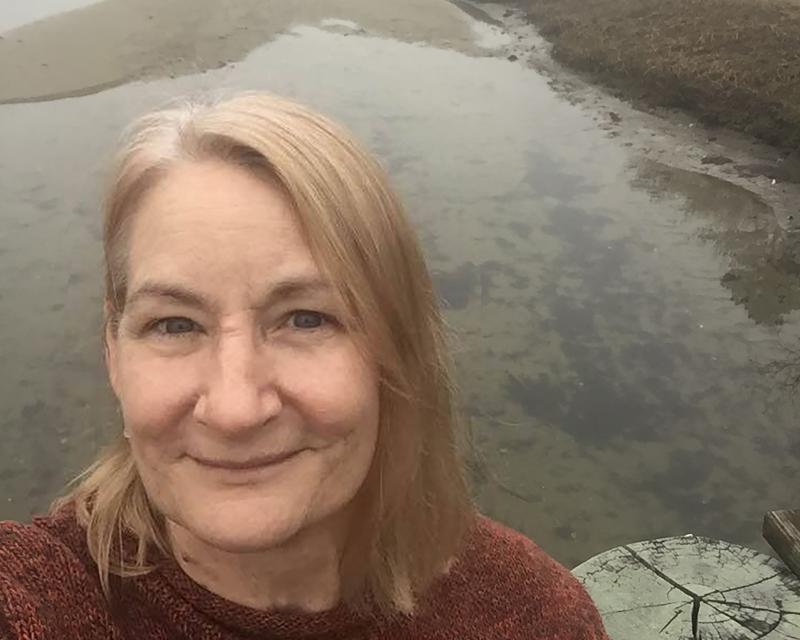 Susan-Marie Stedman is a Policy Analyst for NOAA Fisheries Office of Habitat Conservation. She has been with NOAA for 28 years and currently works in our headquarters in Silver Spring, Maryland.

Can you tell us about a project related to habitat that you’re currently working on or that you enjoyed?

Recently we released NOAA’s draft Mitigation Policy for Trust Resources for public comment. We started working on the project 5 years ago and throughout its development there were a lot of ups, downs, and delays. It took a team of more than two dozen people to explore all the issues, draft language, and untangle the complexities of different programs and authorities. I had never worked with such a large team before. I made mistakes, learned a lot, and am extremely proud of the final product. When it is finalized following the public comment period, the policy will help to conserve wetlands, mudflats, coral reefs, and other important coastal and riverine habitats. It means a lot to me to be part of something that will help protect the ecosystems I love!

When I first joined the office in 1993, I was part of an interagency team called the White House Wetlands Working Group. We met just around the corner from the White House and next to the offices for the Council on Environmental Quality. I always had a sense of being in a place where important work was going on. The purpose of the group was to resolve differences between federal agencies working on wetland regulations and policy. It was very inspiring to see people with fundamental disagreements find a way to overcome their differences and then go out for a beer together after the meeting.

Can you describe a time when you were surprised by fish and/or habitat?

I grew up with saltwater fish. I didn’t encounter freshwater fish until I was in training for my assignment as a Fisheries Extension Agent for Peace Corps Gabon in Africa. Another trainee and I were led to a rectangular fish pond, given a long net, and told to seine the pond for fish to grow in our own ponds. We were not told what was in the pond. When the net was full I reached into it and my hand was immediately jabbed by a tough spine. It turned out to be catfish, and I could not believe how dangerous those spines were! When our training ended and we harvested our ponds, I also discovered that a catfish will keep thrashing on the fillet table long after you’ve cut its head off. Catfish are amazing, and a little scary.

How has the office evolved over the years you’ve worked here?

I’ve seen amazing changes here and in NOAA since 1993. First of all, the workforce has become more diverse. When I joined I was the only female scientist in the Habitat Protection Division—now we have more women than men in the division of about 20 people. Women have also occupied every leadership position in the agency from Division Chief all the way up to Secretary of Commerce. The other major change has been in the complexity of the work we do. In 1993 we had only one major authority for our habitat protection work: the Fish and Wildlife Coordination Act, which dates back to 1934. Now we have additional authority under mandates like the Magnuson-Stevens Act, Coral Reef Conservation Act, and more. We have formed and expanded partnerships with other agencies to work toward common habitat conservation goals. We have also advanced the science of how habitat protection affects marine fish populations, giving us better tools for preventing the loss of habitat. All in all, it has been an inspiring and fulfilling place to work!

Last updated by Office of Habitat Conservation on August 06, 2022