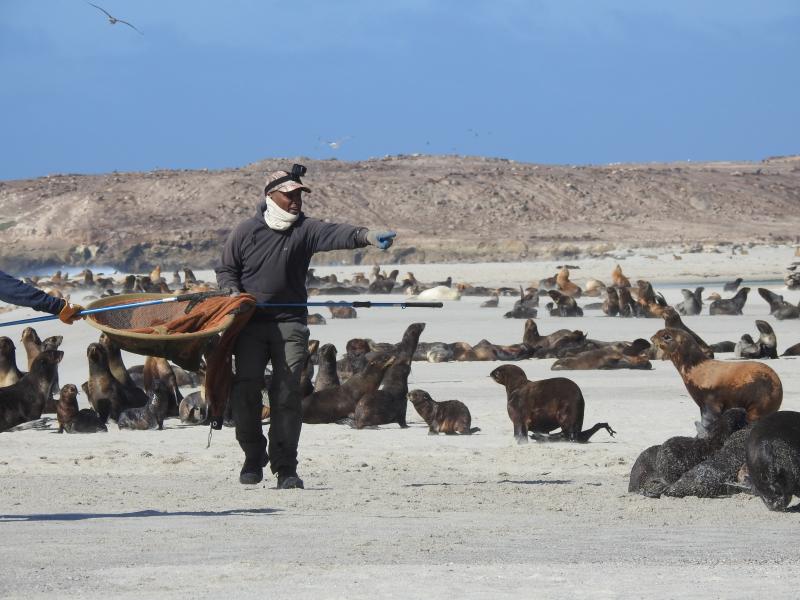 What are your key responsibilities?

I am responsible for leading a team to study the abundance, population dynamics, survival, and foraging ecology of the California stock of northern fur seals. I also collaborate with other scientists to conduct similar studies on California sea lions. With the help of veterinarians, we examine the health and diseases that affect both of these species. I am also involved in other research projects on several marine mammal species that inhabit the California Current Ecosystem. These include Pacific harbor seals, Guadalupe fur seals, Steller sea lions, and gray and humpback whales.

I grew up in Columbus, Ohio. During many summers of my youth, I spent time with my maternal grandmother and extended family in Thibodaux and New Orleans, Louisiana. Even at a young age, I was interested in science, the natural environment, and the critters therein. Part of that interest was inspired by watching The Undersea World of Jacques Cousteau and Mutual of Omaha’s Wild Kingdom.

I attended The Ohio State University where I received a B.S. in Zoology. I also had a focus on French. This was partially due to my Creole heritage but also because I am a linguaphile. After graduating, I moved to Aiken, South Carolina. I worked at the Savannah River Ecology Laboratory on a project examining the diet of fish inhabiting a nuclear power-plant cooling reservoir. We were particularly interested in the plankton composition of their diet and if it differed from that of fish in freshwater lakes in the area.

With a growing interest in aquatic ecosystems, I moved to California where I received a M.S. in Marine Sciences from California State University at Fresno. Much of my education occurred at Moss Landing Marine Laboratories, which has the wonders of the Monterey Submarine Canyon, virtually at its back door. During my time there, I received education and training in several disciplines of marine science. Specifically, I studied ichthyology; phycology; and physical, chemical, and biological oceanography. The focus of my thesis research was examining the diet and foraging behaviors of young California sea lions in the Bay of La Paz, Mexico.

Afterwards, I moved to Seattle, Washington to work in the Alaska Fisheries Science Center’s Marine Mammal Laboratory. While at the lab, I realized I needed to further my education in marine science. I received a Ph.D. from the School of Aquatic and Fishery Sciences at the University of Washington. The focus of my dissertation was examining how foraging ecology changed as immature California sea lions grew on San Miguel Island, California.

Can you tell us about your role as a mentor and volunteer?

Throughout my career, I have always felt that engaging students and community members in science was important. As a result, I am a volunteer member of Seattle Inspiring Connections Outdoors and former Tukwila team lead. The organization’s primary goal is to get low-income and underserved youth out of the city to experience and explore the great outdoors. We believe that the wilderness is meant to be accessed and enjoyed by all. I often give talks at local schools and at the University of Washington to help engage underrepresented and marginalized students in STEM and AVID programs.

At the Center, I am a volunteer member of the Team for Inclusion, Diversity, and Equity. We’re working with Center leadership on policies, procedures and practices to promote an inclusive workplace that reflects the diversity of the communities we serve. When I can, I participate in outreach activities to talk about our research activities. This includes taking part in numerous social media campaigns highlighting Black Americans in science such as #BlackAFinSTEM, #BlackMammalogist, #BlackInNature, #BlackinMarineScienceWeek (through California Sea Grant), and the Marine Mammal Science podcast.

What does Black History Month mean to you?

Black History Month offers a time to reflect on the trials and tribulations, as well as celebrate the achievements, advancements, and contributions of Black/African-Americans to this country. It is an opportunity for Black people to learn about their ancestry and heritage, some of which has been lost due to racist actions in the past and the reluctance to teach it in our schools. It is also a time for Black people to pay homage and thanksgiving to our ancestors who sacrificed and survived to allow us to be where we are today. It is a month for all Americans, regardless of ethnicity or social background, to focus on better understanding, listening, and becoming educated about Black Americans and their experiences in an effort to truly become an inclusive society.

Here is the advice I would give to today’s youth interested in a federal government career. First, I would advise them that there are a limited number of positions and the many applicants for those positions. They must be patient, be prepared to work hard, and stay steadfast. They should make sure that the mission and mandate of the federal agency aligns with their personal interests and goals. They should take advantage of any opportunities to speak with federal personnel in their field of interest and to volunteer on projects. Second, and perhaps more importantly, I would advise them to blaze their own path and not settle for walking on the easier, beaten trail. I would suggest that besides taking courses in their field, they take other courses completely unrelated to their primary interest. It is fascinating how those “unrelated” classes may eventually benefit them in their chosen career. Finally, I would recommend that they have interests and hobbies, and engage in activities outside of work. Life is short and there is a lot to do and see on this blue marble that we live on. Live a full life.