In October 2017, two visitors from the U.S. mainland sparked outrage when they posted a photo of themselves holding a Hawaiian green sea turtle (honu) on a Hawaiâi Island beach. The caption of the photo boasted: âMissing the time we risked a $20,000 f 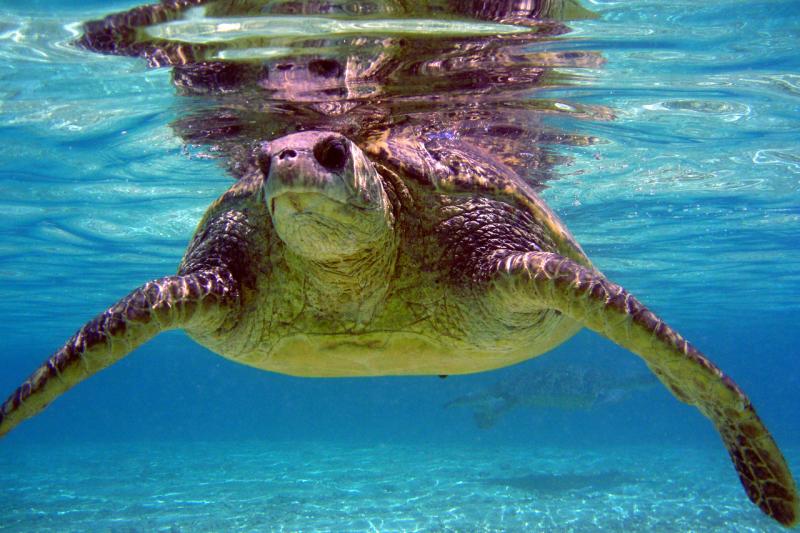 In October 2017, two visitors from the U.S. mainland sparked outrage when they posted a photo of themselves holding a Hawaiian green sea turtle (honu) on a Hawai‘i Island beach. The caption of the photo boasted: “Missing the time we risked a $20,000 fine to catch a sea turtle with our bare hands.” 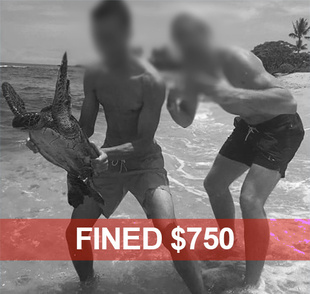 Two men holding and harassing a Hawaiian green sea turtle on the beach on a Hawai'i Island beach.

The tourists have now paid a $750 fine for harassing the helpless marine animal, bringing closure to an alarming event.

All species of sea turtles in U.S. waters are listed as either threatened or endangered under the Endangered Species Act (ESA). This listing means that the animals are protected under federal law, and actions that may harass, harm, pursue, capture, injure, or kill may be punishable through fines or jail time.

When the photo in question first surfaced on social media, local non-profit organizations and concerned members of the public reported it to the Hawai‘i State Department of Land and Natural Resources. The DLNR's Division of Conservation and Resources Enforcement (DOCARE) began an investigative case to determine if legal action was required; they eventually transferred the case to the NOAA Office of Law Enforcement.

Aided by the thorough investigation that DOCARE had initiated, NOAA's Office of Law Enforcement was able to locate and interview the men involved. During the interview, the two suspects admitted their guilt and were subsequently issued a Summary Settlement (fine) regarding their illegal actions of capturing a Hawaiian Green Sea Turtle. The suspects chose not to contest the Summary Settlement and with the aid of their families paid the $750.00 fine.

Irene Kelly, NOAA's sea turtle recovery coordinator, responded to the situation: "I am pleased with the speed of enforcement action and attention to this case, but I am even more impressed by the public's response on social media. The public outcry and shaming these men received from their peers is encouraging and probably the best outcome we could have hoped for. Such actions of sea turtle harassment are unacceptable, discouraged, and clearly disrespectful."

NOAA encourages the public to view sea turtles responsibly from a distance of 10 feet (3 meters). Although the men were fined $750 for their actions, an ESA violation can incur much more significant penalties depending on the severity of the violation or degree of take: Civil penalties can exceed $50,000 and Criminal penalties can include fines of up to $100,000 and imprisonment of up to one year.

This case is not the only time that someone has been penalized for harassing a sea turtle. A Florida man was sentenced to 30 days in jail for lifting a sea turtle out of the water in 2015.

Penalties may also be imposed for harassing or harming other marine species in Hawai‘i — such as the Hawaiian monk seal, humpback whale, or Hawaiian spinner dolphin — that are protected by the ESA, Marine Mammal Protection Act, or Hawai‘i state laws.